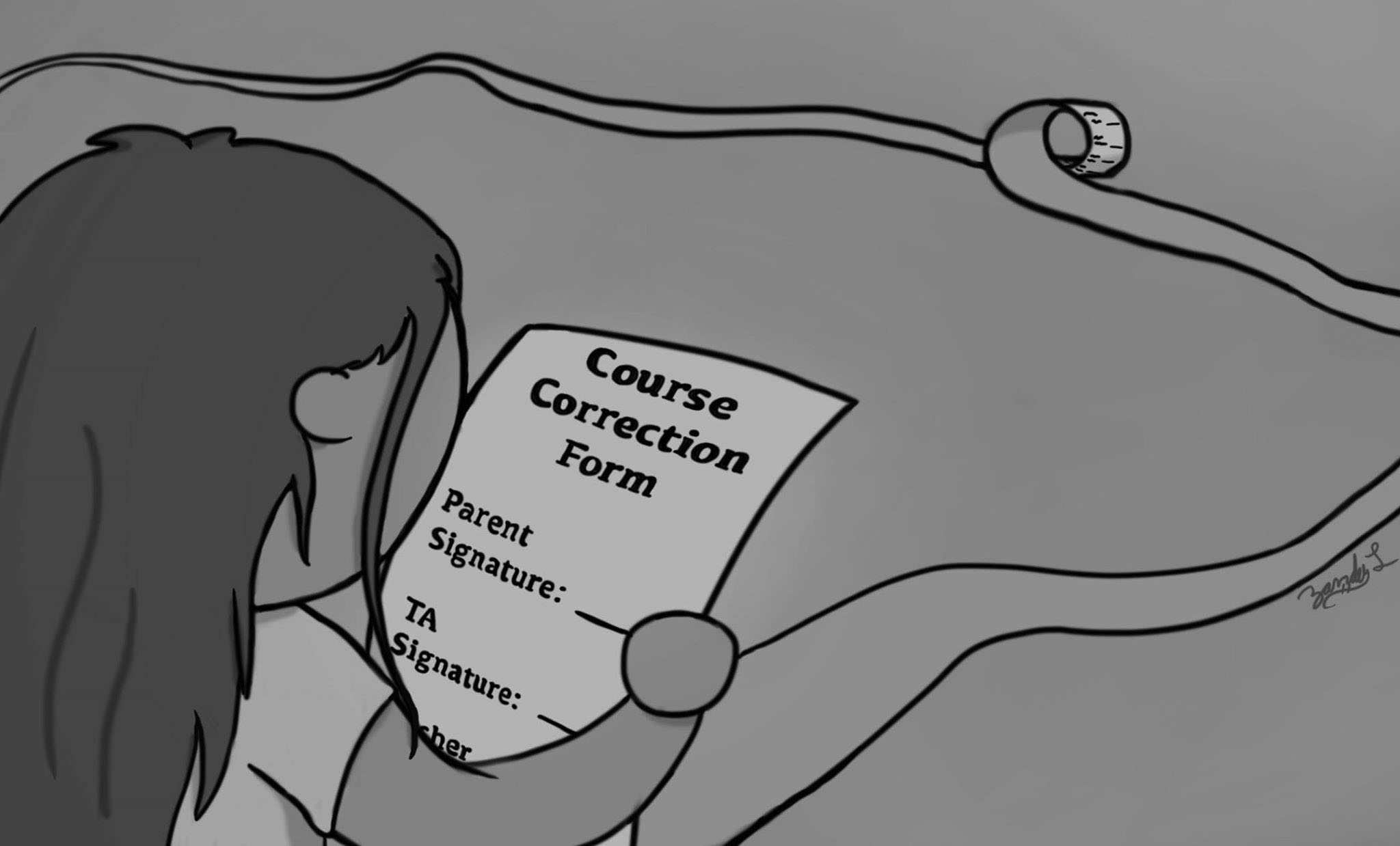 For the first two weeks of school, the main office was a little short of a battlefield: long white tables blocked the entrance to the Guidance Department with several faculty members managing to hold down the overflow of students trying to change their schedule.

Students with varying needs — from a minor schedule error, to trying to drop or add a class, to simply wanting to know the available classes during a certain period — find themselves in long lines, having to wait an extensive amount of time to have their requests filled. The current system is intended to save time, as it should, but it has serious flaws that deter from this goal.

Many students wait in line to simply find out if a class has open space, or to ask about which classes are offered during a certain period. To avoid this issue, an online master page should be established on the Paly website, listing which classes are available during which period, and whether or not those classes are full.

This change would significantly reduce the number of students waiting to ask question that could be answered at the touch of a buttons. Additionally, it would increase the transparency level for students who might simply be curious about when specific classes are offered.

Currently, a student might feel dissatisfied with part of their schedule, but won’t know if there’s a way to change it effectively. The extensive system in place to be able to speak with a guidance counselor severely deters students wanting to find out more about a potential change to their schedule. Improving the transparency level would better inform students about the popular Paly classes, and it would reduce the number of Paly students that need to speak with faculty members to ask simple schedule questions.

According to Katya Villalobos, head of Paly’s Guidance Department, the staff tries to be understanding of students’ wishes to balance out their more difficult, time-consuming and intensive classes.

“For students that have at least two or three APs, if they have them all on even days, we understand trying to move them to balance them out,” Villalobos said.

However, for changes other than moving class periods, the process appears to be much more complex.

“Any time you drop or add [a class], we’re asking for the student to sign, the parent to sign, and the [teacher advisor (TA)] to sign,” Villalobos said.

In other words, for changes other than shuffling class periods, each student must go through the tedious process of getting their parents to sign a sheet, as well as the job of hunting down their TA to ask for their signature.

This entire process can take several days — which extends the number of days a student has to uncomfortably sit in a class they are certain they will be switching out of. It also increases the number of days they miss out on their potential class, allowing content and assignments to pile up.

Both the parent and TA signatures are steps that seem useful at first, but end up being an unnecessary hassle that doesn’t help with the process.

First, instead of confirming that parents agree with students who wish to drop a class via signature, admin should have faith that students are not making a decision that vehemently disobeys their parents’ wishes.

Students understand that their parents will find out about the classes they’re taking through Back-to-School Night as well as progress reports and report cards that are sent home very regularly.

Secondly, obtaining a TA signature is a huge hassle for students that does not provide them with any help, outside of rare cases. Students who have been exposed to the process of creating a schedule for themselves, for at least three years of middle school, are capable of deciding if they want to add or drop a class on their own.

According to Villalobos, the TA signature is a vital part of the process.

“We want to make sure the TAs are aware of what the students are deciding, because they help you academically plan, and they help you with the transcript and making sure you know all the ins and outs,” Villalobos said.

However, the help that is intended for the TA to provide to the student is assistance that is generally provided by the guidance counselor who processes the change before performing the schedule change. Discussing graduation requirements, as well as any other implications is something the guidance counselor is much more equipped for, considering they have access to the classes that are available during each period and have those conversations several times a day.

Realistically and logically, however, there are cases when the TA and parent signatures should be required. If a student tries to switch their schedule in order to not take a math or science class, that’s a decision that should be discussed with the parents, as well as with the TA.

In this case, that decision is one that’s very personal to the student, meaning it would be more beneficial for them to have that conversation with the TA who knows them better than a guidance counselor.

Additionally, the process with signatures is very applicable to lane changes. According to Villalobos, the student, parent and TA signatures aren’t the only ones requested when attempting to switch lanes.

A lane changing decision is one that can have a serious domino effect, so in that case, it makes sense for the decision to have many required steps and signatures.

Those signatures, however, aren’t needed for more simple schedule changes, and the several aforementioned changes should be implemented to severely increase the effectiveness of the process.