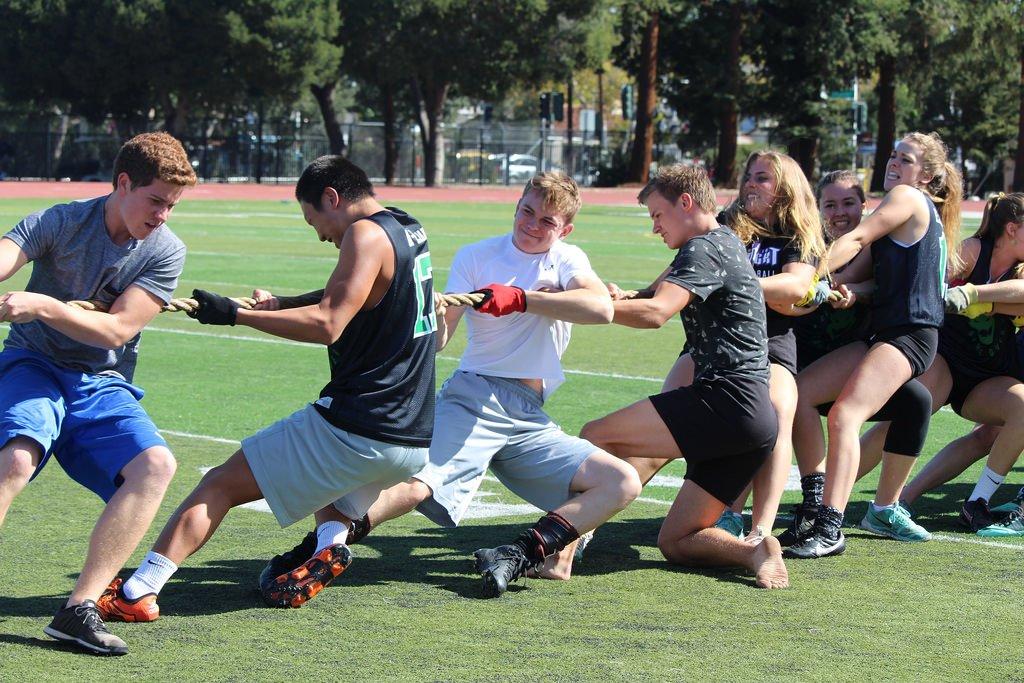 Combining old favorites, like tug-of-war, with new events involving hamster balls and inflatable ponies, the Associated Student Body (ASB) hopes to freshen up this year’s Spirit Week while still maintaining the tradition that is loved and cherished by many Paly students.

“Spirit Week is arguably Paly’s biggest and most anticipated event of the year,” ASB Secretary Charlize Nguyen said. “With dress up days, games and cheers every day of the week, this involves months of preparation from ASB.”

According to Sophomore President Adora Zheng, in preparing for Spirit Week, ASB officers and commissioners thought thoroughly about the inclusiveness of each game and put their energy toward making each activity one that would draw a wider range of participants.

“[There is] a new set of games this year, with hamster balls and Hungry Hungry Hippos instead of the 3-point contest in order to increase participation and more. Of course, students can expect to see favorites like tug-of-war and Name That Tune as well.”

Though tug-of-war and Name That Tune allowed for wide participation, some of the other games last year, specifically the 3-point contest, were less inclusive. The 3-point contest restricted participation to only a handful of students, predominantly basketball players, which prevented a majority of students from signing up. The new activity, Hungry Hungry Hippos, will be added in its place and encourages much larger teams of students to sign up regardless of their athletic skills.

The rally game that will be during advisory, Hungry Hungry Hippo, consists of students using baskets to bring balls from the center of the court back to their team while laying on a scooter board. Though the rules are not finalized, the new game will allow for larger participation.

“In terms of games, ASB is introducing a Pony Hop where students will jump across either the field or track on an inflatable horse,” Nguyen said.

Video tutorials explaining the new games will be published in the coming weeks to help students understand the rules and encourage sign ups.

Another activity that will see some changes this fall is the float building competition. A new scoring system will be implemented that focuses on the small details of each grade’s float and will allow for more transparent judging.

“In the past, floats have been scored on three things: stuffing execution, theme incorporation and creativity. This year, stuffing will only be worth half the amount of points it was worth before and a new category will be added. This category will focus on the complexity and details of the float.”

With the new scoring process, float builders will focus on the intricacies of their design and creativity of their ideas. All students, regardless of float building experience, are encouraged to contribute to their grade’s float, which will be displayed throughout the week.

“I would strongly recommend all freshman, especially those interested in art, help out with the float,” Senior President David Foster said. “I was a new freshman at Paly when I first helped with float building and it was one of the best decisions I ever made.”

While float building and participating in activities is a fun way to contribute, the easiest way to help your grade is simply to dress-up every day of the week. In recent years, ASB has made it easy to find gear for those who are willing to exchange an article of their own for something new that fits their theme.

“For students who do not already have the dress-up gear, ASB hosts a Spirit Swap right before Spirit Week. This is a small event during lunch where students can exchange clothing items that fits one of the dress up themes with another item they may need.”

With Spirit Week less than a month away, students are beginning to find gear to exchange, signing up for activities and buying a bag of cough drops for all the cheering they’ll be doing.

“If you’re on the fence about participating or want to learn more, talk to a member of ASB [or] upperclassmen,” Nguyen said. “Spirit Week is a key part of Paly tradition and it’s an amazing time to promote class pride and unity.”