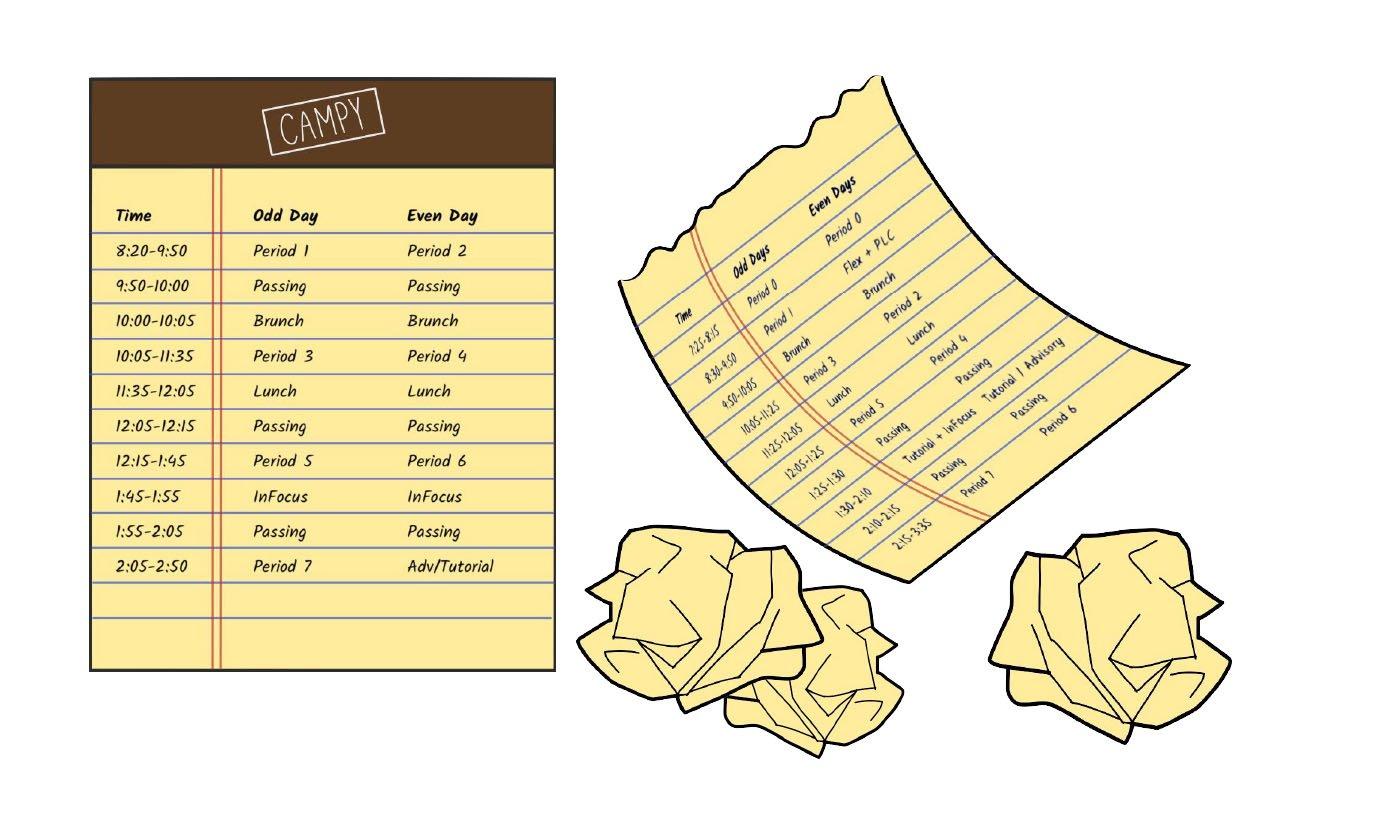 Despite all the upheaval last school year, with dual resignations by the District Superintendent Max McGee and Paly Principal Kim Diorio, one thing seemed assured: Paly would have a new, redesigned bell schedule this year featuring late and flexible start times, tutorial four times a week, and most importantly, the elimination of seven-period C days.

But behind the scenes, chaos was brewing, and on graduation day itself, Diorio learned the  disheartening news that Paly’s heralded new bell schedule, a product of more than seven months of hard work by both students and staff, would have to be scrapped.

A summer of scrambling lay ahead in order to produce yet another new schedule. The end result was the schedule that is now in place, with no late start times or frequent tutorial periods that had been largely embraced by the student body.

Instead, students were given five more minutes of sleep than last year with an 8:20 a.m. start time and a five-minute later dismissal. Additionally, what was previously known as Flex time turned into tutorial periods every other day. The one aspect that the new schedule shared with the scrapped one was the removal of C days.

The Campanile found that several factors contributed to the costly scheduling snafu: a committee striving to be creative, a consultant who seemed unsure of the rules, a state office that demurred and finally, a Palo Alto citizen who protested. In the end, it was the citizen’s unexpected complaint that set the revamp in motion.

Eleven days before the start of the school year, Paly students, parents and staff learned of the drastic revisions, all brought about because the planned bell schedule had fallen short of the state-required instructional minutes.

It was a particularly harsh blow to Diorio, who had envisioned that the schedule would be appreciated for its innovation and creativity. Diorio said she imagined that consultants would flaunt Paly’s schedule and say, “‘look at what Palo Alto High School is doing!’”

It seems the shortfall was nothing new. Digging into the details, Diorio learned that Paly’s bell schedule had been non-compliant for several years without any repercussions. However, this was forced to change two years ago, when the principal of Gunn at the time, Denise Herrmann, referenced Paly’s non-compliance while addressing Gunn’s bell schedule problems.

Following the discovery of insufficient instructional minutes, Paly established the Bell Schedule Review committee in the 2016-2017 school year, and then at the start of last school year, established the Innovative Schedule Committee (ISC), a favorite undertaking of Diorio, who saw bell schedule revisions as a way to decrease stress while increasing learning. The committee worked tirelessly over the course of seven months to produce a schedule that would not only comply with California’s requirement of 64,800 annual instructional minutes, but would also improve the lives of Paly teachers and students.

The ISC was comprised of 18 Paly students, parents, staff and community members; at the head of the committee sat Diorio, Paly’s principal at the time. The committee met twice a month until the end of February, blowing through dozens of drafts and paying thousands of dollars to an outside facilitator.

According to ISC member and Paly senior David Foster, the main goal of the ISC was to “respond to community desire . . . [understand] what the community wanted and [understand] current research for students and teachers and schools, and then [combine] that to create an innovative schedule.”

In an attempt to maximize student learning and engagement, the ISC explored various options and ideas to implement into the new schedule. Advisors such as Denise Pope, co-founder of Challenge Success, an organization whose goal is to “implement research-based strategies that promote student well-being and engagement with learning,” according to its website, and senior lecturer at Stanford’s School of Education, were brought in to help stir up ideas. The ISC held focus groups and sent out surveys to students and parents to gain input on the schedule.

Hours upon hours of research and deliberations led to some bold recommendations: the elimination of “C” days, the implementation of daily midday tutorials, block days that alternated on a two-week rotation and flexible, later start times—as late as 10:05 a.m. on some days. The changes would be largely beneficial for students, Foster said.

When the ISC crafted its final bell schedule, the proposal, still pending Board approval, was released to students on Infinite Campus in February. While there were some complaints, such as athletes concerned about a somewhat later end to the school day and people who wanted more hours in traditional classroom settings, students largely welcomed the change.

Adding to the momentum was a decision by the PAUSD School Board to not review the proposal. As stated in Board Policy 6112, “the Board of Education shall fix the length of the school day subject to the provisions of law,” meaning that the Board is responsible for reviewing the number of instructional minutes to ensure compliance.

However, School Board President Ken Dauber and Vice President Jennifer DiBrienza saw no urgent need for school board approval.

“We knew a lot of work went into it and the committee was happy with it, so as long as it was compliant in instructional minutes, we saw no need to review it.”

Jennifer DiBrienza, in an email

Why didn’t they feel it was necessary? According to DiBrienza, it was because they knew that all the while the ISC was working, it had been running its ideas by an outside auditor hired by the district, Sheldon Chavan, whose job was to audit the District finances and to interpret compliance with California mandates for instructional minutes, according to DiBrienza.

After looking over the work of the ISC, the School Board deemed the situation a site-level issue, giving Diorio and Adam Paulson, Paly’s assistant principal at the time, full power to design the schedule so long as Chavan approved the instructional minutes. According to Diorio, whether minutes in a schedule count as instructional or not depends completely upon the interpretation of the auditor, who is required to follow state guidelines.

“External auditors have the responsibility of auditing a school district’s instructional time per the procedures in the audit guide,” California Department of Education Information Officer Cynthia Butler said in an email.

For a while, Chavan’s interpretation of minutes lined up with the committee’s, according to Diorio. Over the course of its deliberations, the committee had wrestled with the question of whether certain types of non-traditional school time could count as “instructional minutes,” including:

Chavan informed the committee that zero periods and blended periods were counted as valid instructional time, according to Samuel Howles-Banerji, Paly chemistry teacher and ISC member. The ISC then took this information into account when drafting and revising its final bell schedule.

“I gave [Chavan] all the information from the year prior, about zero period and 8th period classes,” Diorio said.

The auditor then deemed those periods valid instruction time, and gave the committee the all-clear, according to Diorio.

Chavan did not respond to repeated attempts by The Campanile to reach him by phone and email and therefore could not confirm whether he felt fully informed by Paly about zero period, tutorial periods and other scheduling details.

In any case, Dauber and DiBrienza were relying on him.

“The auditor would either find [the schedule] compliant or would not . . . This was the only factor with which we were concerned,” DiBrienza said.

Finally, after much back and forth, the schedule was approved by the auditor, streamlined past the School Board in spring and set to be implemented for the upcoming school year. But unbeknownst to the committee, a community member was challenging the legitimacy of the new bell schedule.

According to Diorio, a member of the Palo Alto community filed a complaint with the Santa Clara County Office of Education questioning the interpretation of zero periods and blended periods.

“We found out there was a complaint filed by a parent with the county that we were short instructional minutes and the county [had] contacted the auditor and the auditor [was] looking into it.”

Both the Santa Clara County Office of Education and officials at PAUSD said they had no details about the complaint.

This time, Chavan changed his mind, saying zero period could not be counted toward necessary instructional minutes, according to Diorio and others on the committee.

“[Chavan] gave us one set of information about zero period in January, which we used to build our schedule,” Howles-Banerji said. “Then, in the end of May, he gave us a different piece of information that conflicted directly with what we had been told.’’

And so it was that when Diorio stood handing out diplomas, the bell schedule debacle lurked in the back of her mind, and she knew the clock would begin ticking down as the committee would have to scramble to craft a completely new schedule.

“Mr. Paulson tried to loop people in as he could, but it was summer and people were dispersed to the winds, and it was kind of a ‘we need to figure out an option,’” Howles-Banerji said.

Paulson, newly named as Paly principal, stepped in for those crucial months to guide Paly to a solution.

“I didn’t have much of a summer, as far as getting away from this place,” Paulson said. “I just wanted to make sure that I started with something that we could work with, and that would work for students, and I think the biggest piece was just getting rid of that C day… the most important thing is to make a schedule that’s best for students.”

The group met once right after the school year ended, and then throughout the summer with whoever was available. In mid-summer, the District decided to work with a new auditor, Christy White from Christy White Associates of San Diego.

“She, from what I could tell, was super responsive, responding to emails multiple times a day, as opposed to once a week,” Howles-Banerji said.

White, PAUSD’s bond and performance auditor, stepped in to audit the new proposed schedule, looking at teacher supervision, passing times, flex times and tutorials. White consulted the California Department of Education about whether or not to count tutorial time as instructional minutes but received only a “preliminary conclusion.” White’s office declined to comment.

The end result of the committee’s efforts: the loss of late start times, optional flex periods and teacher collaboration time and more than $37,000 spent on a schedule that flopped.

“It wasn’t perfect, but I think we came up with a schedule that works for students and staff this year,” Paulson said.

ISC members refuse to be discouraged about the future of the bell schedule.

“One of the hopes is that in the future we can still use the data that we so tirelessly gleaned in order to make a great bell schedule,” Foster said.

Diorio’s vision goes beyond Paly’s borders. “The culture of compliance and the culture of innovation are at odds,” Diorio said, in reference to state instructional minute guidelines. “You can’t be creative and innovative when you’re being held to the bureaucratic playbook.”

For his part, Paulson agrees that there is still hope for Paly to create the ideal schedule.

“We’ll reconvene this next year and then really have an inclusive process,” Paulson said. “I want to include students, parents and teachers again, and then go through slowly and work through all issues. We’ll dust it off and, you know, come back to the table,” Paulson said.

Will an innovative yet compliant bell schedule emerge?

Only time will tell.