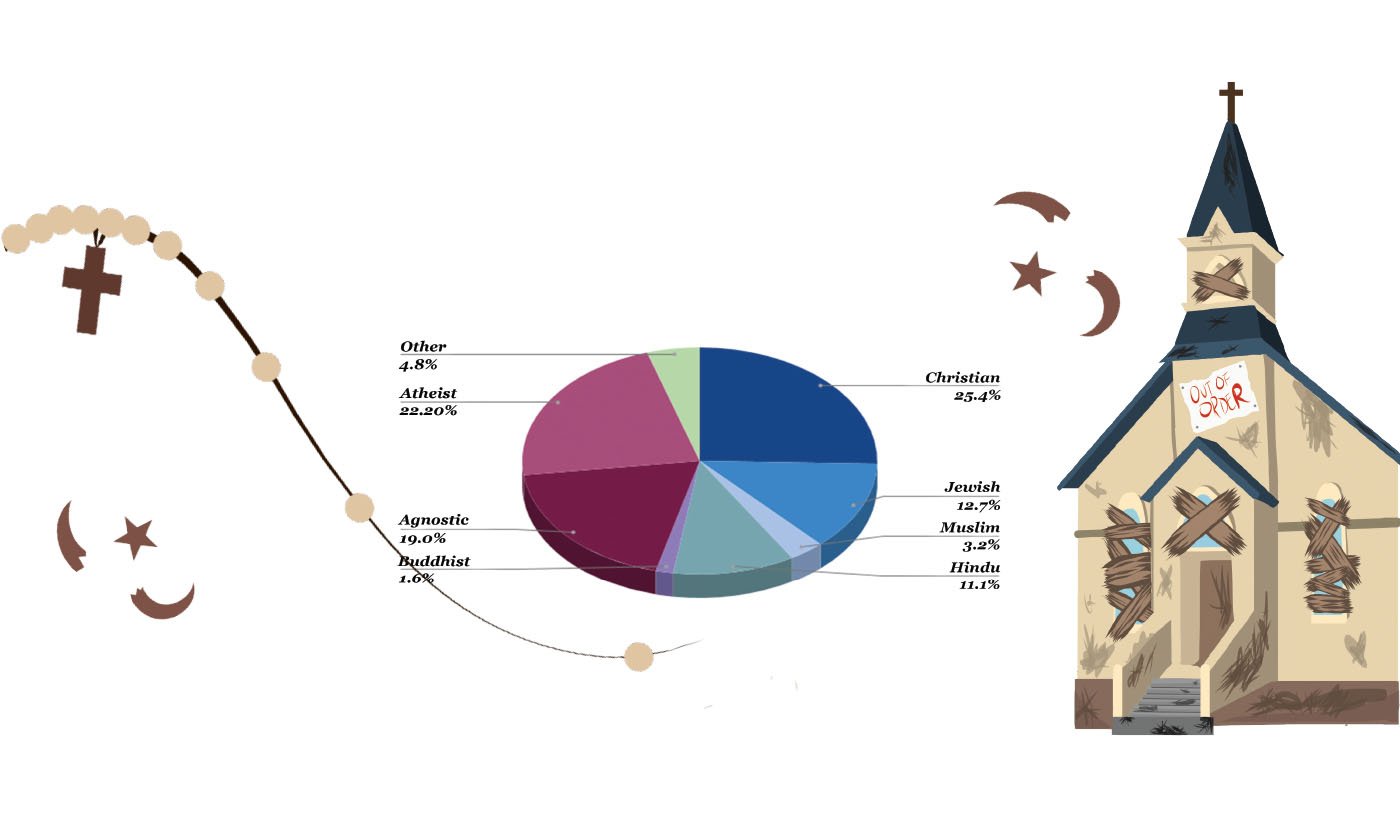 Is God Dead?” in bright red dominated one of the most iconic covers of Time Magazine in 1966. The cover story, written by religion editor John Elson, focused on professor William Hamilton of Colgate Rochester Divinity School and his belief that God’s death caused him to leave his job and home. As a result, Time received backlash from citizens and publications challenging the controversial statement.

“As always, faith is something of an irrational leap in the dark, a gift of God,” Elson wrote in the article. “And unlike in earlier centuries, there is no way today for churches to threaten or compel men to face that leap; after Dachau’s mass sadism and Hiroshima’s instant death, there are all too many possibilities of hell on earth.”

Published in the era when religiously devout global citizens watched as “Godless” communism stretched across Eastern Europe, Asia and Latin America, people in the United States were quick to declare concepts of atheism and agnosticism as radical and dangerous to capitalism.

Fifty years later, being religiously unaffiliated is not quite so disfavored. In fact, the religious “nones,” or those who do not identify with traditional religions, account for the second largest religious group in the U.S., following Christianity. According to National Geographic, this may involve a number of factors, one of which is the world’s most recent technological advancements.

Husna Hashmi, a local mosque organizer, says she tends to see a good number of local youth attend religious activities and socialize with peers. Although the advantage of extremely accessible information online has allowed for humans to better establish their beliefs regarding the unknown, such as God, angels, and other supernatural concepts, she says she has seen some aspects of technology negatively affect communities as a whole.

“Technology can be a great resource, but tends to take away from face to face interaction, religious experience and socialization benefits,” Hashmi said. “It can be difficult to fully embrace religion without understanding, seeing and practicing with others in a faith based environment. Youth are more distracted today with technology than ever before. Earlier generations didn’t have constant distractions. Their religious upbringing was given importance and valued by the society. ”

In the U.S., young adults are more likely to be religiously unaffiliated, even though the majority have grown up in religious settings. Humanities teacher Mimi Park said this nation-wide shift has had an affect on how religious students act in her class.

“There’s a fear that those who are [religiously affiliated] won’t be taken seriously. There’s such a high value on rationality that to profess to believe in something that requires faith rather than rationality is what people worry about. There is a social pressure to not say anything, and so it has taken a lot of my very religious students some years to become comfortable about sharing their faith to their own friends, especially when they don’t share their beliefs.”

Park said that although there is not a widespread fear of expressing personal faith, unlike certain areas of the world where people are targeted for their religion, there is a slight stigma that may cause students to tire of explaining beliefs.

“They get tired of defending themselves, defending their faith, essentially,” Park said. “It’s important to talk about differences of faith, but continuously debating one’s identity might cause students to keep it more personal. They don’t want to state their belief and then have ten people go ‘Wait, why do you believe that, can you provide evidence?’”

Scientific advancements have also caused people to question God, according to Hashmi.

“Young adults are immersed in an environment where they see science as having the answers and delivering results which can been seen, understood and proved,” Hashmi said. “It’s what they may rely on, are familiar with and turn to for solutions.”

In Silicon Valley specifically, the incredible amount of technological research and growth might be causing a substantial decline in religious affiliation, which according to Park, is a misconception.

“It is a stereotype that the majority of the Silicon Valley is agnostic or atheist, because, in my time teaching humanities, I find that there is a very substantial core in every single class of people who are very devout in faith, even if they don’t outwardly express it,” Park said. “Some of the things I’ve heard from my students is that it’s very unpopular in this area to express that one is very religious because it seems so outmoded [and] so counter to the value of STEM (Science, Technology, Engineering and Math).”

According to Hashmi, the trend seen in people leaving religious identity, for one reason or another, might describe a phenomenon regarding the state of religious centers. Churches around the world often go out of business due to a lack of interest in religious communities.

“Younger generations may be stepping away from faith because religion may not serve a clear purpose in their lives yet. What may be causing this trend is lack of knowledge, time, disinterest, being oversubscribed and negative messaging around religion by the media.”

Although being religiously unaffiliated continues to gain popularity in certain areas in the U.S., Middle-Eastern and North African regions are experiencing the opposite effect. Habiba Mekay, a Paly freshman who identifies as Muslim, moved to Palo Alto from Egypt the summer before her freshman year. She said she experienced a shock as she adjusted and continues to adjust to her life in America.

“In Egypt, being Muslim is pretty normal,” Mekay said. “Some people just say they’re religious because their parents follow a religion, but most people I know still had a religion …  Here, I feel as if everyone stares at me and thinks I’m weird for showing my religion [by wearing a headscarf].”

Park said geographic location plays a significant factor in the religious behavior of adolescents and young adults. In areas where religion is a large part of culture, Park said it becomes natural to profess religious identity. However, in places where religion is not central to common lifestyles, religious affiliation becomes that much more private.

“There are certain religions very intertwined with culture,” Park said. “For people who are part of those faith systems it will be easier because it’s not just faith, but it’s part of their culture so it seems more acceptable in that type of society versus when someone is strictly talking about their spiritual faith.”

Mekay said one of her first friends in America did not believe in God. Their difference in beliefs allowed them to have respectful debates, each trying to justify her own opinion.

From experiences with her friend and exposure to American culture, Mekay said people choosing to be religiously unaffiliated might have something to do with their resulting freedom.

“If you’re not religious, you’re kind of free to do anything,” Mekay said. “There isn’t a set wrong or right laid out by a religion.”

However, Mekay notices the greater religious diversity in America allows those who are affiliated to become more devout, contradictory to what she saw in Egypt.

“Here, [religious people] know that other people around them follow different religions, or don’t even follow one,” Mekay said. “So they try to focus more on their religion and aren’t influenced by the [beliefs] of other people.”

Those who choose to go online to access information and form beliefs regarding the supernatural may not be exposed to opportunities of observing different faiths. Accordingly, seniors Jared Yang and Leon Lau, presidents of the Christian Club on campus, hope that their club will serve as an open environment to all Paly students curious about the world’s largest religion.

“Religion is a good way to get a strong foundational moral background,” Yang said. “A lot of the times we think that religions are mysterious, and so a lot of people don’t really know about the major world religions. I think it’s good to raise awareness on campus to learn more about what religions are about and then make a decision from there.”

Yang said the drift towards the state of being religiously unaffiliated might have to do with the deterioration of traditionalism in present day.

“In younger generations, we’re seeing this large trend of turning away from institutions of tradition in general,” Yang said. “People are turning away from concepts, basic family structure and traditional values. It’s hard to say if this is a good or bad thing, but it’s a rejection of the way things have been.”

Lau said younger age groups are more likely to be affected by their peers.

“The environment and culture of this generation has changed,” Lau said. “The people that influence us have changed their beliefs.”

Although being religious has seen a downturn over the past few generations, it will not be impactful enough to affect the amount of religious growth across all age groups, according to Demographic Research.

Hashmi says that in order to counter lack of interest in her younger Muslim community, she plans to create more youth-oriented activities that will bring attention away from distractions and toward their faith.

“On Palo Alto Unified School District (PAUSD) minimum days & holidays, we anticipate and plan see our youth attend prayer services which are geared toward them,” Hashmi said. “We recently started a program on Friday evenings, providing students a place to gather with friends.”