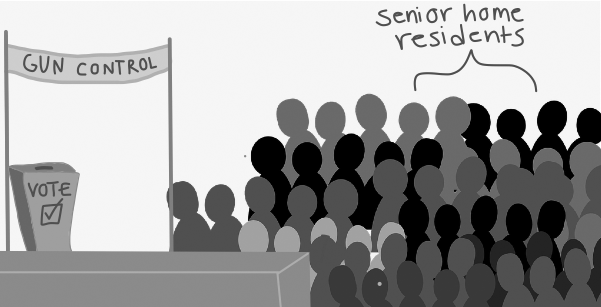 Voting age for school board elections should be lowered

As students progress through the journey of high school, constantly being affected by the inner workings of the school district, it is essential that they have a say in the way their schools are run. Lowering the voting age to 16 years old for the upcoming school board election allows for students to address issues that directly affect their lives.

The Palo Alto Board of Education elections are to take place on Nov. 6.

Residents will vote to fill the spots of five school board positions and the Palo Alto Unified School District (PAUSD) will vote to support two of six candidates.

It is clear that many differences of opinion lay between teenagers and parents in this community. Topics including freedom, privacy and academics are all examples of disagreements that occur within the typical family. As of now, parents and other adults in the community are in charge of voting for high schoolers educational representatives.

How can students be assured that adults are voting in the student’s best interest and not furthering their own agendas?

Juniors and seniors in particular have been at Paly long enough to be able to assess the changes that have influenced our school. Most upperclassmen also have their driver’s license — a pivotal step towards becoming a young adult.If a student is old enough to drive a car on the road, they’re old enough to drive the decisions that influence their daily lives. With a driver’s license, one’s management of his or her  life is heightened to a degree that wasn’t feasible before. This new liability allows the student to learn and mature drastically and become indisputably more independent. Once this independence is gained, it seems only appropriate that he or she is able to utilize it to have a say in their academic lives.

Teenagers are the ones experiencing the discrepancies within our schools, therefore it is the student body who should be the ones who try to advocate for change in respect to voting. Without student input, the school board elections are relying exclusively on adults to vote for the candidates they feel are most fitting for the position using their own biases and judgements. Occasionally, parents decide to abstain from voting, which can be frustrating for their children.

According to junior Site Council representative Ben Gordon, he had to convince his parents to vote on his behalf after they told him they were not planning on voting at all.

Some may feel that it is inappropriate to have minors make decisions that affect the entire community because teenagers are commonly known to have impulsive and underdeveloped thought processes.

While this may be somewhat true, the future will ultimately be controlled and transformed by the younger generation. Learning how to handle adult situations and make educated decisions allows high schoolers to feel empowered and motivated to advocate for change and improvements within  society.

Allowing students to elect the representatives that are in control of our community will instill responsibility and ignite social change into the minds of young adults.

Increasing student activism and participation in the community will lead to endless improvements and allow for student’s voices to be heard and appreciated, further developing Palo Alto’s society and overall content in our school district.