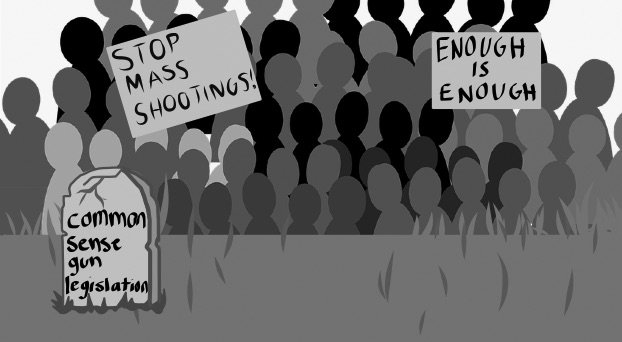 American news outlets were flooded with the devastating details of the shooting at Marjory Stoneman Douglas High School in Parkland, Fla. on Feb. 14, 2017. Videos of bullets flying into classrooms and high school yearbook pictures of the lost students consumed American media.

Immediately following this tragedy, Americans began their routine mourning procedure. The president offered condolences, some politicians promised to enact new policies and protestors took to the streets, enraged and desperate for change.

In the 37-day period after Parkland, 73 more teenagers lost their lives to gun violence, according the the Gun Violence Archive. Sometimes, their pictures made it into the 24-hour news stream. However, too often, the names of these victims were swept under the rug, limited to a single published police report.

Although gun violence is primarily associated  with school shootings,  other forms of gun violence account for the vast majority of shootings in the U.S.

The media and those concerned with the future of gun policies must understand the full scope of gun violence in our country.

Mass shootings are nothing less than tragic and, undeniably, uniquely American.

Between 1966 and 2012, there were 90 mass shootings in the U.S. The next four countries with the most mass shootings had 54 combined. Because of these high numbers, this type of tragedy seems to have become the symbol for gun violence in the U.S. Although the topic of mass shootings fuels the gun control debate, these shootings make up a small percentage of annual gun deaths.

It is important to clarify that gun violence can be considered either criminal or not criminal and can include suicides and accidental deaths.

According to an article in The Washington Post, the debate on reducing mass shootings, which caused some 400 deaths last year, failed to include the 20,000 who kill themselves with guns every year.

Echoing a similar point, an article published by FiveThirtyEight, a website that focuses on opinion poll analysis, politics, economics and sports blogging, showed that two-thirds of gun deaths are suicides.

The U.S. has 4.3 percent of the world’s population, but suicide by gun in the U.S. represents 35.3 percent of all firearm suicides in the world in 2016.

In addition to leaving out victims of suicide, the conversation regarding gun law reform seems to ignore the fact that gun violence plagues many predominantly minority communities.

Debate over assault rifles and school safety dominates political conversation, yet many minority communities deal with gun violence on a daily basis.

According to FiveThirtyEight, almost one-third of gun deaths are homicides. Approximately two-thirds of young men killed in homicides are black.

To put things in perspective, most Americans are 128 times more likely to be killed by gun violence than in acts of international terrorism.

An African American person living in an urban area is almost 500 times more likely to be killed by gun violence than by terrorism.

It is no secret that the deaths of high school children appeal to media more than an influx of gun violence in cities that are largely populated by minorities. Many Americans are unaware, or seem to not care, about the everyday shootings that occur in large cities such as St. Louis, Baltimore and Detroit.

Gun violence has always affected predominantly minority communities. Yet, it seems that “enough is enough” only when guns find their way into affluent, white communities.

Change in gun policy is important, yet sometimes when only one part of the issue is stressed, these policies don’t reflect the larger needs of the nation.

When gun violence is simply viewed through the lens of mass shootings, assault weapons and school safety are the only topics mentioned.

Many of the movements stemming from mass shootings in white communities should still be supported.  However, within many of these movements, the full scope of the gun violence epidemic is being ignored.

To clarify, the issue of mass shootings should not be taken lightly.

As mentioned previously, America has the highest rate of mass shootings in any developed country. By no means are these violent acts unworthy of public and political attention.

In order to change this unfortunate and frequent misinterpretation, American voters and politicians must become more informed about the issue.

By being informed, the public can enact policies that will benefit the country as a whole, not just a small minority.

No specific act of gun violence should stand alone as the representative of the  gun violence epidemic in the United States, and the media should be held responsible for making sure of this.