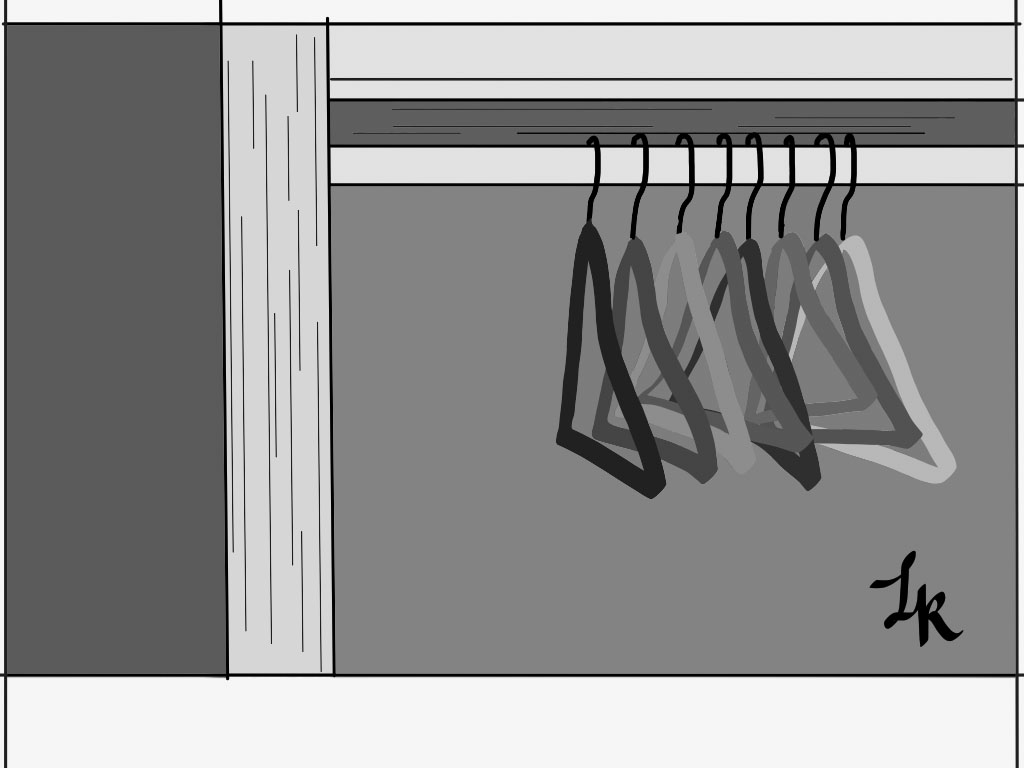 How having less can mean more

Senior Noor Navaid ransacks her closet, stuffing two trash bags full of clothing to be donated later. One of thousands upon thousands of millenials participating in the minimalist movement, Navaid practices minimalism primarily in her clothing and the organization and conservation of what she wears.

“Minimalism is a means of adding humility to not just my personality, but my outward appearance,” Navaid said.

Oftentimes, people seek material possessions for self-satisfaction — maybe they think purchasing a much-wanted pair of new shoes or the latest model of the iPhone will bring them happiness. A minimalist, in contrast, gives up most of their material possessions in order to enjoy the simple pleasures in life.

A modern-day minimalist lifestyle is unrestricted by any definitions or bounds — a minimalist lives according to their own interpretations of the concept.

At its core, minimalism is living with intentionality; it is simplifying life down to the bare essentials, instead focusing on nonmaterial aspects such as health, happiness and relationships. In minimalism, less truly is more.

Every possession owned should provide real value to one’s life, and everything that distracts from this authenticity is thrown out or donated. For some, this entails selling their car, moving into a smal house or sleeping on a cot on the floor.

For others, the change is not nearly as drastic. Either way, this decluttering can bring much-needed change in the physical space of one’s life, according to Navaid.

“I decided to become a minimalism because I used to own a lot of clothes that I never wore or only wore once, and it was really beginning to bother me. [Minimalism] really interested me because I’m all about looking presentable, but the realization that minimalism could also help me declutter my closet seemed really promising.”

Originally a design trend that arose in the 1950s characterized by whitewashed expanses and a small central focus, minimalism has now resurfaced as a growing lifestyle movement among millenials. While we may not realize it, minimalism seeps into our lives through our clothing, coffee shops and social media.

According to former Paly interior design teacher Theresa McDermott, minimalism appeals to today’s aesthetic because of the increasingly complex world we live in.

“Minimalism demands clean lines, simplicity and an emphasis on basic elemental materials,” McDermott said. “Our lives can easily be overwhelmed by too many belongings, too much information and technology-driven social networks and overcommitment to activities. In an attempt to simplify our lives, we are drawn towards the ideals of minimalism.”

Minimalism is not characterized by just a change in physical space, but by a change in mental and emotional states as well. In “The Minimalists,” Joshua Fields Millburn and Ryan Nicodemus, two men who spearheaded the movement, write “by clearing the clutter from life’s path, we can all make room for the most important aspects of life: health, relationships, passion, growth and contribution.”

This aspect of minimalism is not new; in fact, it has roots in ancient cultures across the world. The common thread between minimalism, Buddhism, Christianity and countless other religions involves letting go of material desires, which are a source of unhappiness and stress in one’s life. According to AP Psychology teacher Christopher Farina, the values embraced by minimalism will make us happier than material possessions would in the long run

“There is pretty good research to suggest that relationships and experiences tend to make us happier in the long term than things. If you look at the choice between buying a new phone and buying a vacation to spend time somewhere, particularly if that’s time that you’re spending with people, those tend to have a greater long term impact on people’s happiness than a physical objects.”

This connects to the psychological of the hedonic treadmill being taught in Paly freshman and sophomore advisories, which is the tendency of humans to quickly return to a state of neutral happiness despite major changes in life, both positive and negative.

In this context, it explains when someone buys a material object they want, it brings temporary happiness, but after a while this object becomes the old thing, with the person back to square one needing something new and exciting to replace it.

This creates a cycle of chasing after happiness to gain it for a moment, only to go back to the beginning, moving in place on a so-called “treadmill.”

According to Navaid, a minimalist lifestyle provides a way to break this cycle by emphasizing values and helping people focus on what they want and what is important, such as more fulfilling relationships and a more purposeful and productive day-to-day life.

It is easy to begin incorporating minimalism into your life, according to Fields and Nicodemus; simple steps such as removing one object or activity you do not need every day is an easy, gradual transition and a great way to start prioritizing what is truly important. The integration of minimalism is simple and yields benefits for the practitioner.

Though Navaid does not practice minimalism with the same intensity she did initially, she said she recognizes the rewards and benefits of living minimalistically.

“I definitely think that instilling [minimalism] in my life has led to me gaining some wonderful habits,” Navaid said. “For example, I give away clothes more often, and I try to utilize everything I currently have in my closet at least once a month so I’m not ‘wasting clothes’ per se.”

Fields and Nicodemus say that by giving up material possessions and instead prioritizing time for personal growth and providing the freedom to do so, minimalism holds the key to leading a meaningful life.

“I [felt] really helpful, like I had contributed in some way,” Navaid said. “It wasn’t a surety I had or anything, just a feeling of doing something constructive and useful.”