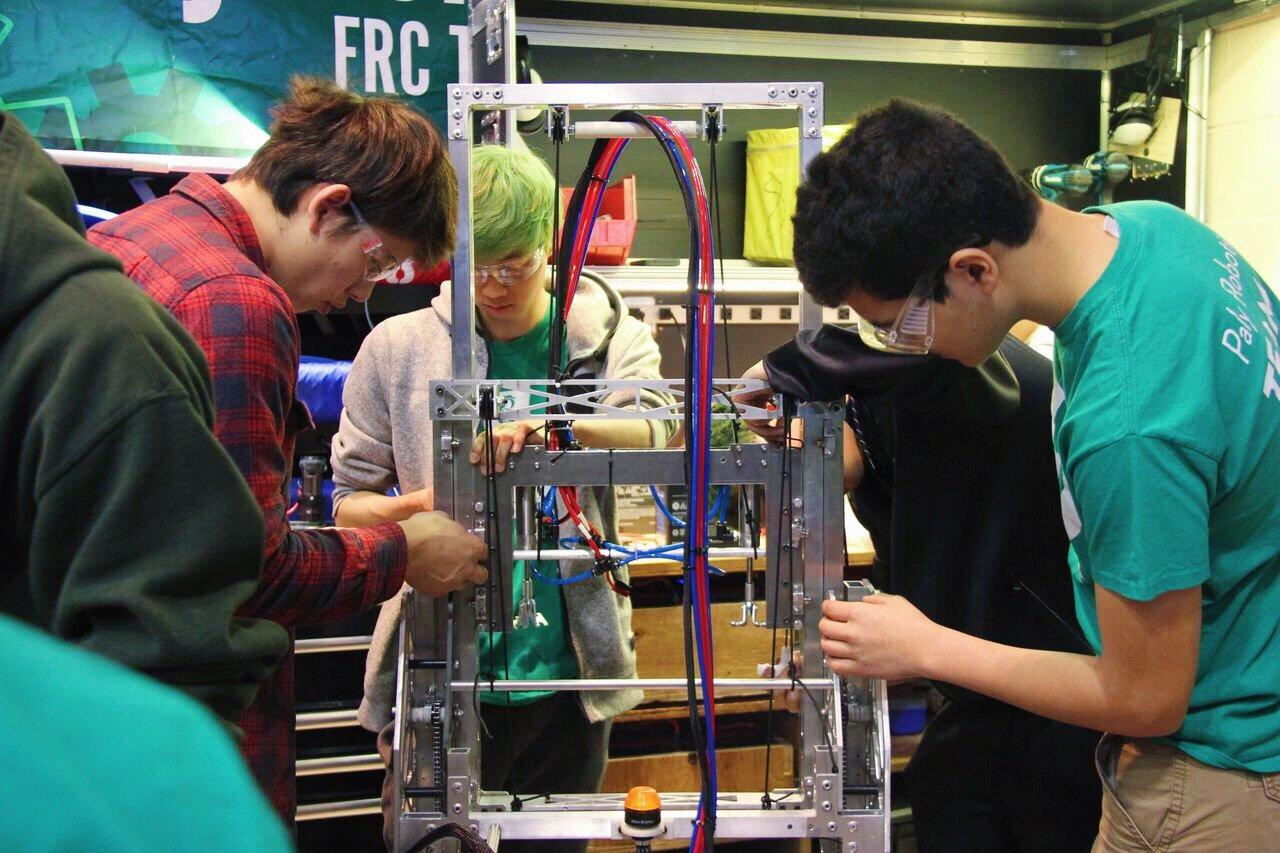 Processed with VSCO with hb2 preset

Before resigning, school officials said they need more “time and space” to investigate student and parent complaints against her and placed her on administrative leave. In addition, the robotics team was temporarily shut down based on a recommendation from Principal Adam Paulson.

Twenty-two robotics team members signed a general statement letter saying they feel threatened and verbally attacked by Krier, who was hired in August when previous robotics coach and computer science teacher Christopher Kuszmaul announced he was taking a leave to be with his family in Oregon.

In an interview with Palo Alto Online, PAUSD Superintendent Don Austin said Krier was placed on leave “to provide the time and space needed to thoroughly investigate concerns expressed by students and parents.”

Senior Bryan Yang, a co-captain of the robotics team, spoke in the public session at the board of education meeting on Oct. 9 and said he was unhappy with Krier’s job as a coach.

“Since the arrival of our new head coach following the departure of Mr. Kuszmaul, the team has fallen into a downward spiral,” Yang said.

Kuszmaul declined to be interviewed for this story.

Senior Jennifer Xu, another co-captain of the team, said Krier often intimidated students and violated district policy on some occasions.

“[She was] removing other students from the Java shop and locking the doors in on myself and Bryan Yang before promptly yelling at us and threatening to cut Bryan from the team,” Xu said. “This was a clear example of intimidation towards us, and by locking the doors, she prevented eyewitnesses, but also violated the PAUSD Professional Standards for its staff.”

Krier did not respond to an email request for an interview.

“She started to cry and began throwing around curse words—d— and f—. She insulted me directly by calling me a ‘snot nosed teen.’ I had never had any teacher directly insult me before, and I was shocked by the hostility behind her insults.”

According to Xu, the robotics team initially tried speaking directly to Krier to discuss issues they had with her leadership. Xu said these discussions led to no progress, so members of the team went to Paly administration about their issue.

“Each of us has been to the administrators probably about 15 times in the past few weeks,” Yang said.

The team set up a meeting with Paulson to discuss its concerns. However, Xu said this meeting was canceled by Paulson because Assistant Principal Tom Keating observed the robotics team after getting the students’ complaints and concluded that the situation was fine.

Before Krier was put on leave, in an email statement, Paulson said Keating was working with her and the robotics team to address their concerns.

“I feel strongly in the support our [administration] team is extending to Paly Robotics,” Paulson said in his statement. “Dr. Keating is highly involved with the team, attending meetings and recent meets. He will continue to be accessible for supervision on an ongoing basis. This is Ms. Krier’s first year at Paly, and I believe she should be given an opportunity to lead the robotics team.”

In addition, students wanted to bring their parents into the initial meeting with Paulson since some students said they did not feel comfortable speaking to administration alone, but Keating wouldn’t allow this and ended up shutting down the meeting.

“This meeting is expressly for the admins to hear student concerns about the robotics program,” Keating said in an email to the team. “Including parents would complicate the conversation. After the meeting with students, Adam [Paulson] and I will determine next steps.”

Xu filed a Uniform Complaint Procedure (UCP) with the District alleging discrimination and harassment by Krier. The UCP alleged incidences of Krier locking minors in rooms, swearing at team members and yelling at students.

Because they weren’t getting anywhere with their complaints, on Oct. 11, former team captain Devin Ardeshna filed a third-party complaint with Megan Farrell, the District’s contact on non-discrimination issues, alleging that Krier has selected students specifically to diversify the team, putting some other ethnicities at a disadvantage for team membership.

In an email Ardeshna said, “The goal of such a complaint is to open up a dialogue between the PAUSD Compliance Office and the students stuck in this situation.”

Saying they thought Paly administrators weren’t addressing their concerns, the team eventually resorted to speaking during the open forum section of the school board meeting.

“The hope was that making this more public to the general community as well as the school board members and superintendent who are technically above in the chain of command to the administrators would have some sort of positive impact on our dealings with the admin,” Yang said.

“We needed to implement new rules and expectations to create a safer environment for our students working in the robotics lab,” Paulson said. “Ultimately, some of the changes we are requiring are being met with resistance.”

The lab has been shut down until an inspection happened on Oct. 17, the day The Campanile went to press.

“The safety inspection by Keenan and Associates should help consolidate any mixed information between the two groups,” Yang said. “We understand that there are always improvements that can be made, and we’re always willing to work with them on that.”

Xu said she knows this situation is particularly messy because the administration hasn’t been involved with the team before Krier was hired.

“The administration hasn’t had many dealings with Paly Robotics directly until this year,” Xu said. “They’re completely new to how our system works or how it functions. They made a lot of alleged claims such as, ‘Oh, this is very unsafe or not organized,’ without fully understanding what the program was about.”

“We do certifications for machines, we do have a fully set out structure for our team,” Xu said. “But no one really understood that, so it was very easy to paint a picture of chaos.”

At the end of the day, according to Merrilee Soohoo, a parent of one of the team members, the team’s biggest concern is the mental well-being of its members.

“The students do not feel emotionally safe in the robotics lab this year. In the three years I’ve been volunteering, I’ve come to know that the robotics lab functions not only as a classroom but as a comfortable living space, a friendly, welcoming open place where the robotics team members can go to find literal and figurative shelter, like a home, an oasis.  So, the question now is, is student wellness and emotional health a true focus of Palo Alto Unified School District?”

“A number of the kids on the team are my friends,” Ardeshna said. “I’m really concerned about their well-being, and the stress that this situation is causing. Many are seniors, with their early college applications due in a few weeks. Or juniors, studying for the SAT/ACT next month. It was frustrating to see the lack of response from the Paly administration—I wanted to see action taken to address the student concerns.”

In addition, Soohoo said many team members don’t feel comfortable confronting Krier about their problems with her leadership because they are enrolled in classes taught by her. Academic achievement is important to many of these students, so they fear Krier could lower their grade if they come forward or complain to her. This causes an environment of fear and intimidation in what she said used to be a warm and welcoming program.

Xu said she and Yang do have a proposed solution to the issue that they hope administrators will accept.

“In the end, our goal is to kind of have [Krier] decoupled from the Paly Robotics program,” Xu said. “Obviously, we don’t want anything bad to happen to her, that’s not our goal. We just want her to stop interacting with students in a negative manner in the context of robotics because it’s just not healthy for our members. Our goal is to hopefully have a replacement with two of our mentors, one of which is an industry mentor, and the other of which is a PAUSD certified teacher.