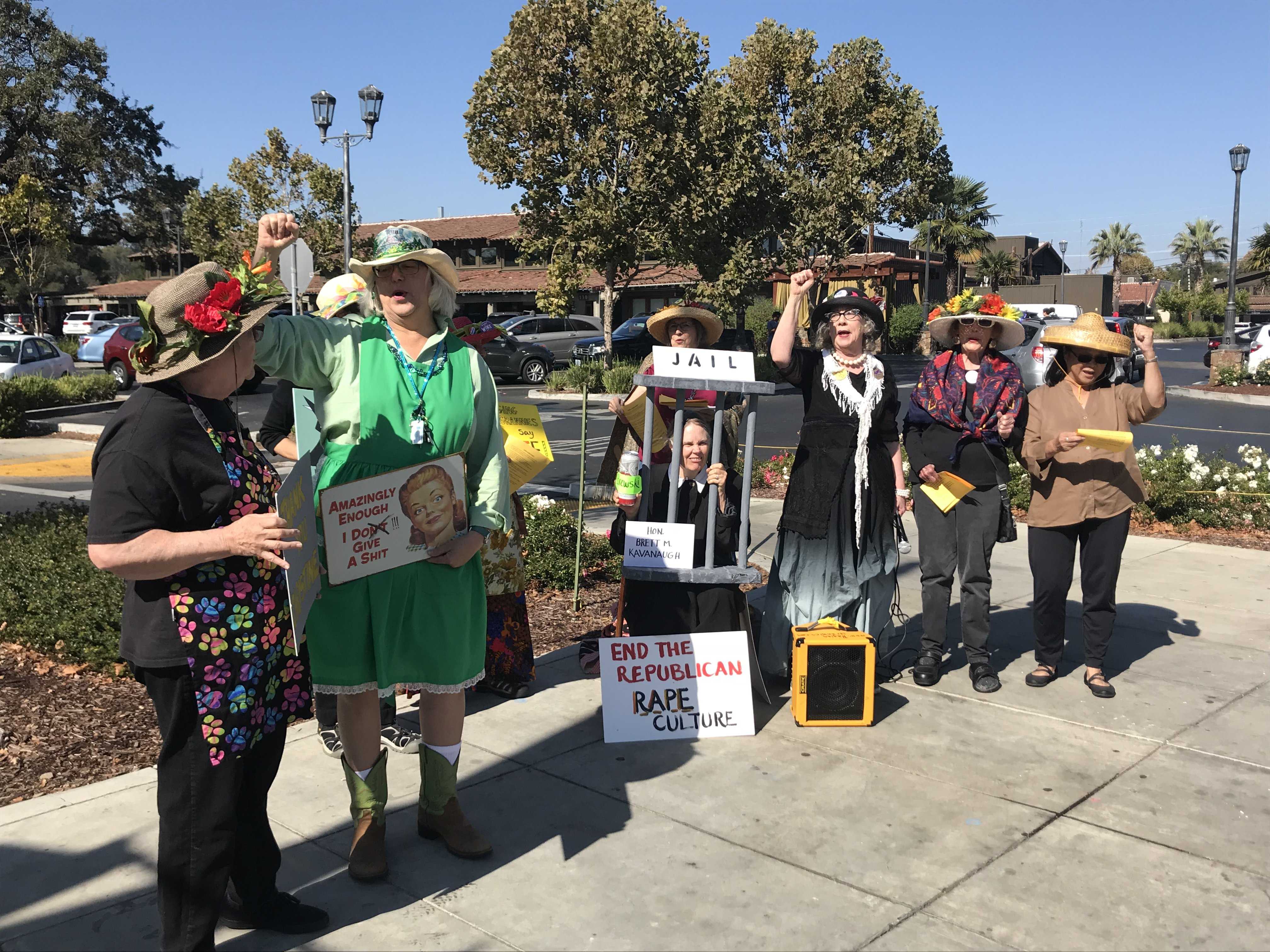 The “Raging Grannies,” an activist group predominantly comprised of senior citizen women, flooded the parking lot area around Trader Joe’s in Town & Country Village on Oct. 17, advocating for high schoolers to vote in the upcoming elections.

“Our main goal is to get 18 year olds to register for the voting, and to get the 16 and 17 year olds to pre-register. We think it’s important that everyone votes, no matter what political side they’re on.”

Although the group was founded in 1987 in British Columbia, it eventually spread to the Bay Area in 2001. Using props, songs and humor in their protests, they have been standing up for their morals in untraditional ways.

In their most recent protest, the group protested against Brett Kavanaugh, a Supreme Court Justice who was recently accused of sexual assault.

“Liar! Liar! Pants on fire!” was one of the many chants they performed, arguing against Kavanaugh. The group brought props and costumes as well.

One of the group members dressed up as Kavanaugh inside of a jail cell.

In the past, the group protested against issues concerning gun violence, sexual assault, immigration policies and voting responsibility.

Most recently, they gathered to encourage teenagers to participate in voting. The intersection at Embarcadero Road and El Camino Real was filled with songs, cheers and posters during the students’ lunch break.

The elections on Nov. 6 will change government in both federal and local levels.

Currently, all 435 seats in the House of Representatives are up for grab, and 35 seats in congress are empty. Meanwhile, six Palo Alto citizens are running for two spots in the school board. According to group member Anne Davidson, an individual’s vote is losing value.

“It’s always been important that everyone votes. Things are changing these days, and a person’s vote does not mean as much. For example, gerrymandering in certain states takes people’s voting powers away.”

According to Davidson, voting can lead our nation to make necessary changes and reforms.

“We’re in a real crisis right now in all areas,” Davidson said. “We’ve hit a crisis-point in the me-too movement, climate change, gun-control and immigration.”

According to Ann, students do not have to be over 18 years old to have an impact on the election.

“I think that it’s time for people to stand up because the country is in danger if we don’t. What we need is to get eligible kids to register and pre-register. Even for kids under 16 years old,  they are still the leaders of the next generation, so they must take a stand.”