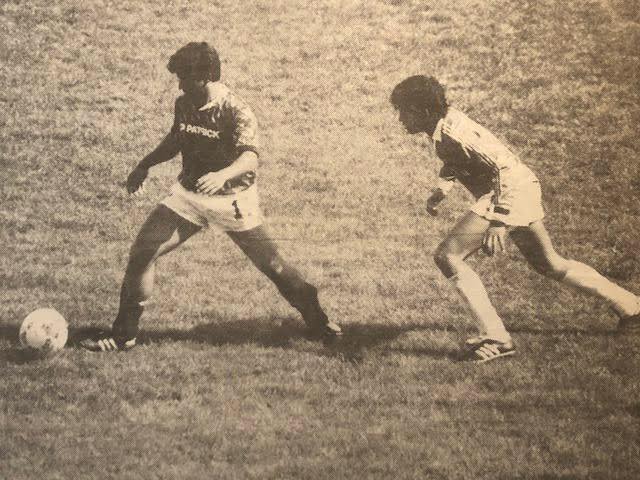 With minutes left on the clock, Beto Luna encourages his team, the Blizzards.

“Come on guys!” he yells, cheering his team on from the sidelines as it makes a final push into the attacking third of the field.

Stanford Soccer Club coach Alberto “Beto” Luna is no newbie when it comes to soccer, especially in the Bay Area; he has played professional soccer on five teams, including the San Jose Earthquakes, and has been coaching the sport for over 20 years.

Luna was a student at Foothill College when he was first recruited for the San Diego Sockers, an indoor soccer team considered one of the best in the nation. But he only played for the Sockers for half a season as he was married and had a son.

“I could say I’m probably the first person, or one of the first people, that started bringing the Latinos [into Palo Alto club teams].”

“The pay for pros in those days was not much. Players with families like me had to have another income,” Luna said. “I came back and played for a team in San Francisco that was paying $200 per game.”

Whilst on that team, Luna played against a team in San Mateo and won. The arena was run by the assistant coach of the San Jose Earthquakes.

“He told me he liked my style of play, my quickness and how aggressive I was and still kept it a clean game,” Luna said.

Luna said he was then invited to play for the Earthquakes the following season without trying out, and he accepted.

After he played for the Earthquakes, Luna coached in Milwaukee before returning to California to finish his professional career with the Chico Rooks, which is no longer a team. However, Luna didn’t get a real start in his Palo Alto coaching career until he was contacted by a mother looking for a soccer coach for her kid.

Luna, who is Latino, coached his oldest son in American Youth Soccer Organization (AYSO). A few years later, he got a call from one of the moms from his son’s team, who asked Luna to coach her son’s team in Palo Alto.

“When I came to Palo Alto, there were not that many Latino kids playing,” Luna said, explaining how other Latino kids thought they wouldn’t be able to afford the Palo Alto Soccer Club (PASC), where he was coaching at the time. However, Luna said he showed them they were eligible for scholarships and started encouraging more Latino kids to join.

“I could say I’m probably the first person, or one of the first people, that started bringing the Latinos [into Palo Alto club teams],” Luna said.

According to Luna, some of the Latino kids have told him that being on a soccer team encouraged them to stay in school and stay away from gangs and drugs. They also tell him that if it wasn’t for him, they might have been in jail or even dead.

“When you hear a full grown man say those things with tears in their eyes, it’s an awesome feeling you can’t explain,” Luna said. “It makes you keep trying to help more kids.”

He said he likes to think his bringing these players into PASC brought it up from a class three club to a more competitive class one club.

Luna’s first team went on a tour of Europe, playing tournaments in Denmark, Norway and England. He said the trip was a good experience for the team. His students started telling other athletes to join Luna’s team, and kids flocked in from all over the Bay Area, including Half Moon Bay, San Francisco, Hayward, Oakland, Newark, Fremont and South San Jose.

“I tell [kids] that if they stay in school, they have a very big chance of becoming pros.”

After 20 years, Luna switched from Palo Alto Soccer Club to the Stanford Soccer Club team, where he currently coaches 8 and 9-year-old girls and 14 and 15-year-old boys.

Luna’s youngest son, who is 15, was playing for the San Jose Earthquakes Academy, but has now moved to the Barcelona Academy in Arizona.

Luna’s own coaching style closely resembles the training he received when he was a professional, as he reuses some drills.

“When I started coaching soccer … I took everything that I liked from all the coaches that I had before,” Luna said. “I showed the kids the practices and the drills, all that stuff, but I kinda changed them a little. The ones that I didn’t like, I put them aside.”

As for his treatment of students, Luna likes to think of himself as fair.

“I treat the kids the same, I don’t have any favorites, [because] if you start doing that… you have problems in the team,” Luna said. “I joke around with everybody, but I treat them the same.”

Paly students who had Luna as a coach speak to his fun side, citing inside jokes within the team.

“[Luna] always talked about Oregon and a championship tournament that we had in Oregon,” senior Luc Pardehpoosh said. “All he really talked about was Oregon with us, so we had a joke in the team about Oregon. He’s kind of a meme in our team.”

Jokes aside, Paly students credit Luna for being a disciplined and encouraging coach.

“I thought he was a very helpful coach to me and the team,” senior Juan Aguila said. “He would always tell us to do better … We knew he was making us into better players.”

“He made us sprint a lot, but he was cool,” Pardehpoosh said.

“Beto was a very disciplined coach who liked things done a certain way,” senior Nathan Seto said. “We would train hard, but when we performed well, he would reward us. One day I would love to play soccer under him in Oregon.”

Luna is also very clear about separating the actions of parents with the actions of their player’s. He said if he had a bad relationship with a parent due to a disagreement in his teaching styles, he makes sure this doesn’t affect how he treats their child.

Additionally, Luna makes sure to move up the players who are above others in their level.

“[The Stanford Soccer club is] not like a lot of coaches or a lot of clubs in the area that don’t wanna let the kids go [because] supposedly our team will ‘get weak,’” Luna said. “We’re not here for us. We’re here for the kids; we’re here to develop them.”

His experience in the sport, he said, has helped him push young athletes to do their best.

“Don’t hold back. Don’t let anybody change your mind, think for yourself… keep going, don’t give up.”

Although Luna encourages his students to persevere athletically, he encourages working hard academically as well.

“I usually use myself as an example,” Luna said. “I tell [kids] that if they stay in school, they have a very big chance of becoming pros.”

He said the U.S. is the only country in the world that looks for college athletes to play professionally.

“School is very important, because if they don’t make it as a pro athlete, they will have a career to fall back to,” Luna said.

Luna’s advice for aspiring athletes is to just go for it, regardless of what anyone says. He said he’s seen jealousy between friends, coaches and even parents, which can hold players back in terms of their success as an athlete.

“If you wanna become a pro, it’s not easy; it’s not easy at all,” Luna said. “There’s gonna be so many challenges, but if you stick to it and you really think you can do it, just stay on it.”

As a final piece of advice, Luna recommends athletes should always play at their level and persevere.

Luna said, “Don’t hold back. Don’t let anybody change your mind, think for yourself … Keep going, don’t give up.”