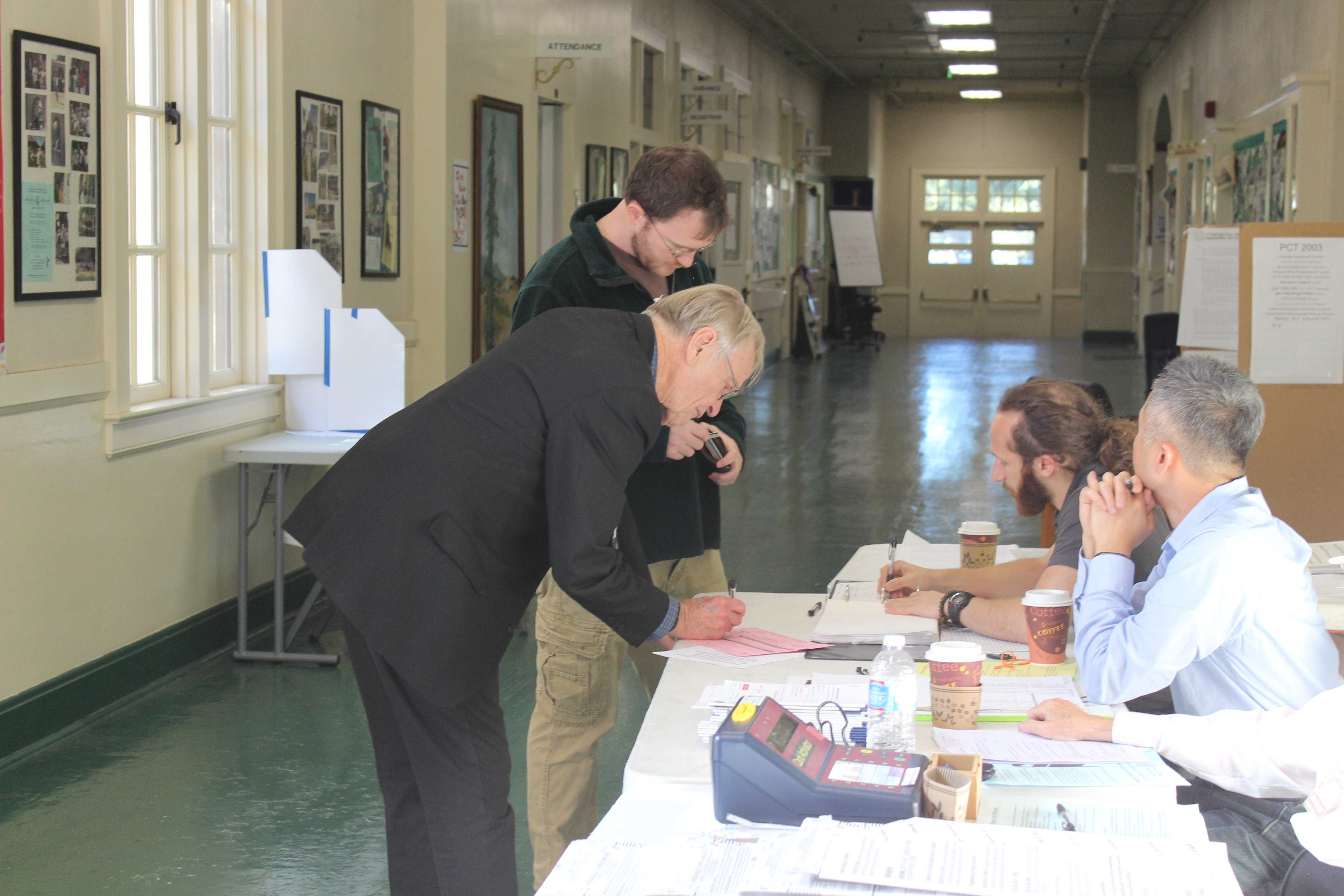 Senior Otto Berndt, who recently turned 18, was among the few Paly seniors who had the opportunity to cast their first votes in this week’s elections. Little did he know that preparing to vote would require so much effort. With college applications and schoolwork looming overhead, Berndt lacked the time to learn about the measures and candidates on the ballot.

“To understand more fully the implications of a lot of the propositions, it would have taken a lot more time to research and it was definitely hard to try to fit it in,” Berndt said. “It sort of came down to the last minute.”

Still, Berndt did his best in fulfilling this privilege of citizenship, and along with thousands of other Palo Altans, cast his vote for dozens of candidates and issues, including five local propositions: Measure A to renew a tax to fund general county purposes, Measure E to hike the  hotel tax to improve city services, Measure F involving health care, Measure Y to limit school board members to two terms and Measure Z to issue up to $460 million in bonds to upgrade schools. Additionally, voters had a say in selecting state officials, city council members and school board members.

According to the Santa Clara County Registrar of Voters, only about 53 percent of ballots had been counted as of The Campanile’s press time on Wednesday night because of the large number of mail-in ballots. With more than 200,000 ballots countywide still being factored into voting, results for Palo Alto’s school board race may not be released for a few weeks, according to a Palo Alto Online article.

According to the results for the Palo Alto Unified School District board election as of Wednesday evening, incumbent Ken Dauber and candidate Shounak Dharap were leading. While Dauber’s six percentage point lead over Dharap almost guaranteed him a spot on the school board, the second seat was up for grabs. As of Wednesday evening, only 25 ballots separated Dharap from third-place finisher Stacey Ashlund. Kathy Jordan was in fourth position, followed by Alex Scharf and Christopher Boyd.

“I’m pleased to have won, which I think is just a sign of the voter confidence by the community and the leadership that I’ve provided and the School Board has provided on behalf of students and the district. You know, there’s still a second seat to be filled, and I think that will give us a better understanding about what direction voters are looking for.”

In total, only 306,086 of 885,764 registered voters in Santa Clara County cast ballots, according to the registrar, meaning countywide a voter turnout of 35 percent, not counting the mail-in ballots that may not even have arrived at the Registrar yet. Adding to the uncertainty for Santa Clara County, a school board election must hold a recount if the difference in votes is 25 ballots or less, according to a Palo Alto Online article.

“There’s still a lot of votes that haven’t yet been counted, so I think we really have to wait to see how many votes were dropped off at precincts and how many votes are coming by mail before we can really get accurate turnout numbers,” Dauber said.

In his upcoming term, Dauber plans to focus on a few urgent issues that directly affect students.

“My top priorities are continuing to make progress on student wellbeing, in particular homework, test and project stacking, improving special education services, raising achievement for underrepresented students and continuing to improve the fiscal operational management of the district,” Dauber said.

A common theme in goals among School Board candidates is better control of management and operations.

“I’d have to say that there are two priorities. The first is hiring a general counsel so that we can continue down a path towards compliance and towards proper management. My second thing is really making sure that we are addressing equity and innovation in the District.”

This election process has brought up various issues, which Dharap hopes will continue to be discussed.

“We’ve had such diverse candidates who have brought really unique perspectives…. There have been a lot of issues that have galvanized the community during this election,” Dharap said. “The election has been a really lively time, a time that we’ve really been able to engage in the kind of discourse around issues that we should be engaging in when it’s not even election season at all.”

While this election has united some candidates, it has caused    divisions between others. Current Board member Todd Collins lent $2,668 to a parent-run committee against candidate Jordan, according to an Independent Expenditure Report.

“I faced unfounded and unrelenting personal attacks intended to distract from the fact that change is needed on the school board,” Jordan wrote in an email, responding to questions from The Campanile.

Overall, Jordan believes that her message was heard by community members.

“I think [the race] was an intense experience, but our message that change is needed on the school board came through clearly and has resonated,” Jordan said. “I’m not surprised that it is close. I hope it will get even more close.”

In the Palo Alto City Council race, first-time candidate Alison Cormack came in first by a large margin and beat all three incumbents, knocking Cory Wolbach off the council.

“I was thrilled with the results, and I actually wasn’t surprised, and the reason is that I have been walking and knocking in neighborhoods all over the city since July,” Cormack said. “That’s really the closest there is to polling, and over the past month I felt the momentum building and enthusiasm, so I was just thrilled to receive so many votes of confidence.”

Cormack plans to zero in on important fixes throughout Palo Alto, as well as on budget issues,  during her upcoming term.

“We need to rebuild a number of the things here in the city that we rely on to make it work, and then I’m really hoping that we rebuild Cubberley [Community Center],” Cormack said. “In addition to that, it’s time for us to look carefully at how the city receives its money and how we spend it. A deeper dive into the budget both on the operating budget and on the infrastructure budget will be at the top of my list as I know it will be for my future colleagues.”

As for the low amount of voters in Santa Clara County, Cormack believes there are easy solutions for the future to increase voting such as making it clear to the general public that they have a right to two hours of paid leave to visit a polling station on election day.

“I was hoping for higher turnout,” Cormack said. “[Voting] needs to be a habit for everyone, it’s part of being a citizen in this country.”

For this particular election, many hoped that the 18-25-year-old age bracket would make a large presence and represent youth beliefs. Although Paly seniors are currently consumed with work, several student voters stepped up to the task.

“I didn’t get to put in as much effort as I wanted to because of college apps… so I didn’t have much time to go over the issues, but I still felt like I made an impact,” senior Kevin Cox said.

Some student voters felt as though the ballot was extremely confusing, especially for new voters.

Many students agreed, feeling disappointed by the descriptions provided for each proposition.

“I was extremely underwhelmed by the capability of our politicians to formulate comprehensive reviews of our measures and propositions,” Berndt said. “I felt a lack of intention in the wording and much of it felt as though our politicians are kind of not doing their job.”

Although he was unable to visit the polls on Tuesday, Berndt requested an absentee ballot and dropped it off. However, he felt as if he still did not have enough time to completely read about each measure. Absentee ballots are issued to military voters, overseas voters, or simply voters who cannot be present on election day so that they can fill them out on their own time.

“I hope that [students] think back on this experience and realize how exciting it is to be a citizen in our democracy,” Sano said. “I was really happy that a student from last year… came to… tell me that… because of the project last year, he was following [the election] this year.”

“I had my ballot shipped to my home address, and I was able to fill it out in my own time, doing research as I went through each proposition and candidate and race,” Amsbaugh said. “I wanted to vote because I didn’t want to squander the opportunity that so many people struggle to get.”