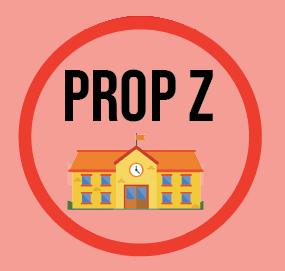 The city voted to pass Measure Z, a bond measure that would authorize $460 million of capital expenditures from taxes throughout Palo Alto Unified School District (PAUSD) for various construction and infrastructure improvements and renovations on Wednesday, Nov. 6. Going forward, PAUSD will improve the Tower Building and the Haymarket Theater and renovate the Student Center and the quad.

In June, the PAUSD School Board voted unanimously to put Measure Z on the ballot. David Shen, the campaign co-chair of Measure Z, is one member of the campaign team recruited to work on the project in May.

“Even before school started, we needed to hit the ground running, which is what happened. We’ve been going full speed and we’re accelerating all the way up until Tuesday, which is Election Day.”

The plans projected in 2008 are not complete, but the SS Bond is almost depleted in terms of money, which is why Measure Z is on the ballot this year, according to Shen.

Current students, who are reaping the benefits of the 2008 SSB measure, agree that the architectural improvements has positively impacted their campus  experience.

“When I go into my English class, we don’t have windows. It feels really dark and I feel like I have no energy in there. In new buildings, like the 800 (math and social sciences building), there are big, glass windows with a lot of natural light which I think improves the learning experience.”

Tsoi is one of many students who has the majority of their classes in a new building. Beyond academics, the new construction has benefitted the student community in extracurriculars too.

“When the PAC came along, it was so advanced,” senior Annie Tsui said. “For theater, it was really nice to have these resources and to be able to expand on the type of shows we can create because of it. It gives students a lots of experience if students want to work in professional theatres, especially to stage tech students who get to handle a lot of aspects of professional theatres that most high school students wouldn’t get to.”

Conversely, some students believe that although the facilities may affect one’s learning experience, the staff and curriculum are the main catalyst of a positive high school experience.

“To some extent these buildings have benefitted my learning, but Palo Alto High School, compared to some other schools in the area and across the country, is so nice,” junior Alexandra Lee said. “People I bring think that it looks like a university, but I think that [my positive learning experience] has more to do with the teachers and the education we’re getting than the actual buildings we’re being taught in.”

When public schools want to modernize or fix their architecture, the main way to do so is through bonds.

“The way California is set up, funding comes a lot from the taxpayers, the communities really have to work together to build up public schools so that not only current students benefit, but also future students,” Shen said.

Many of the PAUSD elementary schools’ multipurpose rooms were built in the 1950s and have not been seismically upgraded, according to Shen. Some of these buildings don’t have air conditioning or are not big enough for the number of students enrolled.

“[Those against the ballot may] have students who are almost out of the District and they don’t want to pay anymore; that’s very disappointing to see,” Shen said. “If families and parents had thought the same thing way back in 2008, and didn’t approve this bond, where would [today’s] kids be? They would be sitting in shabby buildings at Paly, not enjoying the new PAC and athletics facilities, and that’s unfair. We need to band together as a community not only to support present generations but future generations of Palo Alto.”