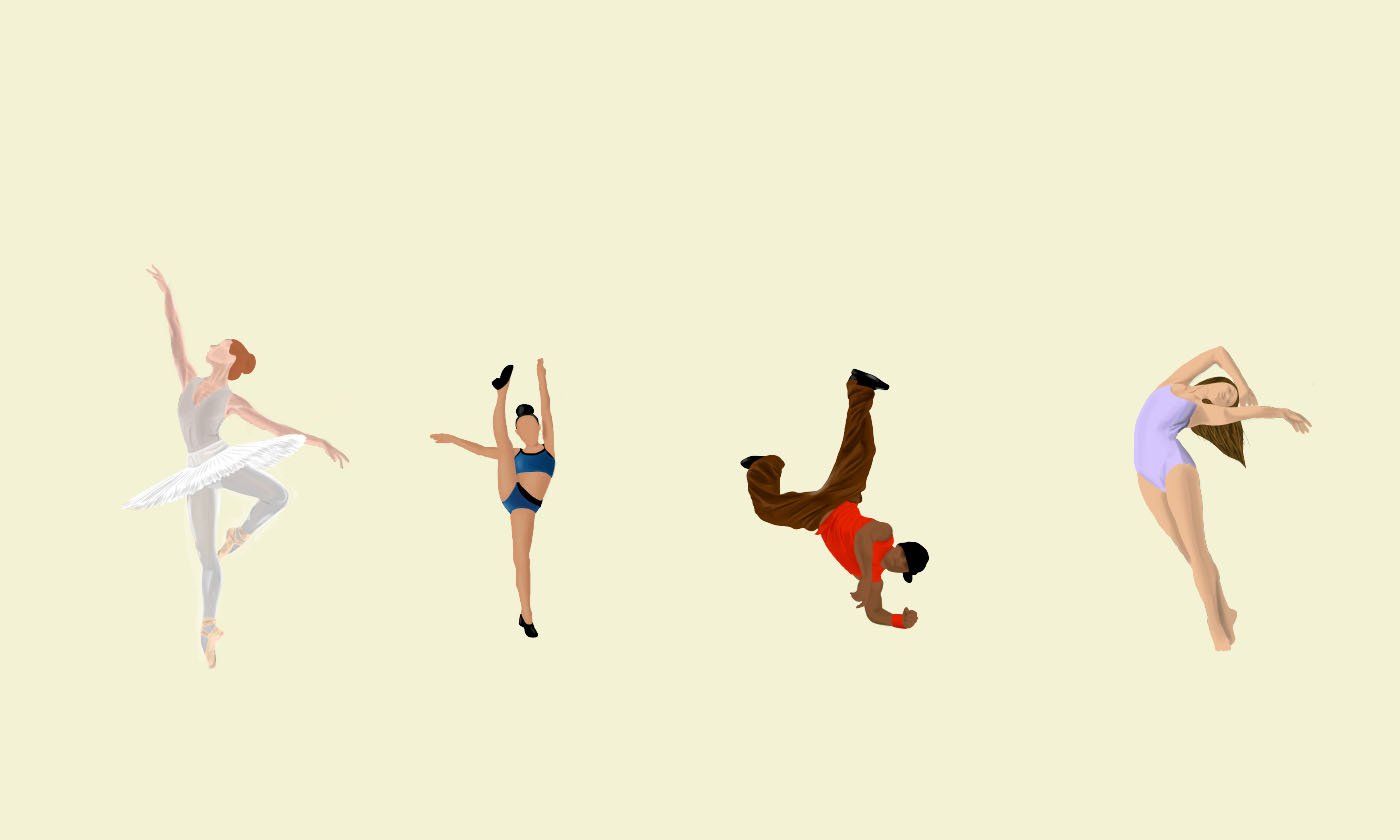 Diving into the Diversity of Dance

There’s a certain magic in the way a body, usually accompanied by music, is able to express a story and evoke awe and fascination from viewers. Although requiring the same physical prowess and exertion as other sports, dance offers a freedom and creativity that makes it widely regarded as more of an art form, rather than a simple competitive game.

One of the most unique and appealing aspects of this particular sport is its vast diversity. From the grace and control of ballet, to the lively street style of hip hop, there is undoubtedly a style of dance for everyone.

Globally influential and widely considered to be a fundamental base for several other dance genres, ballet’s substantial history has allowed it to remain one of the most popular and recognizable dances in the world.

It’s unsurprising that many dancers begin with ballet before expanding to other genres, as it helps introduce and develop elementary skills displayed in a variety of dances.

“I believe ballet is the foundation for other types of dance,” senior Natalie Ho, who is currently a part of the Menlo Park Academy of Dance, said. “It teaches you basic technique and bodily alignment, which translates to other genres.”

Characterized by theatrical yet graceful movements, ballet is usually accompanied by classical music. According to junior Alina Taratorin, a member of the Bayer Ballet Academy, it requires intense technical accuracy and control, despite its effortless presentation.

“When it comes to ballet, there’s a strict discipline that has to be maintained,” Taratorin said. “That’s not to say there’s no freedom of expression … there’s a lot of room for artistry but strict rules when it comes to technique and choreo.”

While many people typically only associate ballet with classical ballet, other methods have since stemmed from this traditional style to create distinct subgenres. For example, neoclassical ballet is less rigid and more asymmetrical, offering complex spacing. Similarly, contemporary ballet retains the technique and pointe work from classical ballet, but is also influenced by modern dance, which is shown by its inclusion of floor work and in-turn of the legs.

Although its intricacy and precision may seem intimidating, several find that the challenge simply makes them more attracted to it. Junior Taylor Yamashita, who is currently in her fourth year at Dance Connection Palo Alto but has been dancing since she was three, considers ballet to be her favorite style of dance, and well worth the rigor.

“It’s taught me how to work hard and persevere,” Yamashita said. “I’m not a natural ballerina body-wise, but somehow I’ve managed to stick with it anyways.”

Given the high degree of athleticism and dedication needed to execute such a refined artform, it is impossible to not admire of the strength, elegance and agility of ballerinas.

Although jazz dancing is a uniquely American product that developed in New Orleans, the style showcases mixed roots from ballet, tap and African traditions. Initially referring to simply any improvisation to jazz music, it has since evolved into a more choreographed, technical style of dance, all while maintaining its animated nature.

The Paly Dance Team incorporates a variety of genres into their routines and practices, but jazz has been particularly focused on. According to senior Iris Hart, co-captain of the Paly Dance Team, while jazz dance does have some noticeable ballet influences, it offers a much more buoyant and fast-paced style.

“[Jazz] is a little more upbeat and has a bit more creative movement involved,” Hart said. “You can add a bit more of your style while still being sharp and staying with the team.”

Other key characteristics include isolations, when the dancer isolates a specific body part, and improvisations.

“My favorite style is jazz by far,” senior Abby Cummings, co-captain of the Paly Dance Team, said. “I absolutely love the fast-paced nature of jazz and the performance aspect of it.”

Most of the music, moves and costumes are flashy and intense, so being able to perform to such upbeat routines requires great technical prowess and accuracy, according to Cummings. Dancers have to manage to appear energetic and free while still executing numerous exact movements.

“Jazz is extremely technical and requires clean lines and sharp movements unlike contemporary, lyrical, or ballet, which are more focused on fluidity,” Cummings said.

Strong technique is especially crucial for the jumps and turns that are commonly used throughout jazz routines. Subsequently, a sufficient ballet background is greatly encouraged to assist with grace and balance.

A combination of the rhythmic swing from African influences with the technical elegance of European dance allows for a uniquely creative and exciting style of dance that is continuously evolving and expanding.

One of the most culturally rooted styles, hip hop dance has been ingrained in African American society since the 70s, shaping the way many people talked, dressed and acted until it eventually became a lifestyle.

Hip hop first appeared in the form of deejaying, in which a disc jockey (or DJ) would use turntables to play catchy music usually centered around a breakbeat to maintain the crowd’s energy. Eventually, breaking — or breakdancing — was born as breakdancers, known as b-boys or b-girls, would perform athletic street dances and “battle” each other.

Since then, a variety of unique dance styles have developed from hip hop, including locking, which uses a series of quick movements that are individually “locked” for a few seconds, and  popping, fast contractions and relaxations of the muscles to create jerks or “pops.” Its freestyle nature and dance battles significantly differentiate hip hop from other styles. However, its extreme improvisation does not lower the level technique or skill.

“When we do those moves, we typically focus on whatever is in the background of the music, because if you listen closely, you can usually discover patterns in the music and predict what is coming,” Ben Tsai, a junior on Paly’s K-pop Dance Club, said. “Those moments when you see dancers do something dope to a beat that no one expects, they actually counted in the back of their mind to figure out when that beat is coming.”

“For hip hop as a genre, we usually dance to R&B, all the different types of rap songs, traps, EDM, funk and sometimes remixes of pop songs, quite a big range really — just shows how versatile hip hop dance,” Tsai said.

Hip hop’s freedom and casual approach is an enticing mix for several dancers, who prefer a less disciplined style as opposed to more technical dances such as ballet.

“It’s different aspects of artwork,” sophomore Alice Wang, a member of Dance Connection, said. “It’s like a calligraphy painting versus a sketch; they’re equally beautiful in their own ways, but I would relate hip hop to more a pencil drawing where you can do it spontaneously and takes a lot of effort to do but is also a more convenient way of expressing yourself.”

Hip hop’s less restrictive but still passionate form of dance has become increasingly popular throughout the world, and has even become prominent in foreign music, such as K-pop, and mainstream music.

A relatively recent genre, lyrical dance blends elements from ballet and jazz to create a style that focuses on expressing the lyrics or emotion behind the music to which it is performed to.

An extensive assortment of music can accompany lyrical dances, from rock to pop to blues, though it is usually very powerful or expressive. Lyrical dancing typically takes on a poetic and emotional tone.

“Lyrical dance is flowy and allows for a lot of creative movements,” Hart said. “There are stories that go along with most lyrical dances, especially for competitions. This way, dancers have similar emotions and moments to match the theme.”

Less concentrated on precision, it prioritizes effective expression usually achieved through dynamic and unpredictable moves. Although generally elegant and intricate, lyrical dancing can sometimes use more pedestrian techniques rather than showier ones to create an organic feeling.

“I chose [to perform] lyrical and modern dance because personally, it gives me more freedom to express myself individually, whereas I sometimes find [another style of dance] requires exactitudes,” Ho said.

Lyrical dancing is unique in that its main goal is to connect with audiences through illustration of song lyrics, and as a result, is able to consistently create emotionally impactful and memorable routines.