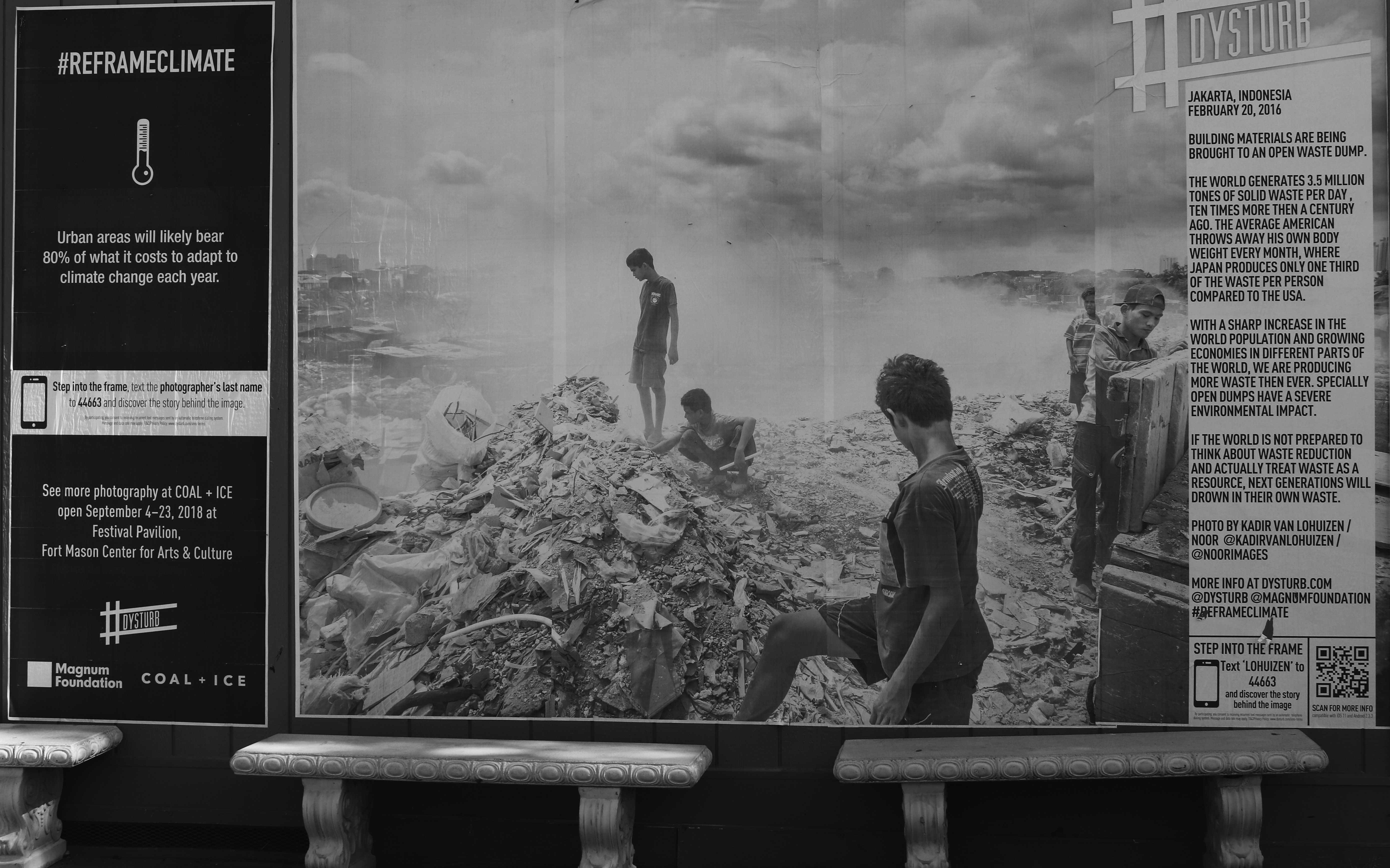 Every second, around 2.4 million pounds of carbon dioxide are released into the atmosphere, and a majority of it comes from humans, according to CBS News. While this is a problem globally, Palo Alto community members have taken it upon themselves to start bringing change to this ongoing problem.

One way Paly has spread awareness about climate change in the community is by hanging up an eye-catching mural on the quad, focusing primarily on the global effects of waste and garbage on the atmosphere.

This installation was created by Dysturb, a company that utilizes photojournalism to educate the public by using one of the most basic platforms of social networking, the streets. By creating striking and impactful visuals, the company draws attention to critical issues such as climate change.

The mural at Paly displays a sizable photo of children looking through one of the largest garbage dumps in Jakarta, Indonesia, along with a short description of how waste releases methane, a harmful greenhouse that contributes to global warming.

“The mural we installed [at Paly] is part of a global campaign named #REFRAMECLIMATE, which challenges the stereotypical notions of what climate change looks like in order to expand and deepen perceptions about its many implications. Our goal is to spark a dialogue upon important and too often under-reported issues.”

Climate change, one of the many causes for which Dysturb has created movements, is a prevalent issue with effects such as warmer temperatures and poor air quality. However, it is often interpreted incorrectly, according to Paly environmental science teacher Alicia Szebert.

“People may often confuse weather with climate, and people may also incorrectly assume that climate change means the planet will only get warmer,” Szebert said. “Climate change actually means that we will see changes that can lead to extremes— higher highs, and lower lows. This means that the normal conditions in which organisms evolved and ecosystems were created would be changed to a degree that organisms may not be able to adapt to in the time needed to adjust.”

There have been drastic changes in the amount of natural disasters occurring. On the East Coast, hurricanes are becoming more powerful and disastrous as the ocean temperatures rise. Wildfires in California are becoming increasingly common and destructive as land gets dryer,  according to Lori Meyers, environmentalist and teacher at South Peninsula Day School.

“Climate change is apparent in all of the storms we are seeing,” Meyers said. “Not necessarily in the frequency of the storms, but the power of the storms. The storm right now in North Carolina is huge; it’s bigger than the state of Florida. There is consensus among climate scientists that the size of these storms is directly affected by climate change.

In order to maintain a healthy environment, there are planetary boundaries that need to be sustained; however, humans have exceeded many of these limits and are continuing to harm the environment daily. Planetary boundaries regarding ocean acidification, ozone depletion, freshwater use and deforestation are being pushed past their safety limits. By exceeding these boundaries, there is an immense amount of pressure on the earth, leaving plants, animals and humankind in danger, according to the Stockholm Resilience Centre.

Humans have already considerably damaged the Earth. The acidity of the ocean has gone up by 30 percent since the industrial revolution according to NASA, the ozone layer is still recovering from a hole created by chlorofluorocarbons, humans are using more freshwater daily than the environment can replenish and deforestation has continued to put many species at risk of going extinct such as orangutans in palm forests, according to World Wildlife Foundation.

If humanity continues to underestimate how its actions affect the world, it is possible that the world will soon become an unsustainable environment for life, according to Meyers.

“I am a mom and as I started reading up on it, I learned that climate change is a big, exponential threat to the environment,” Meyers said. “I don’t think I could live with myself if I didn’t do everything I could do try and make it better so that my children and their kids will have a safe, clean, healthy place to live.”

Many people, including Paly students, have taken it upon themselves to change simple things in their daily lives to help clean up and save the planet.

“It seems pretty minor, but not using plastic straws can actually do a lot. I know [the Californian government is] in the process of banning them in California because most of them end up in our oceans and environment, which hurt our ecosystems.”

This is only one of many simple measures communities can take to ensure people are not carelessly harming the environment.

Among other Bay Area cities, Palo Alto has become one of the major contributors to eliminating the spread of climate change, with its goal to have zero waste by 2020, according to Meyers.

“It is really cool that we live in a city that is so progressive with the environment, particularly because our federal government right now is pushing back on combating climate change,” Meyers said. “This means a lot of the efforts being made are based on the city level, and a lot of cities together can make a big difference.”

Nearby city San Francisco has also played a major role in leading the world in climate change reformation. Marches attracting around 30,000 people, according to the Mercury News, and climate change summits have recently been held in San Francisco, creating a positive impact among society.

According to Meyers, discussions and marches like these are necessary to environmentalists in order to educate the public and fight to reduce and mitigate the effects humanity has on the planet.