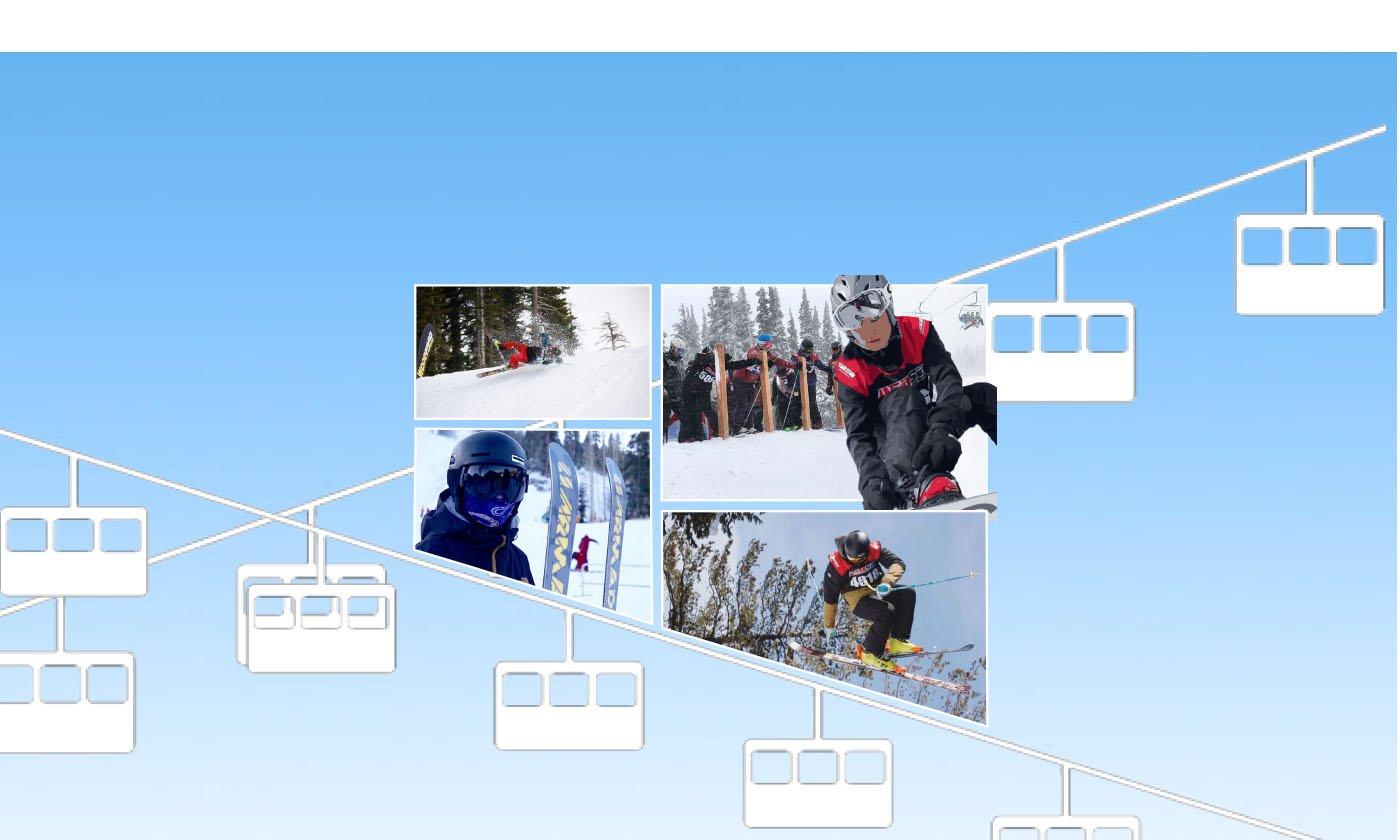 Gliding down the Slopes

Asnowboard, personalized with diamonds, twinkles and glistens in the winter sun as senior Heather Lin straps herself on. Despite the built-up muscle memory instilled from years of gliding down snowy slopes, she still feels butterflies in her stomach moments before her competition begins. Then she is off, navigating her way through a series of gates on a hill, racing against only one other competitor, in what is called a giant slalom event.

Lin started snowboarding when she was nine in Boston and started competing during her sophomore year. She now is part of the United States of America Snowboard and Freeski Association (USASA).

“I always go up to Tahoe for vacation in December, so that year we went earlier, and I signed up for a competition and got introduced to the field,” Lin said. “Everyone was very welcoming and friendly, and I liked the environment, so I continued competing.”

Lin is a self-taught snowboarder; she has never worked with a coach, instead learning from hours of YouTube videos at the start of her career and creating her own practices and workouts specific to the skills involved in snowboarding.

If she wanted one, she’d have to join a team with large time and financial commitments.

However, Lin said it is not hard to maintain a practice schedule if one has enough motivation. For example, to practice balancing skills, Lin often stands on a board on top of a large wooden cylinder as she watches TV.

“Especially since we live four hours away, it’s not realistic to drive up every weekend to practice,” Lin said.

Growing up, Lin said she was involved in a variety of sports. Up until a year ago, she competitively danced, specifically ballet, and also played basketball. However, she said snowboarding directly called to her passion, as it allowed her to be flexible with her schedule and commitment.

“Snowboarding is not only something I can compete in, but it’s something I can enjoy for my entire life. I don’t need anyone to help me do it. Like if I dance, I’d have to be a part of a team. But snowboarding is more about fostering both the hobby and the competition. Whether or not I continue will depend a lot on college and my future. But I feel like it’s really easy to maintain because winter comes, and there’s snow in a lot of places. ”

Lin competes in three events: slalom, giant slalom, and boardercross. Slalom and giant slalom are the two technical events of snowboarding competitions. Boardercross involves racing through a course with various jumps and turns.

“Boardercross in the Olympics is super insane, and I recently started doing that, although not to that level yet,” Lin said. “You race with your friends and go through the course with a bunch of really fun elements like rollers and jumps. The parks do a really good job of doing those courses. But you need agility and grace, and lots of strength, which I got through dance experience.”

Unlike her first experiences on a snowboard, Lin had to research and prepare for her first competitions by finding several different institutions that host events. At her first competition, in December 2016, Lin placed third for both slalom and giant slalom events. In 2017 at Nationals, she achieved 21st place out of approximately 150 competitors. Lin then placed first in giant slalom and second for both slalom and boardercross in the South Tahoe competition. During 2018 Nationals, Lin climbed up to 19th in boardercross.

“You have to think about competing in steps,” Lin said. “I found this thing called the Olympic pipeline a while ago, which is the way you get to the Olympics in snowboarding, because every sport has their own way. For me, I’m still at the first step, USASA, the roots of where you learn to snowboard.”

For now, however, Lin enjoys competing professionally, and is intent on a path that may lead to a spot in the Winter Olympics.

Every year, she writes her own schedule involving all her competitions and training. She competes in regional events from December to March.

“This year, I scheduled to take my finals before my slalom/giant slalom competition in December,” Lin said. “I’m going to compete and then train the week after. In terms of other competitions, my busiest month is February. Last year, I went to Washington to compete in their state championships to get points for Nationals, to secure a spot.”

As she approaches the end of high school, Lin hopes to continue competing. Because of the inevitable shift to college, Lin said she is researching schools that, due to their location, would allow her to easily pursue Nationals and even the Olympics in the next four years.

“Last year at Nationals I saw all the talent and people, all who were really good and it made me want to pursue something more,” Lin said. “National competitions are just on a whole other level. They’re so professional and different. I was really inspired.”

Although completely in love with the sport, Lin said she sees an absence of women representation and first recognized this issue when attending a training program at Big Bear Lake, Calif. entirely focused on promoting women in action sports.

“There are definitely not as many girls as guys,” Lin said. “There are quotas for Nationals, and for girls, there were only 22 spots for girls in my age group. For guys, there were 80 in the same category. I guess when you think of snowboarding you don’t think of a bunch of girls doing it, and I see girl snowboarders getting criticized unfairly.”

Lin was introduced to many winter sports while living in Boston — the first sport, at a mere five years old, was skiing. For her, snowboarding stuck; for others, like seniors Aiden Chang and Harrison Frahn, skiing was the sport that became more than an interest.

Chang got into skiing about seven to eight years ago, but started competitively four years ago in his eighth grade of middle school. Unlike Lin, he travels to Lake Tahoe every weekend to practice.

“I finish school on Friday, immediately drive up to [Lake] Tahoe, and ski on Saturday and Sunday for a combination of about 22-26 hours,” Chang said. “I practice from 7 a.m. to 2 p.m. on the slopes, then 4 p.m. to 9 p.m. at Tahoe, where I can learn my tricks on a trampoline and wooden skies into a foam pit.”

As a freestyle skier, a discipline that comprises of speed, sportsmanship and performing aerial spins and flips, Chang participates at a high level of competition.

“To freestyle ski, you need foundational skiing skills and a sense of awareness with your body. You have to have commitment in order to successfully practice and execute the tricks you wish to practice. I argue that this is one of the most dangerous sports to participate once you start to hit a higher level of competition. There is only so much you can get injured on 15-20 foot jumps but once you start hitting the 50-60 feet jump a single mistake can cost you lots.”

Chang said he chooses to ski due to his love of the nuances of the sport, as well as the community of his league.

“I enjoy skiing for the feelings that happen when you are in the air and how much you can progress in the sport,” Chang said. “The best thing about freestyle skiing are my teammates and the people who ski. They have a very down-to-earth feeling, and when competing against each other, each person brings their own unique style into their skiing and other people try to learn from it rather than criticise it.”

For Frahn, who participates in the sport recreationally, skiing represents a family tradition.

“I’ve skied since I was about five,” Frahn said. “My dad has always been really into it. He was the person who got me started. Skiing is hella fun, until you crash; the feeling of bombing downhill is addicting, and it’s hard to find any other sport that gives you the same rush.”

Although skiing competitions are mainly populated by competitors, they are open to all; therefore, Frahn and his friends still enter in competitions.

Last year, he entered the Kirkwood Mountain ski competition and won first place, and to him, this demonstrated his ambition.

Frahn said, “I really like skiing because it gives me a feeling of freedom that I can’t really get anywhere else. It’s not that different than other winter sports like snowboarding, but I started out with skiing and that’s what I stuck with. It’s pretty different than non-winter sports though because you aren’t really competing against others most of the time — you’re either with friends or racing against your own best time. ”