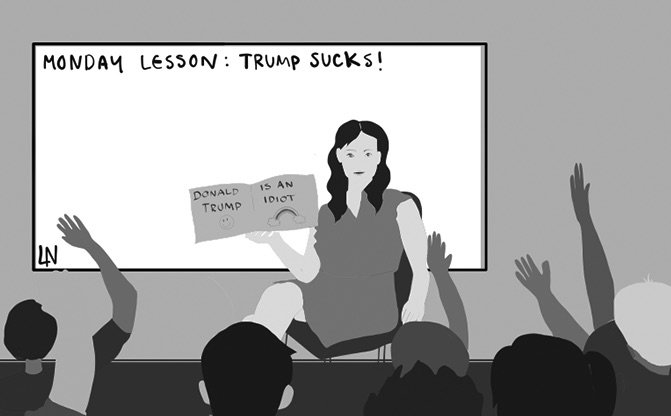 Teachers should be mindful of all political views

In today’s extremely polarized political climate, America has developed an interestingly  hostile attitude when it comes to expressing one’s views about certain controversial issues, such as abortion or immigration. Tempers flare, feelings are hurt and a notion is instilled that some  views are “better” than others.

Since politics is such a powerful and prominent aspect of society, it surrounds us — sometimes even making its way into the classroom. Although a school environment encompasses a diverse spectrum of political ideas and provides a setting for students to gather and discuss political events, it can also be a place where authority figures display their political biases.

Teachers should refrain from expressing personal views when discussing politics, because they often neglect the opposing sides. They also run the risk of influencing students and not showing respect for all students’ backgrounds.

For most students, the discussion of politics naturally arises in history or government courses. When discussing the building of this nation and its political infrastructure, controversial laws and policies within America’s history inevitably come up.

While some negative pieces of history, such as slavery, may not be widely disputed anymore, many events such as the removal of Civil War Confederate statues still have political relevance and should be presented in a balanced fashion that respects different viewpoints.

According to Palo Alto Unified School District Board policies, teachers are expected to present all sides of a controversial issue as well as ensure all lessons or discussions are grounded in facts. The goal of such policies is to help students identify information without promoting any point of view.

Although most teachers strive to meet this standard, teachers can sometimes over-teach or slightly neglect one side. It is important that students hear both sides of an argument to avoid bias and come to their own conclusions.

By fully understanding different viewpoints, students can view the argument through their own lens and absorb their own facts.

With the privilege of teaching younger generations comes responsibility, as teachers must ensure parents and administrators they are guiding students in the right direction.

Teachers should never exploit their power.

Students see teachers as intellectually authoritative figures, so what they teach students can potentially cause students to question their own beliefs or see the teacher’s view as superior because of their status.

According to history teacher Stephen Foug, his beliefs evolve and change over time so he would feel ashamed if he proclaimed authority regarding highly politicized ideas if he was, in reality, ill-informed.

Even though Palo Alto is often dubbed a “liberal bubble” and the Paly community is also seen as left-leaning, one cannot neglect groups of people with differing political standpoints.

Yasmeen Gavande, senior and leader of the Paly chapter of Young Americans for Freedom Club, says her conservative club has been greatly affected by the District’s policies.

The policy enforcing the presentation of both sides of a topic prohibited the club’s pro-life speaker from coming to the Media Arts Center.

According to Gavande, the system is somewhat backwards and unfair, because one of her teachers proselytizes the importance of a woman’s right to choose to students.

It is frustrating for her to be restricted by the board’s policy, but then be subject to the opposite treatment in the classroom. Conservative students are aware that Paly is a fairly liberal school, but that shouldn’t mean that they have to simply withstand this liberal bias just because they are the “minority.”

Just as it’s seen as wrong for a teacher to profess religious ideas to a group of students, it should not be acceptable to promote specific political ideas.

Because a teacher can’t be 100 percent sure of everyone’s background, respecting different political affiliations is a must. While it is true that trying to tiptoe around certain topics to avoid offending any groups of people can be arduous and almost impossible, most teachers do a great job at staying neutral in the classroom when talking about politics. And teachers who sometimes slip up obviously don’t intend to cause any harm.

However, teachers’ actions can have an immense effect on students’ lives, especially in the realm of politics, so Paly should put more emphasis on presenting politics in a respectful manner.

According to Foug, he has tried to remain as apolitical as possible in the classroom and has even changed how he presents certain topics over the years by understanding other points of view and including them in the discussion.

Teachers shouldn’t have to be censored when it comes to controversial topics, nor should they feel pressured to ignore discussion of politics. However, they should be cautious and respectful when it comes to the message they send, in order to maintain a safe community at Paly.