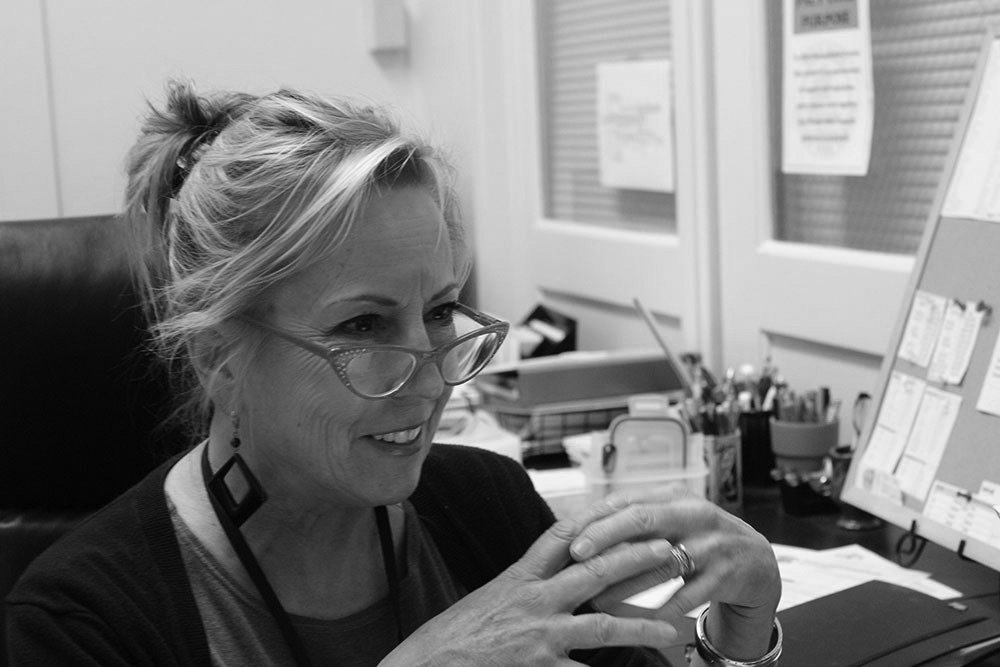 Benfield: A legacy of 20 years at Paly

In the main office, there is a box filled with notes of gratitude, all addressed to the same person. Carolyn Benfield has been receiving these letters for the last 20 years while working as the principal’s secretary at Paly.

After her long career at Paly, Benfield will retire from her position at the end of the semester.

When asked about her favorite aspect of Paly, Benfield didn’t take much time to think of her answer.

“The kids,” Benfield said. “This time is one of the most momentous turning points in your life and you don’t realize it when you’re in it. I know I didn’t.”

During her time at Paly, Benfield has worked alongside eight principals, including current principal Adam Paulson. Benfield considers no individual principal to be the “best.” Whichever principal Benfield is working with, she considers him or her to be her favorite.

Paulson has been working in the front office with Benfield for four years.

While working together, Paulson and Benfield shared a passion for listening to music.

“(Benfield) comes from a very musical family and I do as well,” Paulson said. “I’ll really miss talking shop with her about bands, about music.”

Although Benfield herself lived in Pennsylvania during her high school years, her mother was an alumna of Paly. Benfield would hear about Paly from her mother and look at pictures of the school in old editions of the Madrono., the school yearbook.

Before she worked at Paly, however, Benfield was a Paly parent; although she had never seen the school in-person, she already had a good feeling about it.

“When my son was going to start (at Paly), I immediately felt a sense, for him, of safety,” Benfield said. “I felt warmth and real compassion from the parents.”

After her son graduated in 1997, Benfield began working in the front office.

From what Benfield noticed during interactions in the Tower Building, students were as kind and respectful as they could be.

“We see, in the office, the best of kids,” Benfield said. “There’s no expectations: they’re not late for anything, no one is grading them on anything. They are absolutely just who they are.”

Benfield said she has needed patience, a sense of humor and a belief in people’s better nature in her work. Her job is anything but a desk job, however.

On a day-to-day basis, Benfield might be doing a range of tasks, like dealing with a sick child, counseling someone who is upset, cleaning stuff off of the porch or calling animal control because of an injured squirrel.

Among her duties, however, Benfield has a favorite: sitting down to talk with teachers.

“To me, it’s fascinating and it’s really heartwarming. Kids can’t possibly realize how much teachers care about them.”

Benfield also hopes students will have a keep a positive perspective on parents in the District.

“(Students) might not believe it, but we have a tremendously supportive parent population here,” Benfield said. “Our parents have been hugely generous with financial donations, with their time (and) with their kindness and compassion to the staff.”

Upon her departure, Benfield will cherish her memories of working closely with other administrators on behind-the-scenes aspects of Paly.

“That’ll grow character,” Benfield said. “If I can do the staff spirit dance in front of 2000 screaming teenagers, I can do anything.”

Benfield, ultimately, is grateful for the way students, teachers and parents have treated her over the past 20 years.

Benfield said, “I have been loved a lot here. Certainly that changes you for the better.”