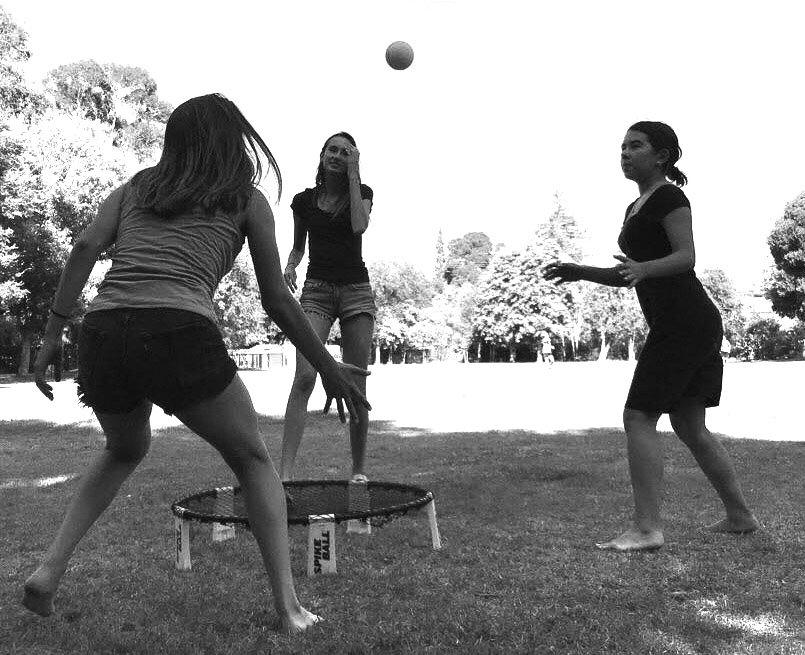 Spikeball trend at Paly creates sense of community among students

The canary yellow and black blur that seems to always dominate the quad at lunch and after school is hard to miss at Paly. The increasingly popular recreational sport “spikeball” has been drawing athletes and spectators from all grades to join and play.

Although the sport was first introduced in 1989 as “roundnet,” Kankakee Spikeball Inc. took over the market as the manufacturer of the equipment in 2008, which popularized a new name for the game: spikeball.

Since the start of the company, Spikeball Inc. has expanded beyond manufacturing equipment, to hosting tournaments, creating tutorial videos for beginners and advanced players and promoting  its app which allows players to find other users through posting or attending local pick-up games.

According to the Spikeball.com, the Spikeball Inc. website, the sport currently has over 4 million players all over the world, 24 full-time employees, over 150 tournaments every year and has even been promoted by Shark Tank, Casey Neistat, Dude Perfect, The Today Show, Inc Magazine, countless professional athletes and celebrities.

This year, co-presidents and seniors Ella Thomsen and Miles Schulman have continued to promote the sport by hosting their club on the quad on Wednesdays at lunch and occasionally during seventh period.

According to Thomsen, the club recieved over 100 student sign ups, but people outside of the club often use their equipment and participate at their weekly club meetings on the quad.

Thomsen said that she first saw people playing spikeball on the quad last year and got involved in Spikeball Club since Schulman, Blonstein and Thomsen were in the same Spanish class.

The game requires two teams of two, so new students can gain experience and meet new people by rotate competitors.

With 20 spikeball nets, on busy days, 80 students can play spikeball at the same time. Beginners can start their spikeball career by watching others play on the quad.

“I started playing spikeball last year when (Blonstein), the old Spikeball (Club) president, kept talking about it in class, and it sounded really fun. I came down one day and started playing with my friends, and it really caught on. My friend bought a net and we’ve been playing ever since.”

Other students, such as junior Faisal Ojjeh, had some previous experience with spikeball, but only started playing at school within the last two years.

“I first heard about spikeball in fourth grade,” Ojjeh said. “Last year, I saw some guys in the court, and I thought I’d join in and lay the law. I play for the fun of competition.”

Spikeball Club keeps some of its nets stored in the Wellness Center for accessibility. Students who want to play during their prep or afterschool can easily and readily find the equipment.

For Ojjeh, the sport is competitive and he typically tries to practice with his tournament partner before matches.

Spikeball teams that compete in official tournaments in Spikeball Inc. can then qualify to become a “Spikeball Elite.”

According to the Spikeball Inc. website, Elite eligibility for teams is determined by the team’s total points accumulated from its top five tournament finishes compared to other teams throughout the season.

Elite teams are sponsored by Spikeball Inc. and can earn special prizes.

These tournaments are goverened by the Spikeball Roundnet Association (SRA).

The SRA consists of nine members who discuss topics such as tournament formats, rule revisions and the rankings of teams in the official Spikeball tournaments.

Ojjeh’s team is one of many attempting to make the cut of annual eight men’s teams and four women’s teams that earn the Elite title.

Other students play recreationally and use spikeball as a way to meet other people and spikeball teammates.

“You get to meet new people, sometimes in other grades, and you get to build new friendships. I’ve played with other sophomores, juniors and seniors that I didn’t know before.”

According to Thomson, students also enjoy spectating because they can still talk to their friends while watching other students play and compete.

“You get people from all corners of the school playing spikeball,” Thomsen said.

Beyond school hours, Thomson and Schulman plan on hosting tournaments throughout  weekends starting next semester. There will be music, food and fun at the tournaments, according to Schulman.

“I think it’s really cool how before (Spikeball Club), nobody was on the quad,” Thomsen said. “Now, so many people are out and about. Without the nets, not as many people would be on the quad.”