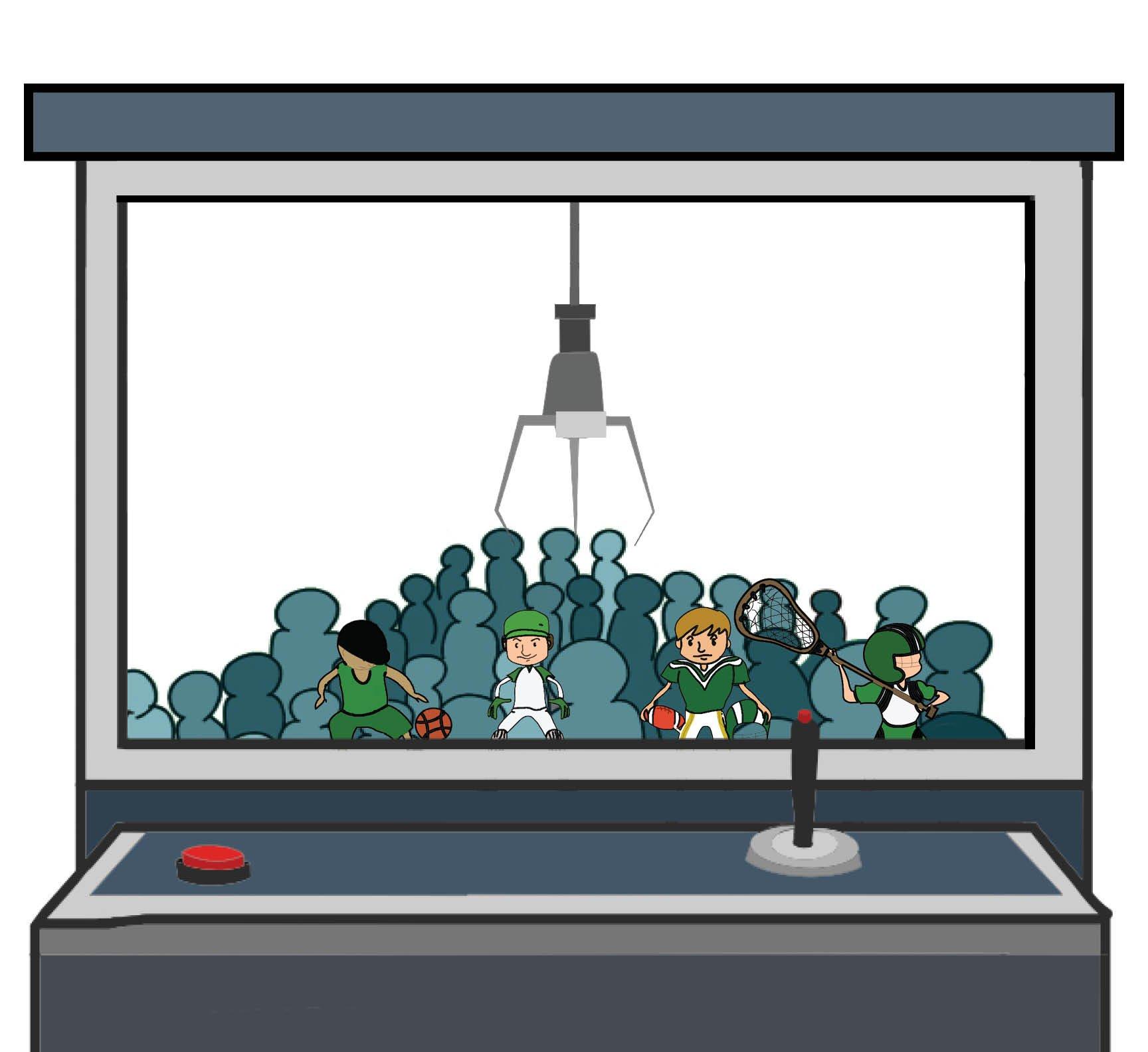 The coach’s conundrum: To keep or cut

When Michael Jordan dejectedly walked out of the gym of Emsley A. Laney High School in the cold winter of 1979 after failing to make the high school varsity team, no one could have expected the unwanted player to be selected as the third pick in the NBA Draft, dominate the league for 15 years and win six championships. Jordan’s story brings a crucial aspect of school sports into question: tryouts.

As evidenced by the many trophies and league title banners displayed in the Peery Center, Paly sports have a rich history. In order to compete for titles, however, Paly can only select the most talented athletes of the study body to play on its sports teams. Tryouts can be a grueling, sometimes brutal process, and prompt a tough question: how do coaches determine who will make the team and who won’t?

In certain sports, tryouts have a simple structure. According to boys golf coach Doyle Knight, his tryouts are straightforward.

“My criteria for a golf team (are) pretty simple,” Knight said. “(The players) get four days where they are out on the court playing, and the 10 to 12 players who score the most get to stay on the team.”

According to Knight, besides natural golfing talent, players are also expected to actively participate in team events and fulfill their responsibility to the team.

“It’s mostly just how well they play,” Knight said. “But they also have to actually commit to (golf) even if they play well. They still have to be there when everyone else is there (during practices and tryouts), and that’s probably the hardest.”

Matthew Marzano, a guard for the boys varsity basketball team, also thinks attitude is an important aspect of a good player.

“I think that if you are the hardest working person, you should make the team,” Marzano said. “Skills should not be the only criteria. There are other things that players should be chosen for like being a good person, leadership, teamwork and working hard.”

According to Marzano, the ability to get on well with others is important for both the player and the team because cohesion improves performance.

“The things that I appreciate most about my teammates is that they all care about me outside of the sport and that we are all a family. Whenever we see each other outside of school, we make sure we say, ‘Hey’ to each other, and I think that is pretty cool. This is important because it ultimately makes us better on the court when we are friends off of it.”

While friendship and cohesion are important components of a team, based on his past experiences of coaching basketball four years ago, Knight said coaches might have their own expectations about what the team should look like, and that can also factor into how the team shapes up.

“A coach has a certain way that he wants his team to play,” Knight said. “And you will be looking for the players that are going to fit that style. That sometimes makes things tough, because some kids just don’t play that way. But mostly, I was able to work with the kids and conform them into that if they were athletic and good enough to be in the team.”

In addition, Knight said the criteria of selecting players might be different between the varsity and freshman team.

“(The) varsity team might care more about winning the games, which is totally reasonable,” Knight said. “But for me, from the freshman point of view, attitude is a big thing. Their attitude determines how much they can learn from their experiences of participating and how much they would be prepared by the time they try out for varsity.”

Social studies teacher and boys lacrosse coach DJ Shelton said there are many different characteristics coaches look for in players, and many traits that can contribute to a winning team.

“I think you can ask any lacrosse coach probably in the world, and they’ll probably agree that there is not one kind of good lacrosse player,” Shelton said. “You can have slower kids that have really good skills, and you can have really fast kids with lower skills. They are both really important components of the team.”

While talent and skill is important, Shelton said a good lacrosse player needs to have a good understanding of the game.

“Being able to understanding the game is what separates a good athlete from a good Lacrosse player. But I try not to judge a kid on it during tryouts, because the understanding comes from experiences.”

According to Shelton, however, there is a standard that has to be met before a player is allowed to participate in the team — a minimum GPA of 2.0.

“We are not going to keep people in the team this year if their GPA ever goes below the minimum eligibility standard,” Shelton said. “Participating in a sport is usually a really big time commitment, and it’s important for kids to be able to balance their schedule. Even after they go  to college, they are student athletes, not athlete students.”

According to the National Collegiate Athletic Association (NCAA), a student needs to finish 16 required classes from high school (including four years of English and three years of math), and have an average GPA higher than 2.3 in order to participate in a college sport.

“Our (junior varsity) program is non-cut, and partly because lacrosse needs more players than other sports like basketball. But beyond that, I actually enjoy having more kids in my team that are learning the sport. It is really cool to see people, especially seniors, just pulling kids out of a drill and teaching them. Those are the moment when they are having a good coaching experience, and more importantly, spreading their love of the game.”

The current system of preparing the kids step by step from beginners to experienced players, in Shelton’s opinion, is better for students as it’s more consistent to the style of college sports.

“There is no way that most freshmen are starting in a college sports team, regardless of the sport,” Shelton said. “You ride the bench freshmen year, and it’s just about learning, developing, going to the gym more … That is a more typical process of developing for kids. That’s why I would rather have a group of kids that are learning the sport, and by the time they become juniors and seniors, they would be ready for varsity because they have been in the system for a while already.”

According to Shelton, a coach should be able to develop the skills of his kids and improve different aspects of their game.

“I think (having more learning-level kids) is a testament of the team dynamic,” Shelton said. “And it’s also a testament on coaching in terms of ‘can we improve kids.’ I look at it as a personal challenge to prepare a kid who is either early in his stage of learning or never hs learned before, and have them be ready to play by the end of the year.”

Despite the efforts of many coaches to keep more players in the team, many passionate and talented players were not able to make the team for a variety of reasons.

Ernesto Cruz, the girls soccer coach at Paly, said not making the team does not necessarily mean a player is not good.

“We get so many bodies trying out, and we cannot keep all of them,” Cruz said. “We let a lot of good players go, and it breaks our heart. But this is tryouts. They are very good players, but there is someone better than them.”

Speaking from the perspective of a basketball coach, Knight said tryouts are a good process for the players to know where they are and understand what the next steps are, regardless of the result.

“I’ll always tell (the players being cut) to join a league, play in a tournament, practice their skills, and try again next year. And a lot of them ended up make varsity. Being cut is not the end of the world. It just tells them that they need to work a little bit harder to make the team next year.”

Sophomore Dylan Chang, who tried out for the junior varsity team last season but did not make it, thinks that while not making the team  was frustrating, it helped him realize where his problems were and how to improve.

“I was disappointed and kind of frustrated at myself when I heard the news of me not making the team,” Chang said. “But from my experiences of trying out, I realized that my problem is the lack of on-court experiences. And now I’m looking forward to more practices and games to build up my experiences.”

As part of his training plan, Chang chooses to participate in the National Junior Basketball (NJB) league and hopes to gain more experiences from it.

“I chose to participate in the NJB league for gaining more experiences,” Chang said. “These experiences help me develop my leadership and teamwork skills, as well as my ability to make the right decision on the court.”

According to Chang, the passion toward basketball is what motivates him to keep training himself for better.

“I really enjoy the feeling of cooperating with my teammates for the win,” Chang said. “This ardor is what motivates me to keep playing. One should never stop trying on things they have passions on, and that’s how Michael Jordan becomes the god of basketball.”