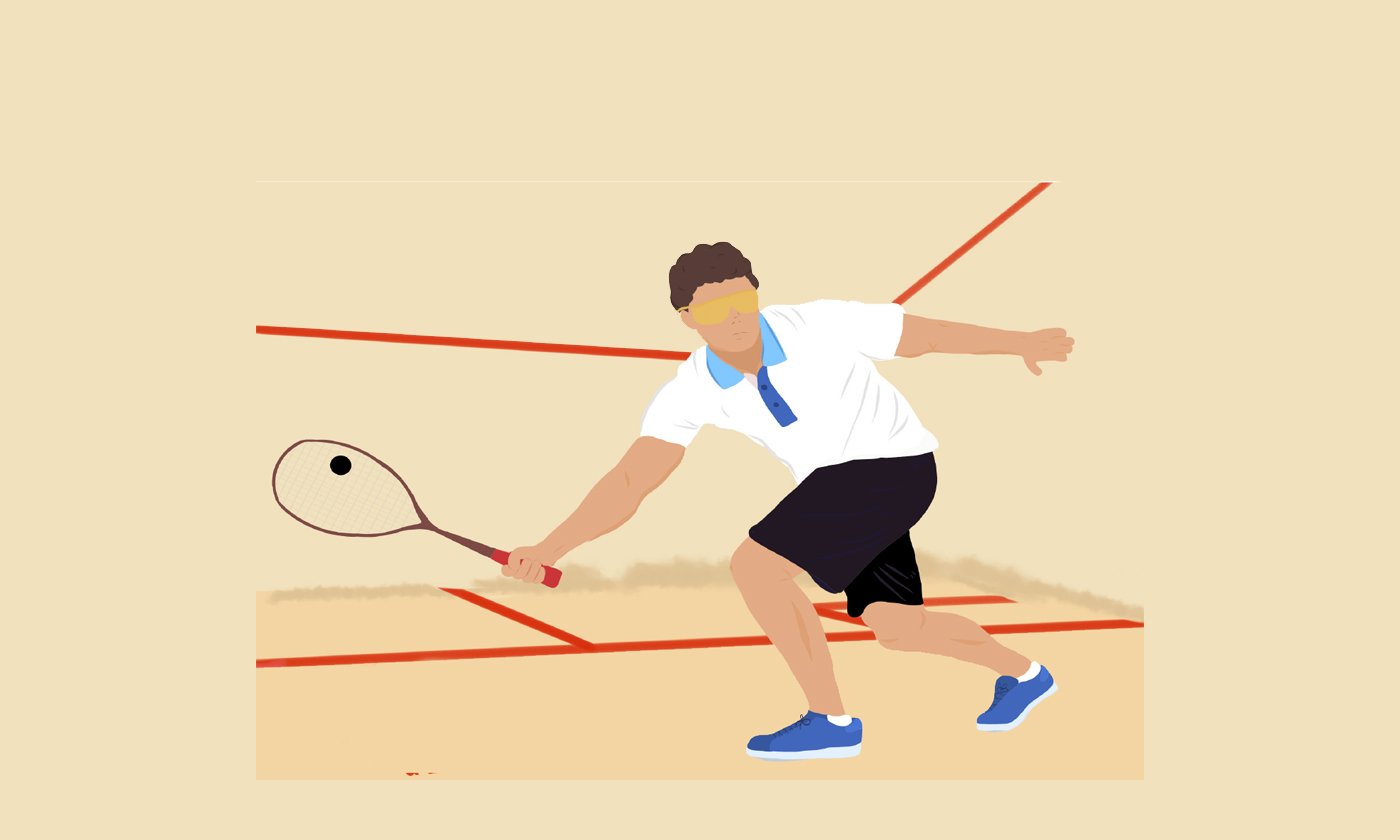 He enters the glass box. As he shuts the door with a ball and racket in hand, he finds himself on a 9.75 by 6.4 m court right next to his opponent. Balls on this court can reach up to 170 mph, a terrifying speed for some, but for squash player and junior Ben Scheve, it’s just another day on the squash court.

As squash’s popularity continues to rise, more people, young and old, have found themselves drawn to the peculiar sport. For the past five years, excluding 2016-2019, squash has seen a 66 percent spike in participation globally, according to U.S. Squash, the national governing body for the sport. Requiring a wall, a ball and a racquet, squash shares many characteristics with sports such as tennis, badminton and racquetball.

“Squash is a ball sport played by two players in a four-walled court with a small, hollow rubber ball. The players must alternate in striking the ball with their racquet and hitting the ball to the front wall of the court,” Scheve said. “If they hit the ball above the top line or in the tin or don’t have the ball reach the front wall or if they don’t return the ball before it bounces twice, (they lose).”

Squash was first played in 1830 at Harrow School, London. School pupils experimenting with a punctured racquetball found that, when the ball hit the wall, it produced a game far more complex and demanding than traditional racket sports. This sport would not become an official sport until 1864, when the first squash courts were built.

Later, in 1904, the first professional squash tournament began in Philadelphia with only six entries. 12 years later, the very first American squash championship was created. Then in 1928, a group of professional American squash coaches formed the very first American squash association, the United States Professional Squash Racquets Association, the same association that would later become known as U.S. Squash. Fast forward 100 or so years to the current day, squash now has varsity teams in Ivy League schools and in top liberal art colleges and boasts a global following of 20 million players in 185 countries.

According to Scheve, who has played squash since second grade, the sport is fast-paced and requires one to be quite proficient with one’s racket.

“(Squash) is really fast paced and takes a lot of hand eye coordination.”

World records confirm Scheve’s claim; squash is extremely fast-paced, as balls can reach up to 176 mph in a closed court. This fast paced state of the game can be explained by configuration of the courts.

“Because you’re playing in a closed court, you can essentially hit the ball as hard as you want,” former Paly student and nationally-ranked squash player Aman Mittal said.  “The amount of technique, footwork, agility and focus needed to play (squash) is huge.”

Mittal started playing squash around the age of six after being introduced to it by his father and some family friends. After trying out some other sports, Mittal decided squash was the best fit for him and, at around the age of 12-13, began playing at a competitive level. Mittal would eventually become nationally ranked among the top 60.

“I had been trying other racquet sports like tennis, but squash resonated with me a little bit better, so I stuck with it,” Mittal said.

Additionally, Mittal said squash has made a positive impact on his life by allowing him to deal healthily with nerve-wracking situations, situations similar to those he experienced on the court.

“It definitely helped me competitively in a lot of aspects in life — in order to healthily deal with stressful situations on and off the court. It’s honestly an amazing workout.”

For every hour of squash played, players can burn up to 750 calories. Additionally, the sport provides an upper and lower body workout through the sprinting and running around the court and through swinging and hitting. In 2003, Forbes rated squash as the number one healthiest sport to play.

Unfortunately, despite these benefits, Paly hosts no squash team, and thus, squash players must look elsewhere to practice their sport. Similarly, although the World Squash Federation is recognized by the International Olympic Committee, squash is not part of the Olympic Games despite numerous petitions for its incorporation. However, squash has been a medal sport for prominent international events such as the Maccabiah Games, Pan-American Games, World Games, World University Games, Commonwealth Games, Asian Games, Arab Games and World Master Games. Additionally, a World Games for squash was created in 2005, and has been hosted annually since.

Although squash continues to grow in popularity, it still remains relatively unknown despite the thrill and excitement that surround it.

Mittal said, “A lot of East Coast high schools have squash programs, and in parts of Europe and Asia it’s pretty popular, but in general I don’t think it gets the recognition it deserves.”