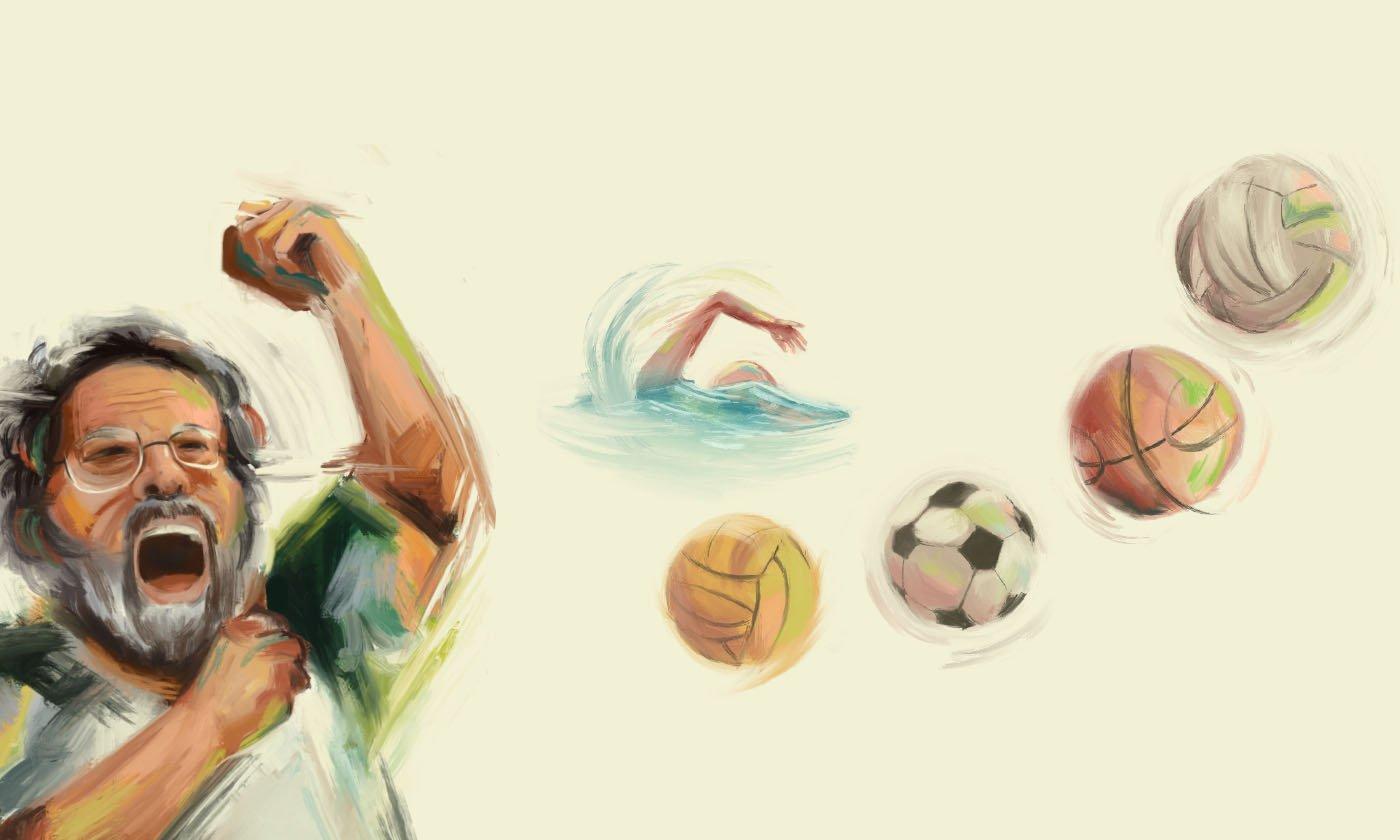 Minutes before the swim meet begins, a man dressed in a Paly jersey pumps his fist in the air, surrounded by a circle of student athletes.

“ …This is the last day of the Republic. Fire!” he yells.

The Star Wars-themed speech is led by Dan Starrett, belovedly known as “Superfan Dan” by the Paly athletic community. The title is well earned; Dan has attended nearly every Paly home game, regardless of the sport, for the past 25 years. While almost every Paly student knows of Superfan Dan, few know his backstory.

A Paly graduate himself (Class of ’85), Superfan Dan did not begin attending Paly games until 1993, following a series of crises in his personal life which ended in tragedy. A family crisis that year likely caused Starrett’s father to have a heart attack the following year, and a few months later, after Starrett had separated with his family and was becoming accustomed to living on his own, his father committed suicide.

“I was probably something of a (Paly sports) fan by the fall of ‘93, but what really pushed me into it was those crises. (Going to games) helped me get through them. I chose to be a high school sports fan instead of becoming a druggie or an alcoholic.”

Watching Paly athletics provided Starrett with inspiration to keep going, allowing him to overcome his grief and channel his time into something he loved: supporting and encouraging students.

He discovered this passion while watching the Central Coast Section (CCS) track and field event at San Jose City College in 1995.

“(As I watched), a feeling of great love welled up in me,” Starrett recalled. “I felt very happy.”

Since then, Starrett has been regularly attending Paly games not just for the athletics, but for the students.

“I like to lead the cheers (to) help the students win … Even now, when I’m facing some challenges, (attending Paly games) helps keep me going,” Starrett said.

“Having Dan at all of the games definitely affects how I play, simply because of the positive energy that he brings as he steps into the gym,” Al-Najjar said in a message. “I generally find myself more pumped to play after hearing the crowd chant one of his iconic cheers.”

“Superfan Dan can give some pretty motivating speeches and having him at every meet is something you can depend on,” Saul said. “Having another person cheering means a lot.”

Starrett’s dedication as a fan is unrivaled; he regularly attends nine or ten sporting events a week, alternating between different sports in order to watch all of his favorites and cheer on the players.

“(Dan) is a consistent source of support and passion for the program. He has no qualms about trying to get people psyched up. He shows up to all the events and I think it really means a lot to the kids to have someone there that is passionate about the sports like Dan.”

Starrett’s support for Paly athletes extends beyond Paly’s campus — one example of his exceptional dedication is his annual trip to the cross country CCS championship meet in Watsonville, a distance of almost 60 miles.

In addition to his willingness to travel lengthy distances in order to support the team, Starrett goes out of his way to attend games that are not in season at Paly, including club water polo matches.

Despite these extreme acts of dedication, Saul considers the most important part of Starrett’s role in the Paly athletics community to be his genuine love for Paly sports and students.

“I think the most memorable thing is just talking to (SuperFan Dan) and knowing that he is an ordinary guy that is invested in Paly sports for no other reason except for that he loves it,” Saul said.

Above all, Starrett said he considers himself lucky to have found a passion which brings him joy and encourages others to do the same.

Starrett said, “I want Paly kids to know I love them very much, and that if you’re ever faced with trials or difficulties, don’t resort to drug or alcohol abuse; be resilient, be courageous and find something you like to do and do it.”