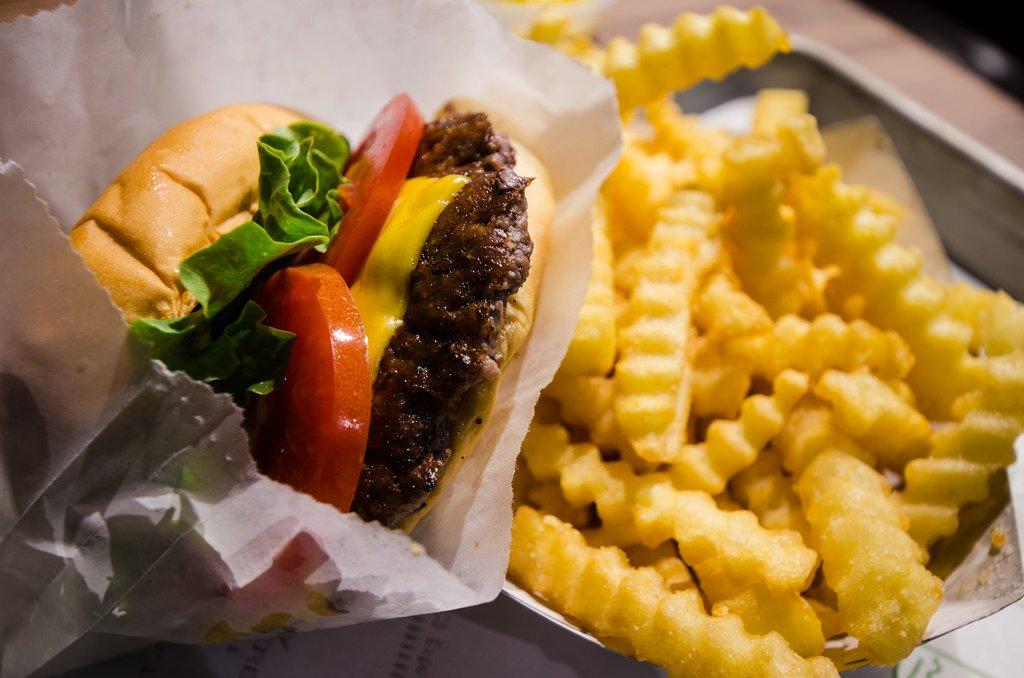 As one of the latest additions to the bustling Stanford Shopping Center, Shake Shack, located on 180 El Camino Real, epitomizes modern dining and has become a Palo Alto hotspot, serving decent food and solid milkshakes.

After waiting for about 30 minutes in a line stretching at least 30 yards out the door, I managed to make my way to the iPads that await customers in the front. Instead of a system with cashiers taking orders, customers add food and drinks to ‘Your Cart’ on one of many devices lined up by the door. In my case, about 15 minutes after ordering, I received a text message that my order was almost ready.

This unique ordering technique quickly established itself as efficient, as I was able to make it through what I first thought would be a multi-hour line rather quickly. However, with efficiency comes a need for seating, which was where I was most let down during my trip to the establishment.Since the iPad ordering system made it possible to accommodate so many orders and the restaurant lacked much available seating, the atmosphere was hectic, and I had to wait 10 minutes with my tray in my hand before I managed to scramble to a table––which I was lucky to even get to. The iPad system was essentially ahead of the restaurant itself.

Luckily, I managed to secure a table outside. If I had sat inside, I would have been surrounded by frantic people wandering around me, disrupting my meal.  Then, with half my meal to go, I was asked by a customer if they could have my table when I finished, and they annoyingly waited right by my table until I finished eating. This is a recipe for a slightly frustrating dining experience.Because the restaurant did recently open, the busy crowds will likely disappear with time, and will hopefully develop into a more enjoyable atmosphere.

The food menu at Shake Shack was diverse, filled with various options for both food and drink. There were several different types of burgers, hotdogs, french fries, milkshakes, frozen custard and much more.

The Shack Burger was not bad but was nothing special. Alleged to have a unique “ShackSauce,” I struggled to find any taste beyond what a standard burger would offer.

While a restaurant like In-N-Out Burger has a special sauce that defines its signature burgers, Shake Shack presents an ordinary piece of meat between two somewhat-soggy buns and some condiments.

The french fries, unlike the burgers, were wonderful. The crinkle cut strips were fried to perfection and had a delicious crispy texture. The salt ratio in the fries was perfect; every bite was flavorful and not a single bite felt too salty. I also decided to get the cheese fries, which has a self-explanatory name.

The cheese was a great touch. Unlike many restaurants that tend to overdo the cheese aspect of cheese fries, Shake Shack had a perfectly distributed amount of smooth, melted cheddar and American cheese. For dessert, a milkshake is the best choice. The frozen custard was practically just chocolate and or vanilla ice cream. Don’t get me wrong, I love both chocolate and vanilla ice cream, but when you are at a place called Shake Shack, you should probably take the hint and get a shake. Simply put, the shakes did not disappoint. I tried a chocolate malted, cookies ’n cream and strawberry shake. The chocolate malted shake was exquisite. It was just rich enough that it felt like more than just a fast food shake, but it was not too rich to the point where I felt sick to my stomach after finishing it.

By far the best shake of the three was the strawberry. I assumed it would be my least favorite, as I tend to lean towards chocolate options when it comes to desserts, but the strawberry milkshake was simply something else. It was sweet and may have been the best strawberry-based dessert I have ever had.

Overall, Shake Shack struck me as  a restaurant of desserts. Offering only average burgers, I would go back if I was craving something sweet, and the french fries were impressive. But the prices were high and not necessarily worth it for anything but the shakes, as fast food restaurants with lower prices tend to have just as good or better meals available.