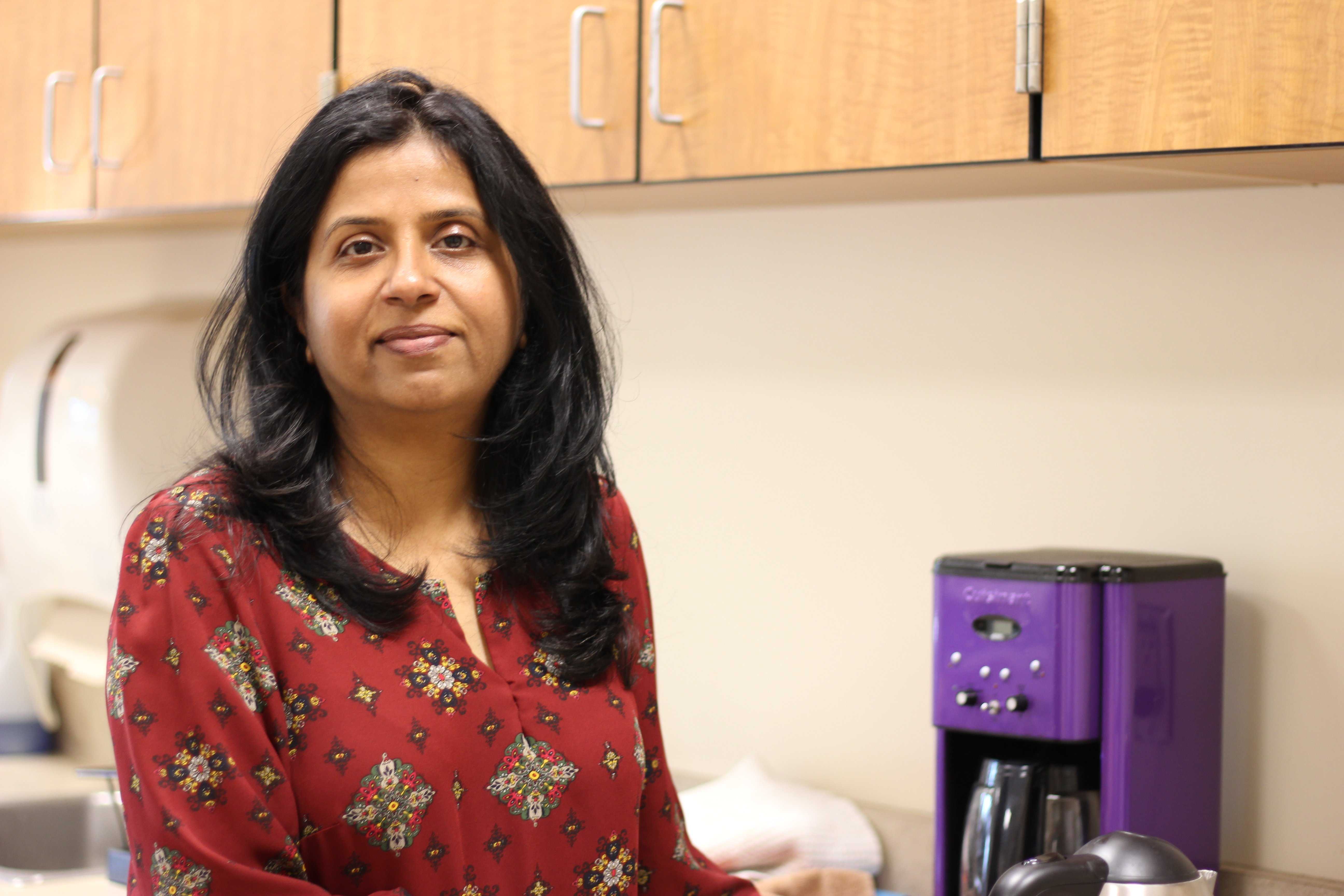 The lunch bell rings loud and clear in the Science Resource Center. A few minutes later, Paly chemistry teacher Ashwini Avadhani strolls in with a smile to greet her colleagues. She reflects on her last period’s chemistry lab with a fellow teacher, discussing ways to improve the methods and accuracy.

Many Paly students and teachers know Avadhani as the very knowledgeable and organized AP and Honors Chemistry teacher.

“She actually gets the concept she’s teaching — Ms. Avadhani clearly knows and understands chemistry. And when she makes mistakes, she admits to it, so I think that (is) really interesting and kind of cool.”

Before becoming a teacher, Avadhani had gotten her master’s degrees in organic and inorganic chemistry, and was a stay-at-home mom for many years. Her two children were raised in Palo Alto, have since graduated from Paly and are now attending college.

Avadhani has been teaching for 10 years, the last six of which she has spent at Paly. Avadhani said because her mother was a language teacher, she believes teaching runs in her blood. She first began teaching through volunteering at her childrens’ elementary school, Duveneck, where a teacher encouraged Avadhani to get her own credentials.

Avadhani’s expertise goes much further than what can be seen on the surface. Avadhani possesses an array of different experiences and a fascinating background.

While growing up in India, Avadhani acquired unique perspectives from her family members. She said they made her more aware of what freedom meant and the choices she had.

“Not a lot of people know that my grandfather was a freedom fighter for India,” Avadhani said. “He was a follower of Ghandi and he made his own thread, cotton, for the movement, and he taught me and the kids.”

After being taught to create her own thread, Avadhani now incorporates parts of her family history into her favorite hobby and daily life.

“I used to knit a lot. I haven’t done that in a long time, but now that I have an empty nest here I’ll get some time to do that. I love to knit. Another thing people don’t know about me is that I can totally change a flat tire in ten minutes if I have the right tools.”

It is clear that Avadhani’s has a drive for hands-on work, both in and out of the classroom.

According to Fang, Avadhani’s teaching style is interesting and interactive because she often teaches through labs, leading to a deeper understanding of the material.

“When we were studying the different common ions, we were given name tags that we wore and I was MgO4 [permanganate] but I accidentally said I was pomegranate,” Fang said. “I remember that [activity] a lot.”

Avadhani’s labs and activities help students gain more concrete insight and create memorable moments that increases the likelihood of students to have thorough comprehension of the lesson.

In her classes, Avadhani tries to forge a connection and relationship between herself and her students. She believes that teachers should get to know who their students are and find a way to relate to them.

“When I grew up in India, teaching was a very different world,” Avadhani said. “The teacher never knew who you were in the class because there were 60 students in a class…So there was no connection, there was no relating to students, (no) knowing what they do, who they are…I always thought the teacher should get to know a student.”

Fang initially thought Avadhani was intimidating, but quickly came to admire her as a teacher and person.

“After getting to know her and getting to talk to her about chemistry and college, she’s a really nice and a down-to-earth person,” Fang said.

“My first impression of her was that she is somebody who really knows her science and that she is really really organized,” Howles-Banerji said.

Avadhani and Howles-Banerji work together in the science department and often communicate about lessons and labs they have developed over the years.

“We collaborate informally, practically daily,” Howles-Banerji said. “(Avadhani) and I have shared a classroom for all four of my years at Paly. So we’ve worked together, whether or not we were teaching the same subject, we were still interacting and working on the same material.”

Despite many years of teaching at Paly, Avadhani maintains the same passion and enthusiasm for her work and the community.

“I love my time at Paly,” Avadhani says. “And what I like is: I live in the community, I teach in the community. I’m a parent and I’m a teacher. So in the last few years, I got to see both sides; what students go through and what parents go through. It made me more humble, I could relate to my students better, and the other way is because I’m a teacher, it made me a better parent. So I love what I do.”