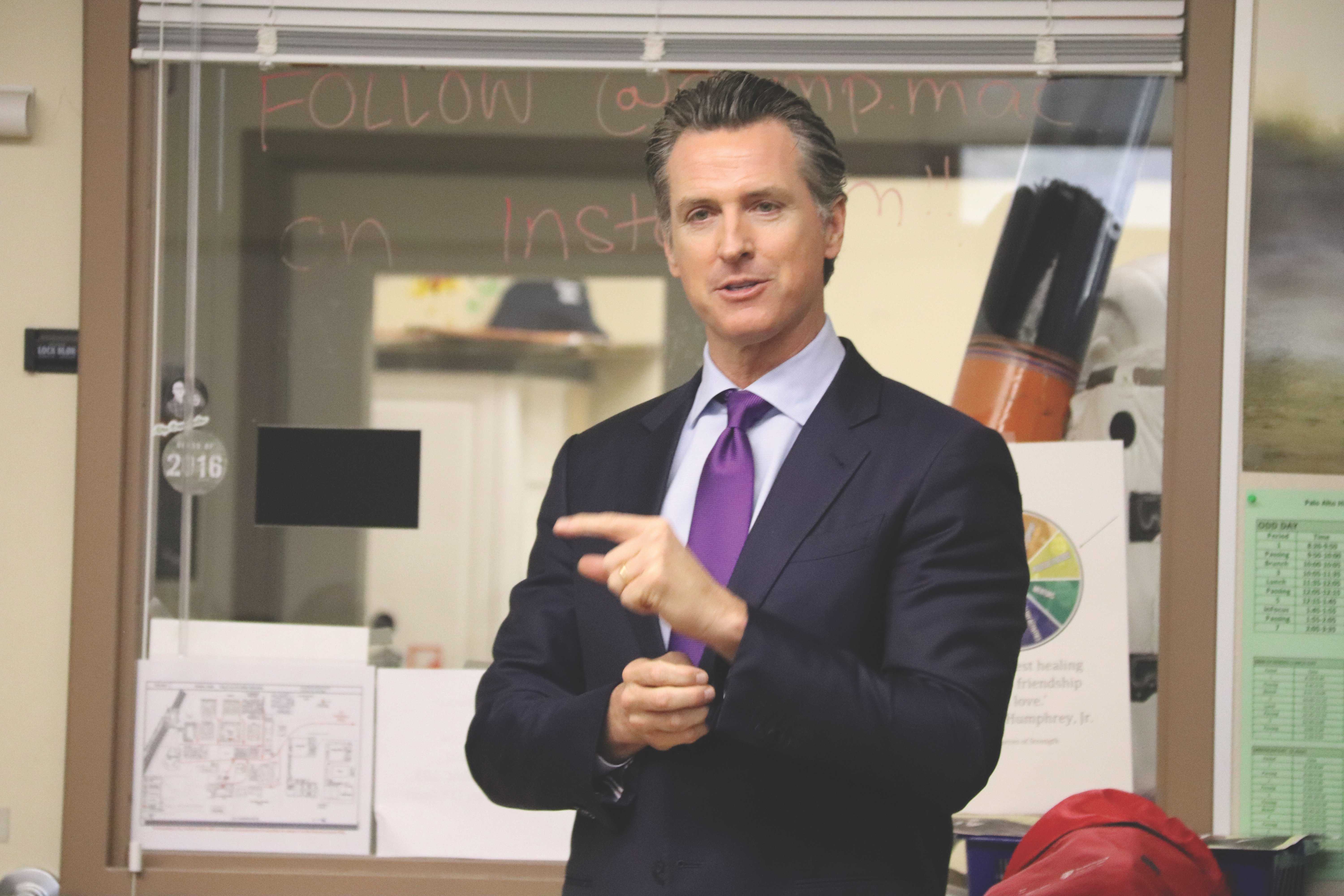 Paly alumni are making their presence felt in Sacramento. In the last seven weeks, Newsom has appointed four Paly graduates to key positions in his administration.

“That’s an impressive little group,” Newsom said during a recent surprise visit to The Campanile, acknowledging he had been unaware of their common high school alma mater.

He even went so far as to call several of them “rockstars” and praised all of them for their talents and strong capabilities.

Gordon was choir president her senior year at Paly, and was driven and diligent.

“She was one of the most confident students I’ve ever had,” Arnie Lim, Math Instructional Leader who taught Gordon at Paly, said. “From a young age, she would come across as poised in everything she did.”

Gordon studied housing and economic development at Wesleyan University. After discovering her talents in housing law, she became a tenant rights organizer and met then supervisor Gavin Newsom in San Francisco.

In 1998, Gordon went to law school at UC Berkeley and got a job at a law firm. However, her mentor at the firm was involved in a serious car accident and was away for a year.

“It just changed the whole experience of working there for me,” Gordon said. “I decided not to stay as a lawyer and another opportunity came up.”

After leaving the firm, Gordon returned to her hometown of Madison, Wisconsin to work at the Center on Wisconsin Strategy, which her friend ran at the time. There, she headed a project that linked clean energy and economic development and found her passion — she’s worked in energy and climate for the last 15 years.

“It wasn’t at all a linear trajectory, but I think that’s true for most people,” Gordon said.

Gordon’s expertise in climate change, clean energy and economic development contributed to Newsom’s decision to ask her to join his team as Office of Planning and Research (OPR) director, according to the Governor’s OPR website. Gordon said she plans on using her role to work toward a more sustainable California.

Lhamon began her career in law as a clerk for Judge William Albert Norris of the United States Court of Appeals for the Ninth Circuit. She left her position a year later to work as an attorney at the American Civil Liberties Union for the next decade.

She went on to work as Director of Impact Litigation at Public Counsel, America’s largest pro bono law firm.

“She’s a fearless litigator that doesn’t mind taking on the biggest institutions to get justice for her clients,” Hernan Vera, president and CEO of Public Counsel when Lhamon worked there, said in a December 2018 interview with U.S. News.

“She always ground out her work,” Lim, who also taught Lhamon, said. “She was a workaholic who still knew how to enjoy life, and it was fun to have her in class.”

On June 10, 2013, President Barack Obama nominated her for the position of assistant secretary for Civil Rights at the U.S. Department of Education and she was unanimously confirmed by the U.S. Senate less than two months later.

In December 2016, Lhamon was appointed chairwoman of the U.S. Commission on Civil Rights and was appointed legal affairs secretary by Newsom this January.

Elliott was a staff writer for The Campanile during his time at Paly, and stood out because of his eagerness to try new things.

“The most notable thing about Jason Elliott was his enthusiasm,” Esther Wojcicki, adviser for the Campanile, said. “He was always coming up with new ideas and was always enthusiastic about trying new things — and he was a very hard worker.”

Elliott studied American History at Columbia University. Just one year after graduating from Columbia, he went on to get a master’s degree in public and social policy from Harvard.

Elliott worked for San Francisco Mayor Ed Lee from 2009 to 2018 as a policy director for two years, Deputy Chief of Staff for six years and Chief of Staff during his final year there.

She completed her residency at Stanford from 2002 to 2005 and has been a pediatrician in San Francisco since 2007. She is also the CEO of the San Francisco Center for Youth Wellness.

Her work has helped spread awareness about adverse childhood experiences (ACEs). ACEs are stressful or traumatic events during one’s childhood that create a significant risk factor for substance abuse disorders and impact lifelong health and opportunity, according to the Centers for Disease Control.

A decade ago, a young patient who came to her and suffered from asthma, eczema and behavior issues inspired Harris to begin researching ACEs. She sat down with him to discuss his medical history and found out that he had been sexually assaulted as a 4-year-old.

She realized a pattern in the patients she had been treating — children who experienced the worst symptoms often had the most severe history of trauma, according to published reports.

Harris spoke about ACEs during her 2014 TED talk. The talk has over five million views and dives deep into the effects of parental abuse or neglect on the development of the brain — and the lifelong trauma that ensues.

The comments on the talk have a central message of thanks to Harris for addressing and shedding light on the issue — many commenters were victims of childhood abuse themselves who supported and reinforced Harris’ idea.

“As an adult who has been through many of the things she discusses, it would have been a lot easier if people had been educated about this,” one online commenter on Harris’ talk wrote.

This January, Newsom named Harris California’s first-ever surgeon general. According to the governor’s office, she will use her platform to combat the root causes of ACEs and reach out to young families across the state.

Newsom has already set aside $45 million to identify ACEs among children and adults who are involved in California’s Medicaid program, according to his budget proposal.

To read more about how students can move into politics and how Paly impacted Kate Gordon’s career, see “Paly alumni share their path into the world of politics” on B2.