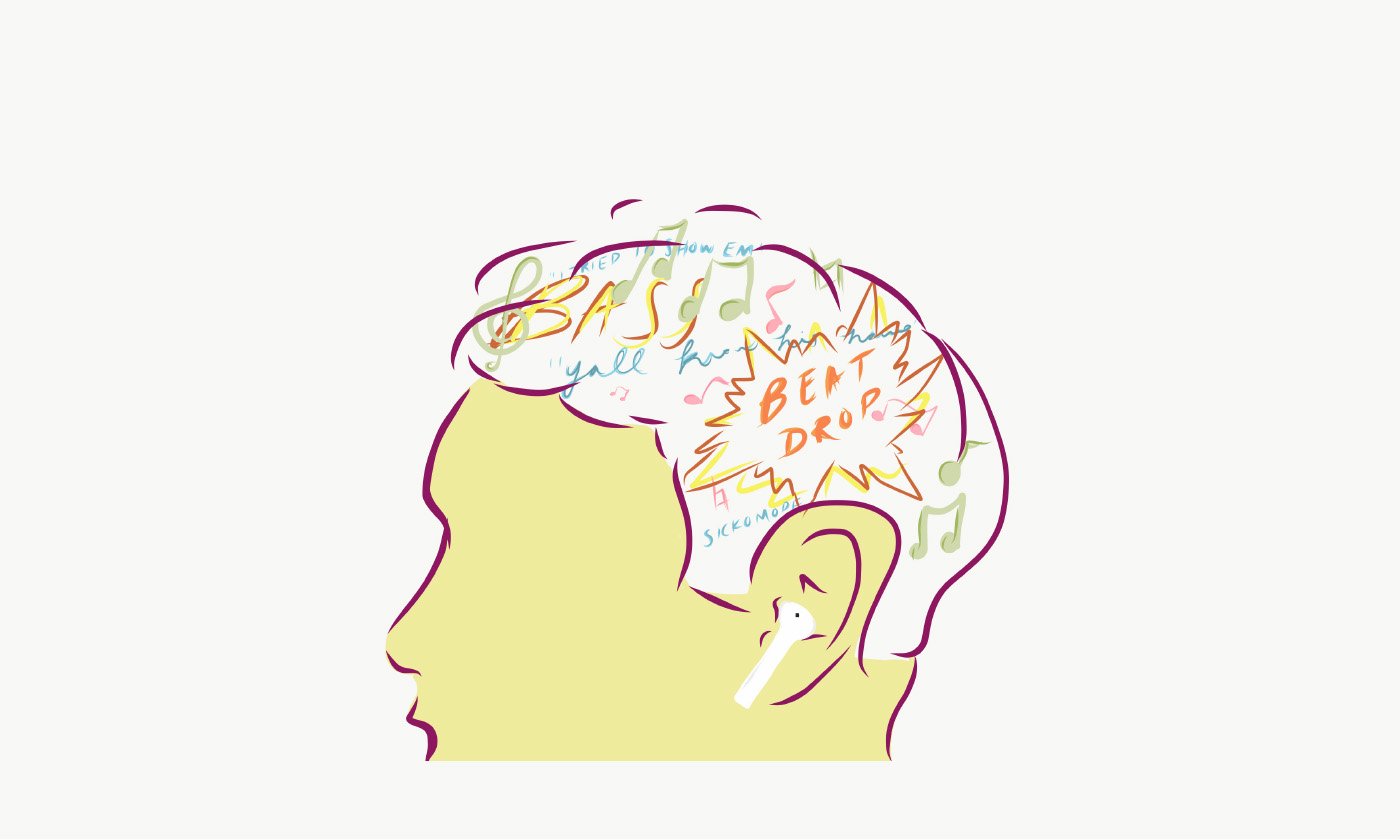 Nearly 30 students are scattered before AP Macroeconomics teacher Grant Blackburn, glancing back and forth between their desks and the presentation projected on the screen. Some type furiously on their computers, while others opt for an old-fashioned approach, handwriting their notes on spiral notebooks. Blackburn chooses to trust that his students are staying on task — that is, until he spots a small, long-stemmed white AirPod attempting to hide in the back of the room.

“I hate the fact that people have (AirPods) in their ears when they’re in my classroom,” Blackburn said. “I have no way of knowing whether they’re really listening to music or not.”

Tucked beneath tufts of hair and reaching just below the earlobe, AirPods are a subdued accessory compared to the classic pair of earbuds. All students that had mastered the complex art of running the white earbud wires up the inside of their sweatshirt and tucking them underneath their hood, concealing them from teachers’ watchful eyes, thanked Apple for the convenient upgrade, but teachers did not necessarily welcome the new product with open arms.

A portion of Blackburn’s frustration comes from a gap in understanding: individuals who are more versed in the systematics of AirPods often make the assumption that those around them are just as familiar with the audio device and how it functions. For example, senior and frequent AirPods user Claire Chen said, from her point of view, her AirPods do not necessarily inhibit her focus or ability to contribute to a conversation; she said she is still able to engage without intrusion.

“If I have one AirPod in, I won’t take it out because it’s quiet that where I can fully participate in a conversation without missing anything,” Chen said.

However, Blackburn, along with individuals who don’t own a pair of the little white earbuds, goes by what he can see, which is simply whether or not the AirPods are in a student’s ears.

“A lot of times, kids will tell me that they’re not playing any music, that it’s super quiet or that they’re not on, but there’s no way for me to know. Maybe this is my old-school way of thinking, but if you’re not listening to anything, why have them in at all?”

For teachers like Blackburn, the idea of music drowning out a carefully prepared lecture can be interpreted as a lack of respect on the student’s part, regardless of the volume level of the song itself, or the student’s ability to multitask. However, in a world swimming with distractions, conversational dynamics are constantly shifting, and social expectations are evolving as well. Pulling out a smartphone and sending a text message while conversing with a friend is no longer considered a sign of blatant disrespect, but rather a social norm.

Senior Walker Rosenthal said the recent increase in AirPods use is no different — having background sound isn’t a big deal and shouldn’t be considered offensive.

“If I’m talking to someone and it’s a quicker conversation, I’ll just keep them in,” Rosenthal said. “I would expect the exact same thing from anyone else. Keeping them in is kind of like a social cue that we’re just saying a quick hello to each other; we don’t have to say it, but we just know.”

Rosenthal said he does not attempt to conceal his AirPods from view; however, Chen takes advantage of the fact that the audio device is fairly discrete. When kept to herself, AirPods don’t have to be a big deal, but more of a personal tool, according to Chen.

“My AirPods are usually hidden in my hair, so I don’t think people can tell  I’m using them,” Chen said. “If people found it disrespectful, I would take them out immediately, but most people don’t even realize I’m using them.”

Athletes, in particular, reap the benefits of the contemporary audio device, as they allow the user to move freely, unlike the classic white wired earbuds or even Bluetooth sets produced by brands such as Beats and Bose, which sport wires that wrap around the user’s head.

Rosenthal said he bought his AirPods with the intention of using them to work out, and has found the best use for them during his time in the gym. Certain athletic activities­ — such as lifting weights, doing stand-still workouts or rock climbing — make excellent use of AirPods, as one can keep their phone nearby and not have to worry about losing Bluetooth connection.

Senior Bryan Kagiri, a sprinter on the track team, said his pair of AirPods can be effective depending on the type of running he is planning on doing on that particular day.

“They’re really convenient because they stay in while (you’re) running — but it has to be light jogs only. If you’re all-out sprinting, it’s really hard to maintain them, and you’d have to sprint with a bulky phone in your pocket since the Bluetooth connection doesn’t reach too far.”

However, there are ways to work around carrying a cell phone while practicing or running if you are properly equipped, something Chen has discovered.

She connects her pair of AirPods to her Apple Watch, a device that she always keeps around her wrist during her soccer practices, and can control her music from the watch without having to worry that the Bluetooth connection will fail.

The watch is slightly restrictive, preventing her from picking from a wide selection of music, limiting her to making skips within a selected playlist. Nevertheless,  she appreciates that the AirPods-Apple Watch combination allows her to listen to pump-up music while warming up  at the beginning of practices and ultimately gets her in the zone to play.

Regardless of their benefits, Blackburn said the use of AirPods in a classroom setting gives students room to further distract themselves from the classroom focus. According to Blackburn, the music tugs at students’ attention, and he’d like to do everything he can to eliminate distractions from students’ lives, which includes making a future change in computer usage policies.

“Next year’s students are not going to be allowed to use laptops in my classroom, with the exception of certain times when it’s absolutely necessary,” Blackburn said.

“In addition to the fact that studies have proven that handwriting notes are more effective in terms of retaining information, many students aren’t using their laptops appropriately, and I want them to be as focused as possible in class.”

He said he, too, finds himself sidetracking and clicking on emails or checking his messages while he’s planning a lesson, for example, and understands where his students are coming from. It’s going to take an extra push to get students to focus, he said.