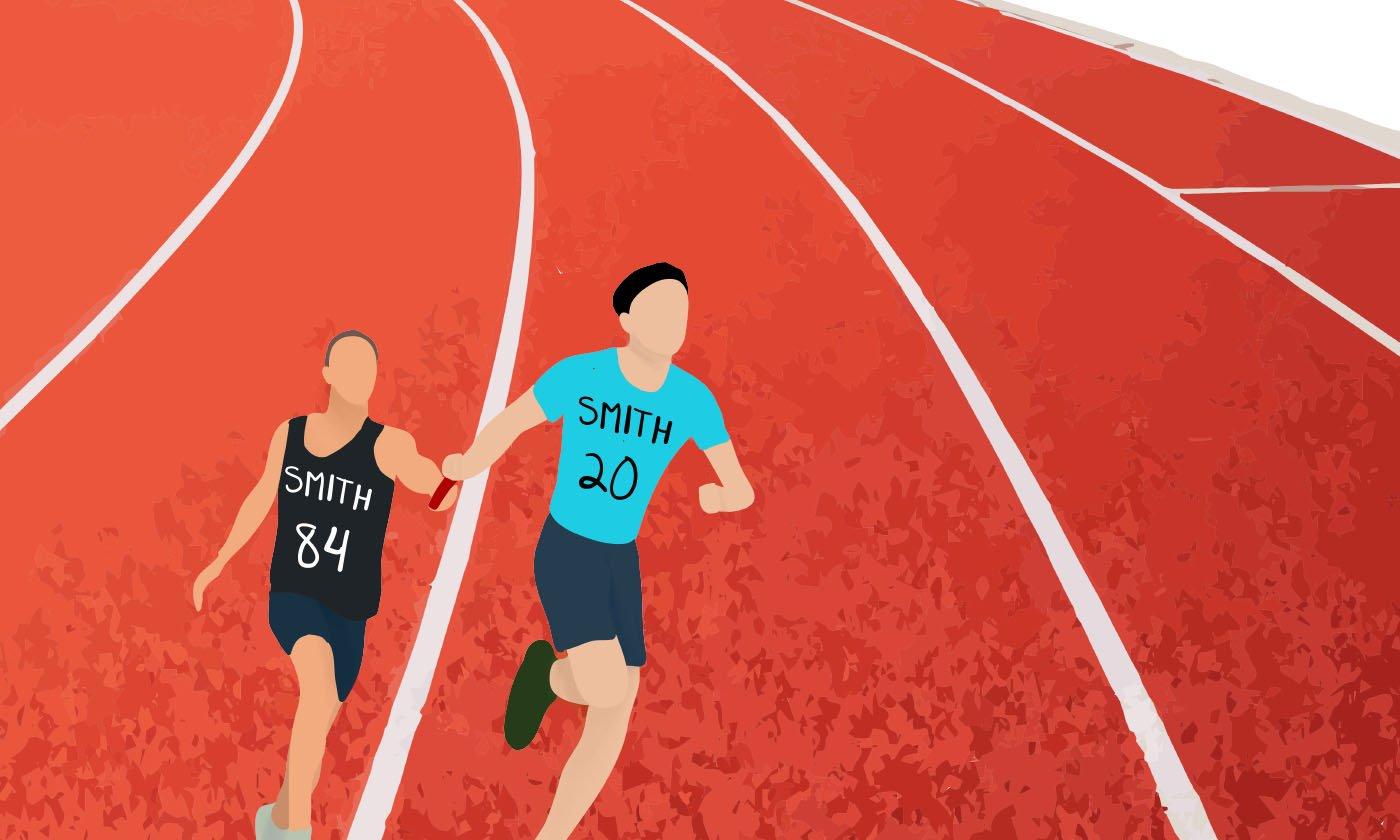 Passing on the baton

Heirlooms have always been a source of connection between generations in a family. Sometimes these tokens are physical objects like a ring or a set of china. But sometimes they are intangibles, like particular celebrations or stories or even the drive or talent for a certain sport.

Palo Alto High School has its share of these people — students who are recognized by coaches and fans as part of a family of sports figures. The four students profiled here represent a sample of Paly athletes for whom a particular sport has been a way of life.

The youngest of four children, junior Kevin Cullen has  always had football in his life as it always had a place in his family. He himself has been playing football since the age of six.

“My entire family revolves around football in some way or another,” Cullen said.

Cullen’s father played football throughout his life. One of his brothers played at the collegiate level and the other played during his high school career. His sister was also competitive cheerleader and also cheered for Paly’s football team. Cullen’s mother was a long jumper and cross country athlete throughout her high school career. Now, his mother is a loyal attendee at his games. She takes photographs and previously acted as the team mom, which included sending out emails with information about games, collecting money for the fees and coordinating with other coaches. Cullen feels that football has really brought his family together, with them being an essential source of support behind him.

“It brings us all together over a common interest, and they are always extremely supportive,” Cullen said. “Sunday Night Football is practically a weekly holiday in my family, as we all come together and watch the sport we all love.”

For Cullen, playing football did not feel forced upon him by his older siblings. Instead, their participation inspired him to get into the sport for himself; he wanted to be a part of what he had heard such great things about.

“I think my family had a huge role in my decision to play football. I always heard amazing stories from them about their experiences with the game and we were always watching games at home. The entire atmosphere of the sport and the way they presented it to me convinced me from a very early age to play.”

Because of the heavy emphasis on sports surrounding him from a young age, Cullen occasionally feels pressured by the achievements of the rest of his family.

“The only problems I have faced is that there are high expectations for me with the sport,” Cullen said. “The bar [is set] pretty high in regards to my playing standards.”

Rather than intimidate Cullen, this pressure has only made his love for the sport grow more, ultimately  inspiring him to play in college as well.

“Sports mean everything to me,” Cullen said. “They have shaped the majority of my character and made me the person I am today. They additionally have shaped a lot of our family dynamic. Knowing that my family is always in the stands cheering me on is something that always reassures and motivates me.”

Senior Jackson Chryst feels that, even with his family’s involvement in athletics, his decision to go into football was his own.

For Chryst, the decision to go into sports was a very natural path, and not one that he had to put too much thinking into.

Though Chryst’s family had gotten into football before him, he felt that, ultimately, he fell in love with the sport on his own and for his own reasons.

“The companionship you get from playing football (drew me into playing the sport),” Chryst said. “A lot of the relationships that you’ve built throughout playing the sport… I think that was really one of the reasons I was drawn to it (for myself) as much as my family’s part of it.”

According to Chryst, there was no pressure from his family or any overwhelming expectations that they wanted him to achieve.

Chryst’s older brother, Keller Chryst, played Division I Football at Stanford University and Tennessee University,  his father Geep Chryst has coached in the National Football League (NFL) for decades, and his uncle Paul Chryst is the current head coach for the University of Wisconsin Badger football team. Yet, if Jackson ever wanted help, he has to proactively approach his family first.

“I think it helps to have my dad around, because he knows a lot about football and he doesn’t pressure me,” Chryst said. “I have to come to him first to get his advice. It’s never him pushing it on me. He wanted me to love the sport before he could really push me with anything.”

Sophomore Hailey Hwang and her two siblings grew up playing soccer as their only sport until she started track and cross country this year. Her father played soccer growing up, and now plays in an adult league. Her mother played sports such as basketball, field hockey and tennis in high school. Hwang started playing soccer with the influence and guidance of her older sister, Campanile Board Correspondent and senior Sam Hwang, and the encouragement of her parents.

“I started soccer when my older sister decided she wanted to try it,” Hwang said. “My parents decided to sign me up too, and I instantly fell in love with the game. My family has definitely encouraged me to play soccer and continue to play regardless of the level of play.”

Because they started playing around the same time, sibling competition seem to arise at times, especially as they both rose to the Paly varsity soccer team. Mostly, however, as a common interest within the family, soccer gave them something to bond over.

“I think (soccer) has caused some competition,” Hwang said. “But overall, it’s really nice to have siblings to practice with and cheer for teams with for the World Cup.”

Hwang and her siblings’ mutual love for soccer allowed them to grow closer.

“Sports have been a part of every day conversation in my family growing up,” Hwang said. “I was never expected to be good at sports, but I was encouraged to try new sports.”

A majority of junior Chloe Japic’s life has involved soccer, as she has played the sport the age of two. Her two younger sisters, a freshman and a fifth grader, both play soccer at the same club team. Additionally, her father played basketball in college at San Francisco State University and now plays golf regularly. Since all of the children of the family share a common sport, Japic cites this as an opportunity to learn from one another and make each other better players.

“The good thing about all of us playing the same sport is that we can learn from each other and practice together,” Japic said. “My sister and I are very competitive, so she makes a great player to train with because I know she will work hard.

This advice can sometimes become a bit much, as overwhelming expectations arise.

“[The pressure our parents put on us to perform well] stresses our relationship a lot, but at the end of the day I know they just want the best for me and they want to see me accomplish my goals.”

According to Japic, the incorporation of sports in her family has caused it to become stronger and gives them a common ground to all understand one another.

“Sports has both brought us closer together and caused some tension in the family. I never expected to be good at any sport growing up because of my family. I always believe it’s the work that the individual puts that determines how good they become.”

Even though these individuals are often grouped in with the rest of their families, they have all made their own names for themselves. No matter how each got into their respective sports, they have found their own drive and love for each of their sports along the way.