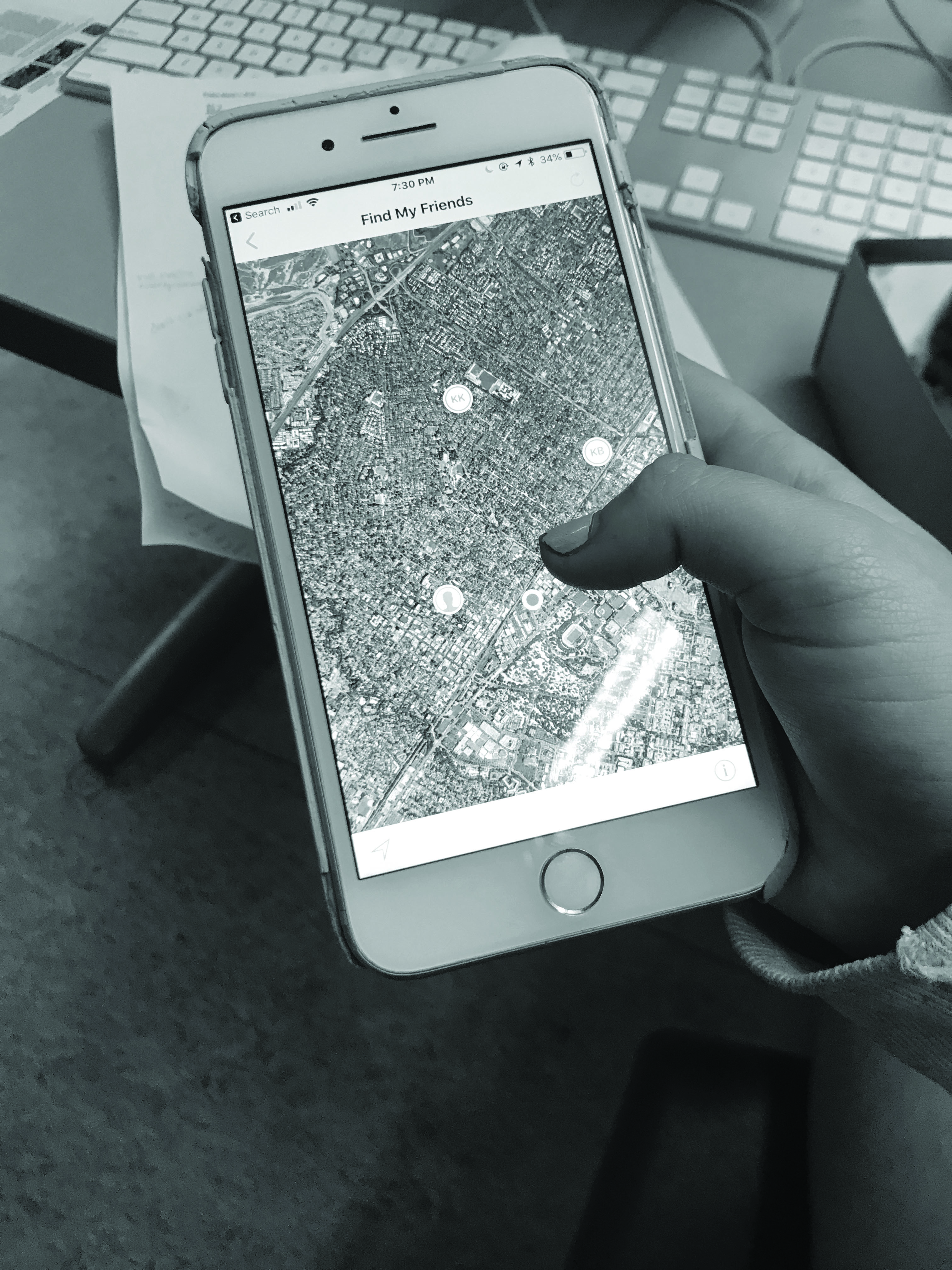 <strong>As junior Emma Siskens walks downtown with her friends on a Friday night, she hears a buzz and looks down at her phone. It’s a text message from her mom. It reads, “What are you up to downtown?” She looks up, knowing her mom is looking at her location through Find My Friends.

Siskens is one of many teens in Palo Alto whose parents track their location with apps such as Find My Friends, Google Maps and Life 360.

Apps and digital software now allow parents near and far to see where their kids are, what they are doing and who they are with at all times.

Junior Sofie Vogel’s parents do not track her, and she said she would feel uneasy with someone knowing and being able to see her location at any time.

“I feel that I would rather not have my parents track me just because the thought of someone knowing where I am all the time just feels weird,” Vogel said.

Although Vogel has not had a conversation with her parents about tracking, she said she understands why some parents feel the need to track their kids.

“If the kid never tells their parents where they’re going, I would understand why the parent might want to track them for their own safety.”

Some students’ parents track them for safety reasons. However, many students aren’t comfortable with this — the idea of someone looking at their location at every moment may feel invasive.

Junior Virginia Thayer, whose parents track her through Find My Friends when she goes out at night, said while she understands her parents reasoning for tracking her, it can be hard and difficult at times.

“I always say where I’m going, so when they are persistent about having my tracking on I feel like they don’t believe me,” Thayer said.

Other Paly students have similar reactions to the idea of their parents tracking them.

In their eyes, the term “tracking” feels like a violation of trust and respect. Siskens’ parents track her through Find My Friends, and despite understanding why they do it, sharing her location can seem unnecessary.

“They’ll text me like, ‘what are you doing here’ or whatever. If they would just ask me where I am, I would tell them. They don’t need to track (me).”

However, many students’ parents don’t use tracking as a way of finding out where their kids are. Vogel simply tells her parents where she plans on going before leaving.

With the access of cars and other transportation methods, it is easy for teenagers and their friends to travel without notifying their parents.

This is one of the many reasons parents feel as though tracking devices are important.

According to parent Karina Longinidis, she tracks her daughter, a junior at Paly, as a way of checking up on her, to know if she has made it to her final destination.

“It’s about safety (and) being able to know where she is especially if I can’t get ahold of her,” Longinidis said.

These parents agree that tracking is used only for safety.

“I believe in trust,” Longinidis said. “As long as the trust is not broken, the doors are open to a certain extent.”

While some may argue parents in the 21st century are more protective or invasive than ever before, their access to more devices that can provide information allowing them to more intel than ever before.

Today, users of technology have more access to what some may deem as ‘intrusive apps.’

Thayer said, “I don’t think my parents are overprotective because even though they track me, they only really use it in emergencies.”