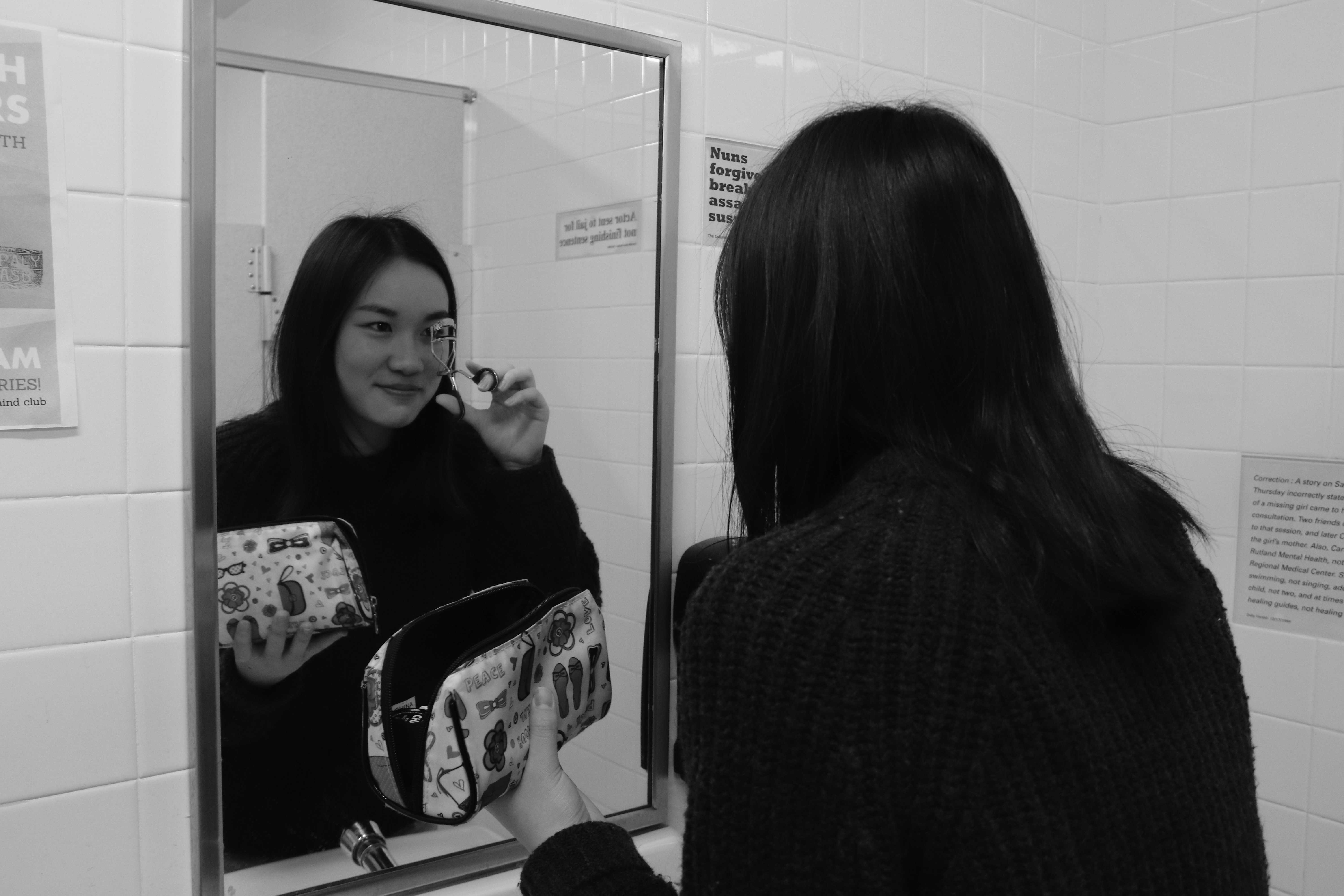 As beauty and cosmetics have rapidly expanded over the last decade into a multi-billion dollar behemoth of an industry, public scrutiny over the ingredients inside these products has simultaneously increased.

The constant application of makeup results in the user’s skin being consistently exposed to and often affected by the product, causing many consumers to become more conscious of the components inside their makeup.

“After I became vegan, I realized that I wanted my cosmetics to also be vegan. I started looking into ingredients and found out that so many products have highly questionable ingredients.”

Gibson has since switched to organic products after discovering a myriad of alarming additives in those she previously used.

“One thing to look out for is perfume, because that’s in almost every product,” Gibson said. “Also, lead is in a lot of makeup, despite the risk of lead poisoning.”

“I developed horrible allergies and reactions to makeup and skincare products years ago,” Szebert said. “Now I only use only organic products and buy from companies that I trust. It’s definitely not foolproof, but all of my allergies have gone away, so I believe that I’m doing something right.”

Concern for health risks due to harmful additives in cosmetics has prompted the rise of “clean” brands, promoting safer alternatives by replacing them with organic ingredients.

Sephora recently launched a Clean Beauty category, where brands are featured with a “Clean at Sephora” seal, indicating that their cosmetics are free of the sulfates SLS and SLES, parabens, formaldehydes, formaldehyde-releasing agents, phthalates, mineral oil, triclosan and others.

Despite the spike in ingredient awareness and demand for “cleaner” beauty, the actual definition of organic makeup remains vague to the general public, according to Valley Fair Sephora Senior Skincare Advisor Jen, who has a background in organic chemistry. Jen was not permitted by Sephora to give her full name.

“The problem with the word ‘clean’ is not everyone has the same idea of what clean is,” Jen said. “It’s not a definitive term.”

According to Jen, there is no agency or governing body regulating “organic” terms, nor is there an established definition for them in cosmetic labeling. The U.S. Department of Agriculture (USDA), which regulates food, does moniter the agricultural ingredients in beauty products according to USDA organic standards, but popular marketing claims such as “natural,” “green” or “clean” are not federally defined or monitored.

Whether beauty products labeled as clean are actually healthier and safer is also an ongoing debate. According to Szebert, proving causation between chemicals applied on the skin and adverse effects is difficult due to the inability to control either variable.

Long term makeup usage sometimes irritate and cause inflammation to the skin. Wearers can develop acne due to comedone formation, which is when dead skin cells create a blockage in pores. Mineral oil, made from petroleum, is a comedogenic ingredient common in several cosmetics and can form a physical barrier over the skin, trapping bacteria and increasing risk of breakouts.

The most common reaction to makeup is irritant dermatitis, especially among those with sensitive skin or skin disorders such as eczema and rosacea, which causes rashes and sometimes even blisters. However, the elimination of certain ingredients does not necessarily eradicate these effects, as there are numerous factors that can contribute to them.

Though fragrances and preservatives are the most prevalent causes of contact allergy, natural cosmetics can still induce the same symptoms. The Food and Drug Association (FDA) states that since all cosmetics have the same requirements for safety regardless of their source, organic products are not necessarily safer.

Skeptics of the organic cosmetics movement state that the issue is not necessarily the chemicals themselves but rather the quantity, since makeup is not the only means of exposure to several allegedly dangerous ingredients.

“With most of these ingredients, there are only issues and dangers when there’s too high of a concentration,” Jen said. “A lot of them are used in very low amounts, and you’re constantly exposed to them by food and air.”

Although most cosmetics do contain chemicals that have been shown to be dangerous, they are usually found in extremely low amounts. Over 99 percent of the cosmetic lip products and externally applied cosmetics on the U.S. market contain levels of lead below 10 ppm. However, since exposure to lead from makeup occurs mainly through incidental ingestion and skin absorption, the FDA has found the amount so miniscule that it cannot be measured in routine blood testing, and is therefore low risk.

“It also depends on your skin. Sometimes certain ingredients, like fragrance, can irritate some people more than others simply because their skin is more sensitive.”

Certain ingredients in particular have been a point of contention among consumers, including parabens. Intense media scrutiny arose after a 2004 study conducted by Dr. Philippa Darbre of the University of Reading in England that detected traces of five parabens in the breast tumors of 19 out of 20 women.

Parabens mimic estrogen and bind to estrogen receptors, causing expression of genes change and communication within cells to be altered. A 2015 study lead by Dale Leitman, a gynecologist and molecular biologist at UC Berkeley, found that they were able to trigger estrogen receptors by turning on genes that caused breast cancer cells to proliferate.

Despite these claims, many believe that parabens’ estrogenic activity is too weak to cause harm. The American Cancer Society website states that “there are no clear health risks from parabens in food, drugs, cosmetics, and skin care products.” In addition, some argue that parabens and similar chemicals are essential in cosmetics as powerful preservatives.

“Parabens and triclosan are meant to prevent harmful bacteria and mold,” Jen said. “So even when products don’t contain them, they still have to have some kind of preservative.”

Although the mechanism behind parabens’ antibacterial action is still being investigated, studies suggest that it is linked to the membrane, causing some to believe that they disrupt bacterial membrane transport processes, leaking intracellular fragments.

Another common preservatives are formaldehyde releasers, which are chemicals that emit a naturally occuring gas called formaldehydes. Although it also has been linked with some types of cancer, it is usually used in concentrations far below what is considered hazardous.

Preservatives generally target a single type of microorganisms; for example, parabens are most effective at yeast and molds while formaldehydes target bacteria. As a result, a mixture is used to ensure that a broad spectrum of antimicrobial activity exists.

Other controversial additives include phthalates, a family of industrial chemicals typically used as a solvent and fixator in makeup. Broadly classified as an endocrine disruptor, rodent studies have shown adverse effects specifically to the male reproductive system and sperm production. Despite this, they were concluded to be safe in cosmetics by the National Toxicology Program (NTP) and Cosmetic Ingredient Review (CIR). As a result, critics of clean beauty believe that these chemicals are not risky in makeup.

“I’m not scared of any of them,” Jen said. “The thing is, all ingredients in products are regulated to ensure that they are safe for the public. Many of these have been in cosmetics for many years and are regularly checked.”

Although cosmetic products and ingredients, except for color additives, are not required by law to be approved by the FDA before entering the market, the FDA can request, not order, product recalls if they suspect that the product is contaminated or misbranded. Companies are legally required to determine that their ingredients are safe and correctly labelled, but, according to Szebert, despite this, cosmetic brands are not obligated to mention ingredients that are present in low amounts.

“The problem is that a lot of chemicals put in makeup are not even required to be included in the ingredients list if they’re below a certain quantity. Most inexpensive makeup is full of what I’d consider ‘toxic’ chemicals that are used as filler.”

The appeal of organic brands also extends past health risks. Despite believing that most supposedly hazardous ingredients are not in fact harmful, Jen notes their negative environmental impact.

“I’m more concerned about how some of these, like microbeads and triclosan, effect the environment,” Jen said.

Studies have found that ingredients such as Dibutyl Phthalate (DBP), synthetic fragrances and silicones cause pollution in marine environments and are often toxic for many aquatic wildlife.

Although viewed as more eco-friendly, organic products replace synthetic preservatives with natural ones, which are mostly weak acids including salicylic acid, lactic acid and citric acid. As a result, they are less effective and must be used in higher dosages, leading some to become quite allergenic.

While natural cosmetics may promote a more holistic lifestyle and be beneficial to some, the formulation of organic and non-organic cosmetics are still being researched and have yet to have been decisively determined superior or not. Therefore, when considering converting to either side, consumers should be aware of the risks and benefits of both markets.