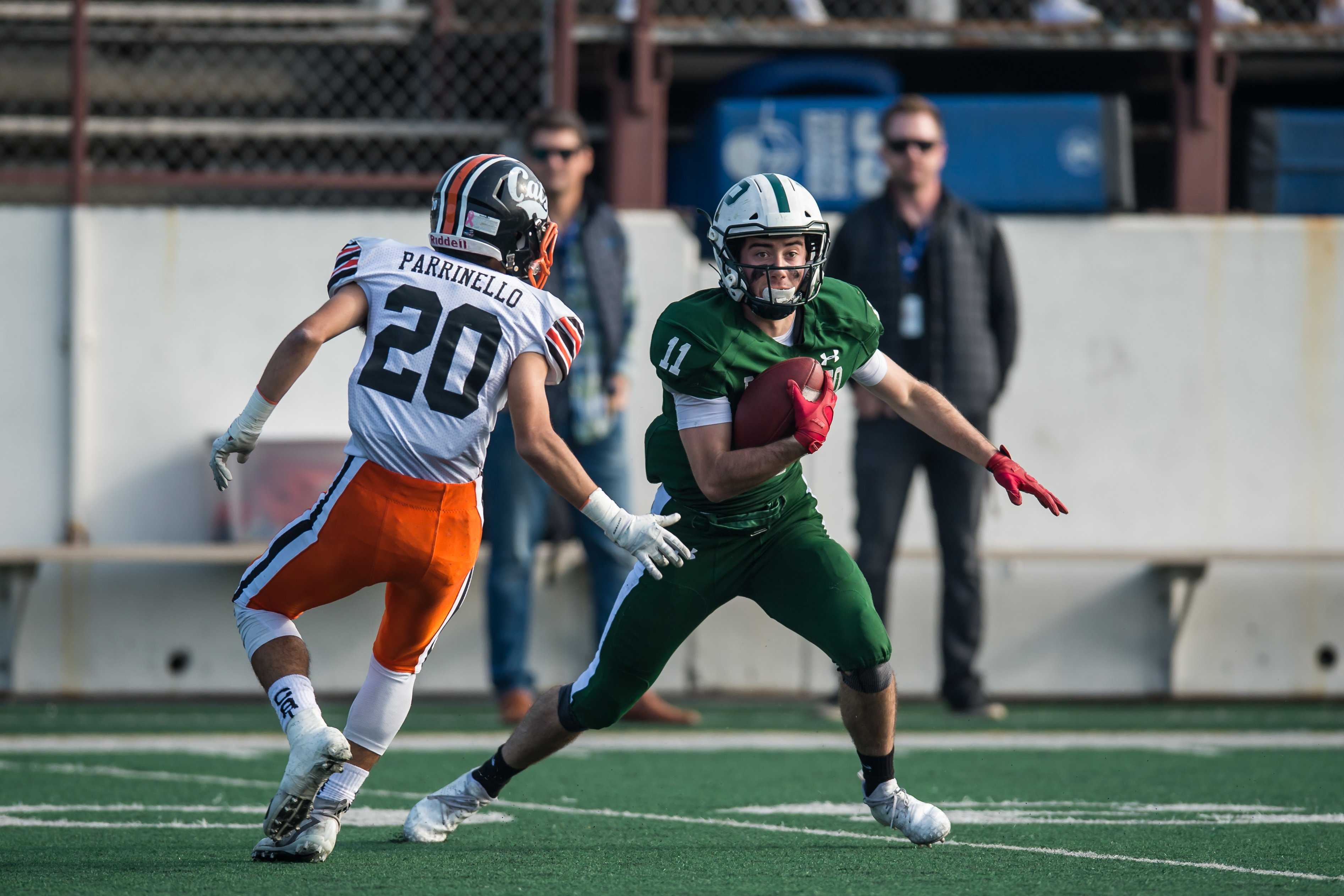 As senior wide receiver Paul Thie splits between two Los Gatos High School defensive backs, he uses his explosive speed to score a 60 yard touchdown and lead his team to a spot in the Division One Central Coast Section (CCS) playoffs.

Thie, along with several other members of the Paly football team, earned a spot in the football All-League First Team for the Santa Clara Valley Athletic League (SCVAL).

Each All-League team is a fantasy roster comprised of the best players at each position during the season.

All-League athletes are voted on by the coaches of each team in the SCVAL at the end of the season.

Every coach, having taken notice of the best athletes in the league, decides who is worthy of the All-League distinction.

The football team had a great season, making it to the CCS semi-finals before losing a hard fought battle to Menlo Atherton High School.

“We had the talent to go all the way,” Thie said. “With a mix of things — bad calls, bad luck — we finally got beat. Regardless, it was a great season.”

Despite relying heavily on the running game in past years, the football team was more balanced this year in terms of running and passing the ball.

Thie recorded a staggering 923 yards in 48 receptions, resulting in 10 touchdowns over the course of the season.

“It means a lot to have all my hard work since freshman year pay off, especially all of the weightroom and off-season training that we did.”

While the All-League title represents Thie’s athletic prowess, he sees it as a reflection of more than just his capabilities on the football field. He credits his success to the balance of skill and help from his teammates and coaches.

“The coaches did a great job putting us in a good position to win everytime we stepped out onto that football field,” Thie said. “The work I put in was supplemented by the help of my coaches and teammates to bring the best out of me, and that’s what really got me the award.”

When he became a member of the Paly football team, Thie set humble goals for himself, and managed to achieve far beyond what he believed possible at the time.

“My goal when I started playing football freshman year was to just go out and enjoy myself,” Thie said. “Looking back on that I feel like I have not only done that, but accomplished even more as I developed a passion for the game and the determination to get better with every minute I spend playing.”

The team finished in fourth place at the NorCal Championship but failed to advance to the State Championship.

“Being a sophomore and making first team All-League is something pretty cool because I know that there are so many other great golfers out there and doing it as a sophomore makes it even more special.”

Pineda, despite earning the award for her regular season performance, believes that her postseason playing was her most dominant display of golf this season.

“My favorite moment this season was at (league championships) because I shot one under for the first time during 18 holes,” Pineda said. “I was super excited especially because it was a time that I could help the team out and it was not just for myself.”

Like Thie, Pineda credits much of her individual prowess and the team’s success to her coach.

According to Pineda, Doyle Knight, the girls golf coach, knows exactly how to bring the best out of every player on his team.

“Knight is a great coach and realizes what we need to practice from watching us during our matches,” Pineda said. “He tells us how we could improve our game in order to do better next time.”

Pineda’s work does not end when the school season is over. In the offseason, Pineda trains with her parents, who work with her to achieve her goals as a golfer.

“My parents are my coaches outside of school and they really push me hard because they want me to be the best player that I can be,” Pineda said. “My main goal is to play Division I golf in college. I would love to get recruited and play for a golf team in college.”

The girls volleyball team was yet another triumphant Paly athletics team during the Fall season. After winning league, the team went to the CCS Open Division, the highest level of competition in high school athletics.

After managing to upset multiple highly seeded private school teams, including Saint Francis High School, the team finished in third place, qualifying it for the NorCal Championships, where it faced off against the seven best teams in NorCal to determine which team would play in the State Championship. The season ended after a loss to Buchanan High School.

“In the end, the team did amazing,” sophomore All-League player Kylie Mies said. “We qualified for the Open Division which no Paly volleyball team has ever done before.”

Mies also made a name for herself as an underclassman playing varsity athletics, impressing coaches across the league enough to earn a spot on the All-League team for girls volleyball.

“Getting All-League my sophomore year means so much to me,” Mies said. “It shows that my hard work has been acknowledged by others and I feel proud that I get to have the title.”

Echoing the same humble sentiment as Thie and Pineda, Mies credits everyone around her for her success.

“The coaches have really helped me develop into a player who is on the court all the time,” Mies said. “I am so grateful to be surrounded by great teammates and coaches.”

Mies hopes that she can continue her great form and keep the girls volleyball program competitive through her contributions to the team.

“I hope that we continue to dominate our division and stay tight as a team,” Mies said. “Individually I would like to continue training and getting better and eventually follow through on my plans of getting recruited by a university.”