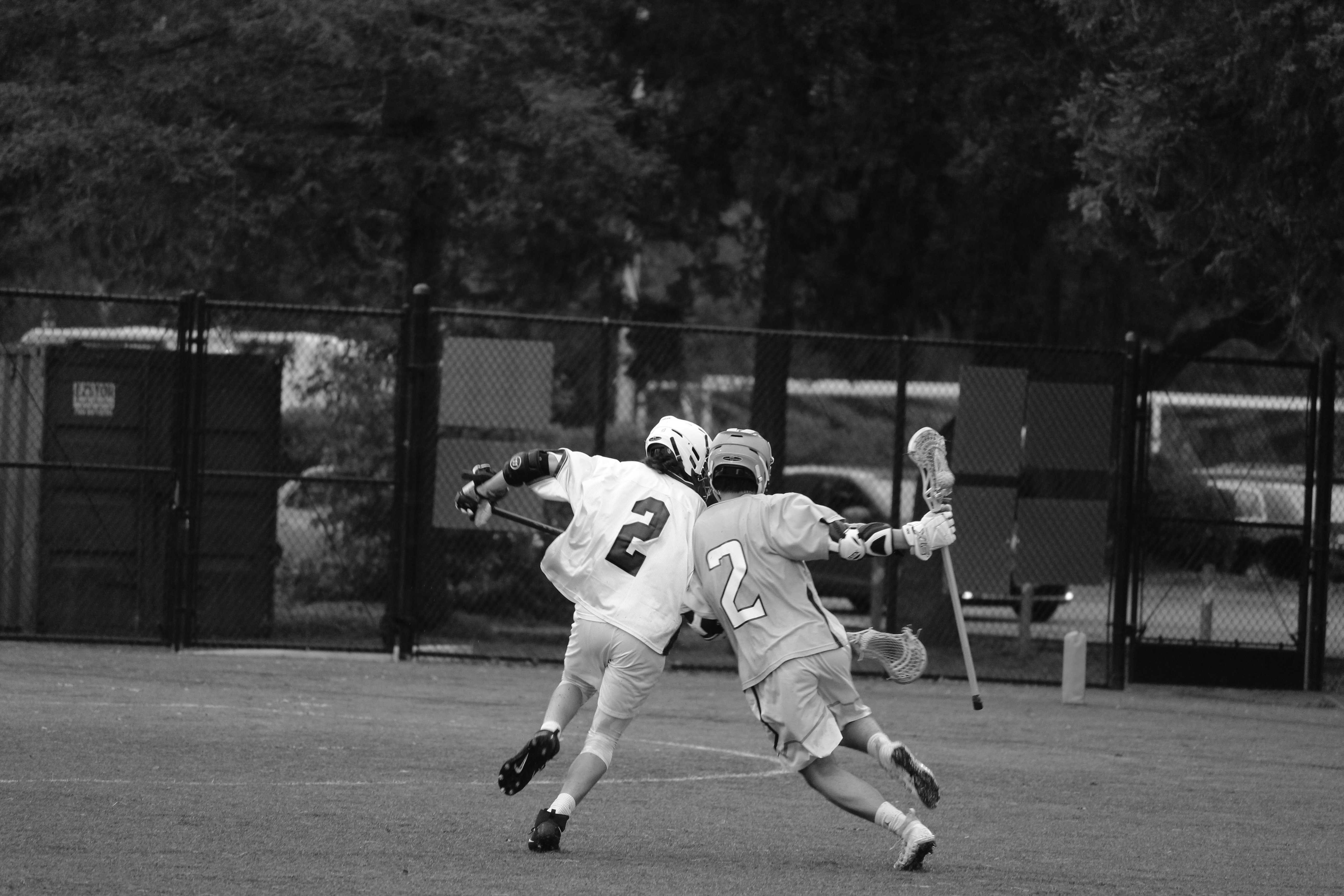 Sprinting down the field, boys junior varsity lacrosse player Quintin Dwight checks his opponent to the ground, ferociously competing with a level of aggression comparable to hockey or football.

Though they share the same name, boys and girls lacrosse are almost entirely different sports, aside from the objective of the game — scoring as many points as possible in the allotted time.

According to senior girls varsity player Sydney Schwan, the main differences between the two are the set of rules, balls, safety equipment, sticks and field setup.

Schwan said the biggest difference between the two is the level of aggression used during a game. The draw is at the start of every quarter and after every goal, two players place their sticks together with a ball in between, and fight for it after.

“The draw for girls is no contact, and we start standing up,” Schwan said. “Whereas the boys start they face off on the ground and they wrestle for the ball.”

For boys lacrosse, it is called a face off and is when two players get on their knees and there is a ball on the 50 yard line with a ball between their sticks

“I would say that the full contact aspect of boys lacrosse is a major difference between the two.”

In addition, there is a lot of starting and stopping in girls lacrosse, according to boys varsity lacrosse coach DJ Shelton.

“(In girls lacrosse), the referees can stop the game when they want based on a minor infraction,” Shelton said. “But boys lacrosse doesn’t have that — it’s a lot more free form, and if a penalty is thrown, the play continues until the ball is out of bounds or the play comes to a natural stoppage.”

According to Dwight, there are 10 people on the boys lacrosse field. Three defenders, three midfielders, three attackers and a goalie.

“Each team is only allowed to have six people on a given side of the field at a time, either attacking or defending,” Dwight said. “Gameplay is fast and physical, so padding from the chest up is used along with a helmet. However, the goal of hitting is different than football, as the rules are more strict and sometimes going for big hits is not optimal for helping your team.”

Recently, the state of Florida has started requiring all women youth lacrosse players to wear helmets, the only state to enforce such a rule.

Shelton said that some believe that this rule may have a large effect on the way girls lacrosse is played.

“This created a lot of controversy because people thought that if you gave players more protection, then they are going to start playing more dangerously.” DJ Shelton

According to Shelton, some people may think boys lacrosse is more difficult than girls, which Shelton disagrees with, saying the two are too different to compare.

“Girls lacrosse in some ways is much more difficult than boys lacrosse,” Shelton said. “They don’t have pockets in their sticks so the ball falls out much easier and they aren’t wearing pads. By no means is it lesser of a sport, is just very different and it’s very interesting that the rules have developed into something almost entirely different.”

“Overplaying someone and losing your ground can result in a shot on goal from the opposition, so defense is more about positioning and footwork (than checking),” Dwight said. “As for rules, stick checking and hitting has to be below the head and not overly aggressive, such as winding up or a running start.”

In addition to these differences, Dwight said he has noticed a stigma surrounding girls lacrosse.

“I think some people may look down on girls lacrosse because there is almost no physicality, calling it ‘not a real sport’ or whatever,” Dwight said. “In that sense, it has a negative connotation because people are used to boys lacrosse where there is a lot of hitting and stick checking.”

Schwan has also noticed this negative reputation around girls lacrosse.

“Sometimes the boys team talks about girls lacrosse,” Schwan said. “They’ll make fun of us because we can’t hit people.”

Shelton said that because of these differences and other “odd” rules that don’t align with the men’s game, he finds girls lacrosse to be a misogynistic interpretation of boys lacrosse.

According to Shelton, some of the more obscure rules have begun to be phased out, as the sport develops and becomes more “modern” in relation to the men’s game.

“I’m not super well acquainted with the history of girls lacrosse,” Shelton said. “It appears to me that it is a somewhat misogynistic interpretation of boys lacrosse.”

“If I could snap my fingers, they would be the same sport,” Shelton said. “I don’t think it’s fair to separate people based on old archaic versions or perceptions of athleticism.”