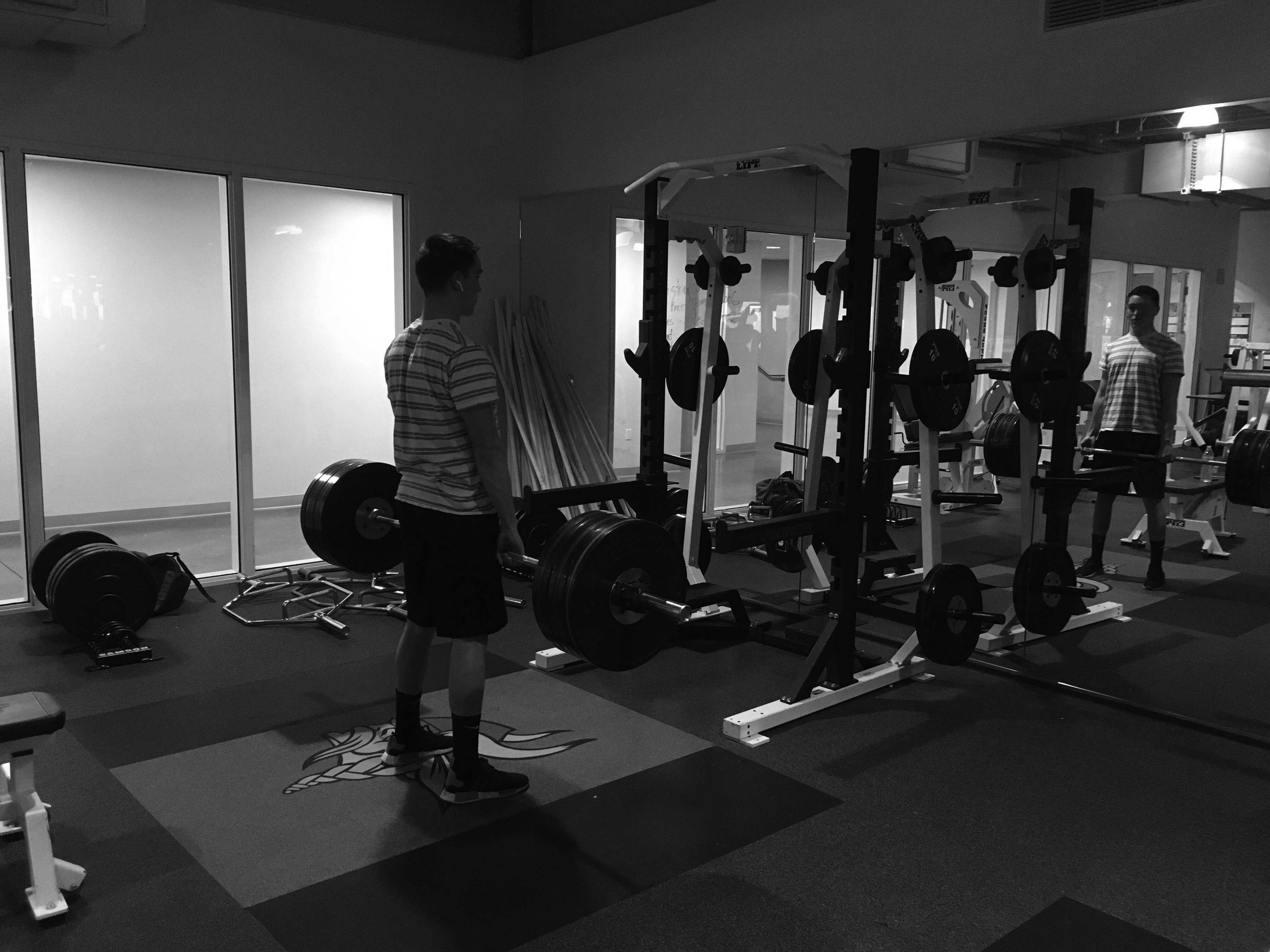 Since time immemorial, humans have pondered the purpose of existence and the meaning of life. The answers to our existential questions have long seemed like the carrot at the end of a stick, forever teasing us with endless recession. But in reality, the answer has been staring us in the face all along. It’s simply to “get big.”

That’s probably what senior Ryan Strathearn, who spends much of his time in the weightroom, would tell you.

“There’s nothing more rewarding than getting a good lift in and leaving feeling bigger than you did when you came in.”

In all seriousness, weightlifting is an incredibly popular form of exercise that has a very competitive culture.

Whether people are competing with themselves to beat their personal records (PRs) or with others to see who can lift more weight, the weight room is always an intense arena full of competition.

“Whenever someone is going for a PR, we all like to crowd around them so that we can celebrate with them if they succeed and encourage them if they don’t,” Strathearn said. “But if we’re competing for the highest weight, it’s much more of an ‘every man for himself’ mentality.”

This competitiveness manifested itself in the form of powerlifting, a sport that began in the U.S. in the 1950’s but has seen a recent growth in popularity.

Powerlifting is comprised of three “movements,” — the squat, the deadlift and the bench press. Together, these three movements test the strength of the entire body.

With the added support, equipped powerlifters can lift greater weights. The world record for equipped bench press, for example, is 1,075 pounds, over 300 pounds higher than the record for unequipped.

The other world records for equipped powerlifting, according to the International Powerlifting Federation (IPF), are 1,268 pounds for squat, and 1,102 pounds for deadlift. In comparison, the average untrained male can only lift 100-150 pounds in all of these categories, according to LiveStrong, a health & fitness website.

Alex Bruskin is the president of the Northeastern Powerlifting Club, a group which focuses on equipped powerlifting. According to Bruskin, it requires more skill and technique than unequipped.

“We focus on equipped powerlifting because it adds another element to the sport,” Bruskin said. “Anybody can walk into a gym and learn to squat raw, but it takes time and dedication to master a geared lift. Equipment puts a stronger emphasis on the form of the lift and requires more than just brute strength.”

John Goodyear, another member of the Northeastern team, also favors equipped because of the unpredictability it adds to the competitions.

“While raw lifting requires about an 80-20 split between strength and technique, equipped powerlifting is closer to 50-50,” Goodyear said. “It requires more mental consideration, so meets become more interesting as the results are more unpredictable. With unequipped, it’s easy to predict the outcome because people will likely reproduce their PRs, but in equipped, someone could have a bad day or screw up on their technique and an underdog could end up coming in first place.”

Although equipped may be more interesting, unequipped or “raw” is the more popular of the two, according to Bruskin.

“As much as I hate to say it, I think geared powerlifters are a dying breed,” Bruskin said. “Raw lifting has been gaining more and more popularity every year. This is likely due to the accessibility of raw lifting vs equipped lifting. It’s difficult to find a gym and enough people to train as a geared powerlifter, but anybody with a gym membership can work towards competing in a raw competition.”

Despite the dwindling amount of geared powerlifters, Bruskin is still excited about the future of powerlifting as a whole.

“I hope to see the sport continue to grow and gain popularity, hopefully to the point where it will be considered for the Olympics.”

The Olympics already includes weightlifting, which may be easily conflated with powerlifting, but in reality they are two very distinct competitions, according to Giselle Castro, a writer for the fitness website Muscle & Fitness.

“Olympic weightlifting focuses on performing two ballistic overhead lifts with good technique known as the clean and jerk, and the snatch,” Castro wrote. “Powerlifting, on the other hand, is less technical and focuses on completing three, controlled, heavy lifts (the squat, bench press, and deadlift).”

While powerlifting stands in a long line of sports waiting to be recognized by the International Olympic Committee, Bruskin said it will continue to grow and help countless people in the meantime.

“Powerlifting is a great sport for people of all ages and walks of life,” Bruskin said. “It teaches dedication, humility and gives someone a sense of accomplishment when beating personal PRs.”