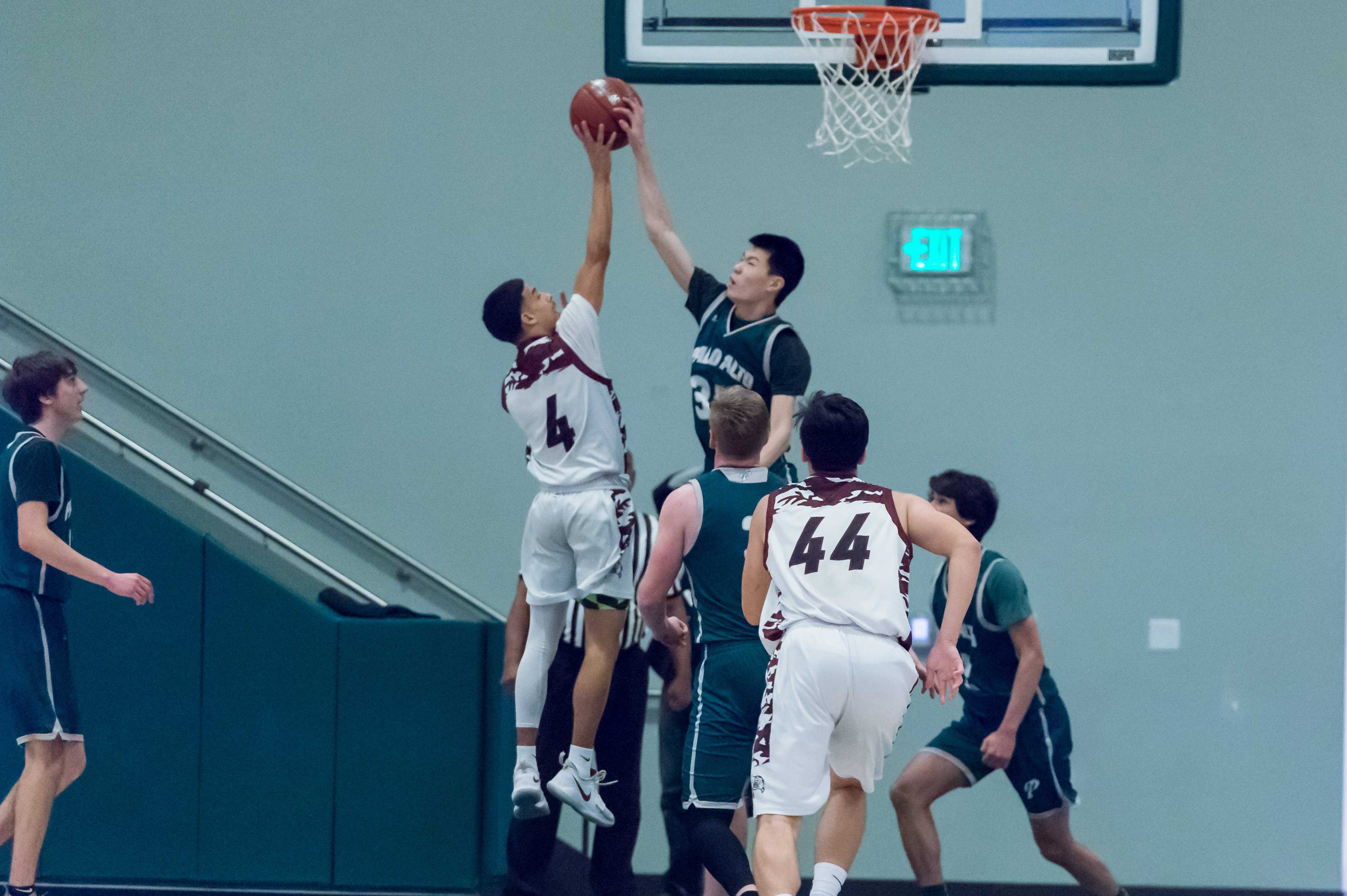 Varsity basketball player Marvin Zou loses control of the ball as he is double teamed by two opposing players. As all three of them rush to retrieve it, Zou, number 35,  gets there first and makes a move that leaves the opposing players far behind. He then glides to the basket for a layup, as the home crowd erupts.

Zou, a senior, went from getting limited minutes on the varsity team as a junior to becoming one of the team’s leading scorers as a senior, averaging 12.4 points per game.

Zou, who had eight senior teammates last season, said he realizes how important it is to create a positive environment for younger players.

“The seniors last year (were) super friendly and treated me respectfully, which is something I’ve tried to do this year with the new players on the team.” Senior Marvin Zou

The graduation of a large group of seniors last year left the team searching for new leaders, as the team only had five varsity players returning this season.

“None of us got playing time last year, so we definitely struggled at the beginning of the season,” Zou said.

Learning how to treat his teammates with kindness and respect was not the only thing Zou said he learned during his first season on varsity. He said he has also learned from them what it is like to be a player on varsity and used it to become a star player.

“Last year I was one of the younger players who was still learning how to play at the varsity level,” Zou said.

The big hole in the team left by the seniors opened the doors for new leaders to step up, one of whom was Zou. Though Zou is not the traditional vocal leader, he finds other ways to lead his teammates.  According to varsity coach Rodney Tention, Zou is quiet most of the game but leads by making the correct plays on the court.

“He leads by example; he is not vocal and that’s who is on the court.”

It was not hard for Zou to embrace this new role, as he said he feels last year’s experience helped him prepare to play more minutes per game. Zou credits the amount of playing time he is receiving for allowing him to get into a rhythm on the court.

“I think it has been fairly easy to adjust to having a bigger role,” Zou said. “This year I am getting a lot more playing time, so it is easier to get into a rhythm in the games, and I’ve had the opportunity to be a lot more aggressive with this larger role.”

Zou’s teammates say they have noticed his growth as a player and his value to the young team.

“His ability to anticipate what the other team’s offense does helps us mess up their offensive plays and close out games,” senior teammate Josh Wong said.

His defense is not the only aspect of his game that has improved. He has also taken his offense to a place where he can consistently score around 12 points every game.

“(Zou) has gotten more unguardable, his first step is quicker and he is stronger in the paint.”

Other players on the team say Zou is more motivated to perform at his highest level this season, as he has received more chances to make an impact.

“He’s more focused in the locker room this season because he knows he is going to play a lot,” junior teammate Matthew Marzano said. “You can tell he locks in physically and mentally.”

Going from limited minutes to becoming a star player comes with its challenges, though.

“Being a starter and getting heavy minutes is completely different from a bench role with limited minutes so the transition was definitely something I had to get used to,” Zou said. “I think experience is mainly what solved these problems. Over time they just start to go away.”

Zou continues to prove he’s adjusted to his new role with each game, as he has put up great numbers throughout the season, according to Tention. One factor that has helped Zou excel this year is his ability to play without being nervous.

“(Zou) is a very smart player, and his confidence has gone through the roof, because of his increased playing time,” Tention said.

Zou’s coaches and teammates say his transformation has been a big factor for this years Central Coast Section (CCS) winning season. One other element that has led the varsity team to a championship season is the chemistry they have built with each other throughout the season.

“As the season has progressed we have gotten more used to playing with each other, and are playing at a much higher level,” Zou said.

The way Zou has stepped up this season has allowed the varsity team to fulfill its goal of winning the CCS championship. Zou’s coach credits his improvement throughout the season for playing a big role in the team’s success.

Tention said, “Marvin has improved in every phase of the game, from his on-ball defense, his defensive rebounding, to his ability to anticipate when he can get steals.”