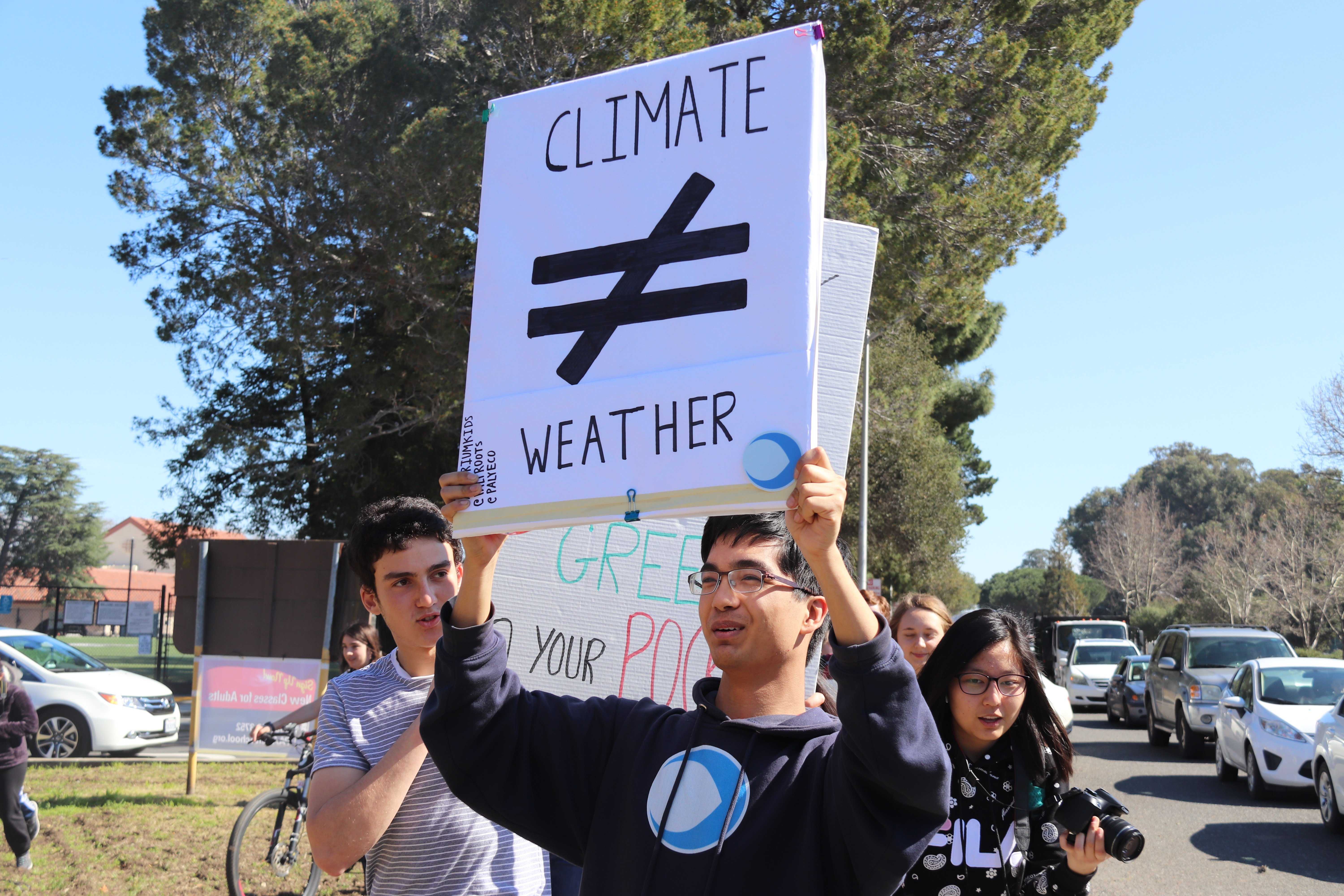 Dozens of Paly students joined thousands of youth activists from over 120 countries after school on March 15 to protest against government inaction on climate change issues. Gathering at the intersection of Embarcadero Road and El Camino Real, students carried rallying signs and posters to participate in what national organizers dubbed as the Youth Climate Strike.

With over 100 walkouts in the U.S. alone, the movement first gained traction last summer after 16-year-old Greta Thunberg began protesting outside the Swedish parliament during school hours. Inspired by her environmental activism, thousands of students began partaking in similar strikes, including Paly students.

As president of the Paly Democrats Club, which often coordinates student involvement with political issues, senior Warren Wagner organized the event with junior Rohin Ghosh, vice president of the club. Leading chants such as “no more coal, no more oil, keep your carbon in the soil,”  Wagner emphasized the vital role of youth as the driving force behind the climate change movement.

“I wanted to help generate some interest among Paly students to hopefully show them what they can do to help our planet. We kind of own this issue as young people since it’s going to be our life and our world going forward, so I think we’re the most important voice.”

Wagner, who was also involved in the organization of Paly’s protest against gun violence last year, reached out to Paly Environmental Clubs Organization (ECO), a coalition of environmentally-focused clubs, and Alex Von Feldt, the Executive Director of Grassroots Ecology, a local nonprofit, as guest speakers during the protest.

When addressing the crowd of student protestors on March 15, Feldt discussed the need for conservation and the Zero Waste Campaign, which “advocates for corporate responsibility for waste, government policies for resource conservation and sustainable jobs from discards,” according to its website.

Reverend Doctor Eileen Altman, an Associate Minister at First Congregational Church of Palo Alto, was also invited to offer a moral, faith-based perspective on climate change to the group.

“For me, the climate crisis is the greatest moral crisis facing the world today,” Altman said. “I think it’s important for students to participate because your moral urgency really will push political leaders to enact changes that are difficult for them to enact.”

According to junior Miles Breen, who attended the event, the main goal of the walkout was to prevent the movement from being disregarded as merely a sporadic smattering of discontent and instead showcase it as a global mass initiative.

“I don’t claim to be helping that much just by being here,” Breen said. “But coming out and showing that you support the Green New Deal or just any form of legislation that will help solve our problem with climate change is important.”

To encourage more individual action among communities, Lisa Altieri, founder of Community Climate Solutions and Climate Solutions Net, attended the rally to promote her new app, which educates users on different methods of contributing to the prevention of climate change in a collaborative and engaging way.

Currently, nearly 40 percent of U.S. carbon emissions are produced from household activities, according to Altieri, with electricity, heating, transportation, food and waste being the main categories. The app offers affordable and accessible alternatives and strategies that can lower negative impact up to 70 to 100 percent in each category.

“We’re working right now with 20 cities and counties in the U.S.,” Altieri said. “We’re working with high school students in every one of our communities, and they continually blow us away. It is inspiring, and it honestly keeps us going when we hear from students.”

Several Paly students who participated in the protest are continuing to advocate for climate change awareness. Altman urges others to follow their lead and reach out to different communities and organizations to promote the shift towards environmental betterment.

Altman said, “My message to Paly students is to find how your particular gifts can contribute to the movement, and look for people in your community that you can partner with to make change.”