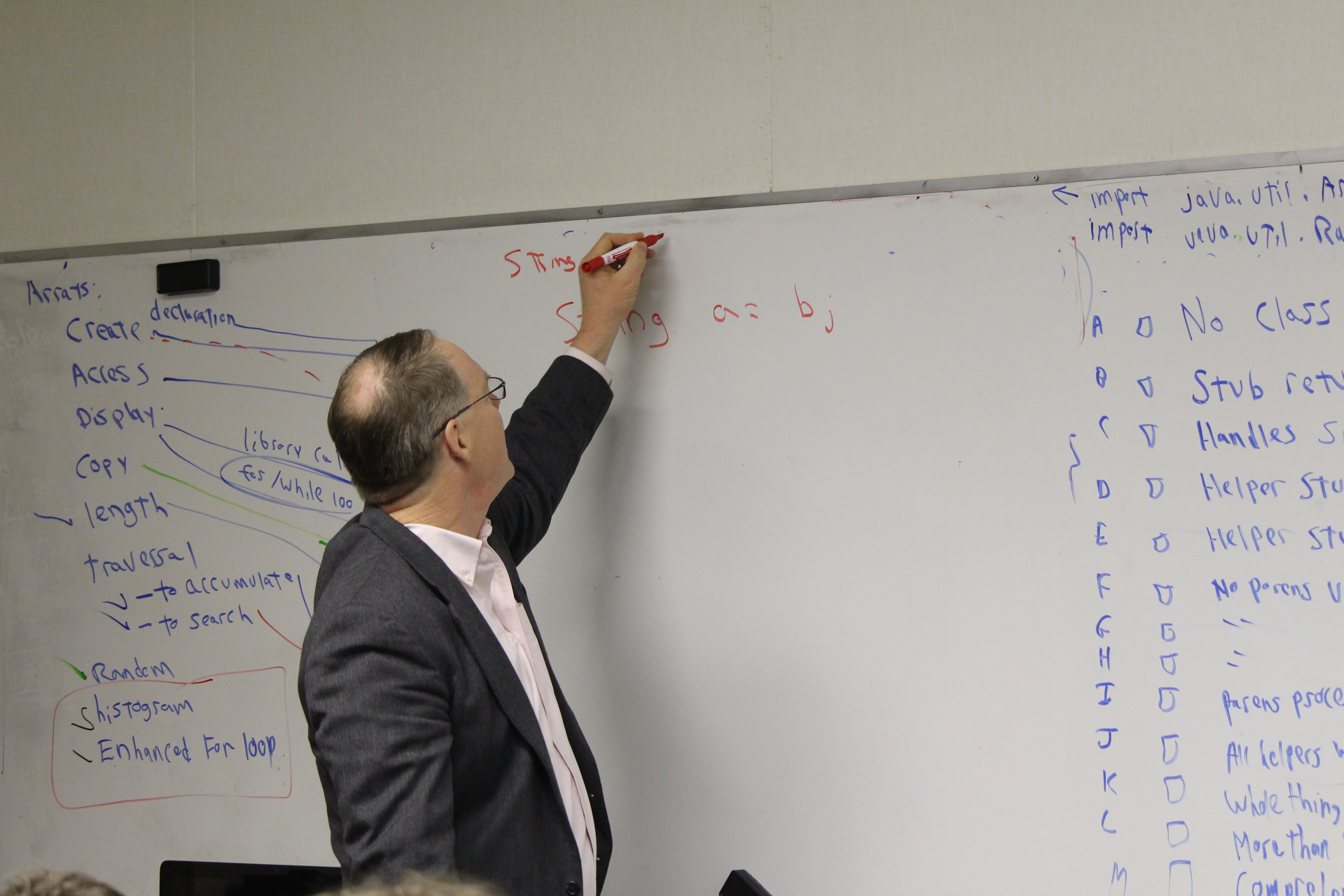 Computer science to be incorporated into Algebra 1, 1A curriculum next year

Starting next year, the Palo Alto Unified School District (PAUSD) will pilot an initiative to implement computer science (CS) curriculum into Algebra 1 and 1A courses. The integration of computer science into algebra classes will be done using the platform “Bootstrap: Algebra,” which focuses on the application of mathematical concepts in programming.

The Bootstrap platform is aligned with both California Common Core Math Standards and the national K-12 CS Framework, according to the recent Superintendent Board update announcing the decision to pilot the class.

Paly computer science teacher Christopher Kuszmaul has been supportive of using Bootstrap in class. He has been involved with the platform, created by Emmanuel Schanzer, for many years and has hosted a Bootstrap workshop at Paly.

“In 2012, I invited Emmanuel Schanzer, the founder of Bootstrap, to present his work at the Silicon Valley Computer Science Teachers Association. I have continued to support and advocate for that curriculum, including serving as the host teacher for the first summer Bootstrap workshop in California.”

The District was compelled to implement the Bootstrap platform, suggested by Kuszmaul, after research demonstrated the success of the program.

“Research about student progress due to the use of Bootstrap: Algebra indicates that students improve in their successful completion of algebraic word problems,” according to the Board update.

The research was mostly conducted at Brown University and was performed by Emmanuel Schanzer, Kathi Fisler and Shriram Krishnamurthi, the directors of Bootstrap. According to a research paper published by the directors, “integrating CS education with existing disciplines is appealing for both intellectual and logistical reasons. Effective integration helps advance student learning in both computing and the host discipline.”

According to the directors of Bootstrap, the program is unique because it delves deeper into aligning the problem-solving process across math and computer science.

Kuszmaul said he supports the Bootstrap platform and its implementation into Paly algebra classes.

“I am glad the District is finally taking my recommendation to employ this well thought out curriculum,” Kuszmaul said.

Junior Mitali Kessinger, who is currently taking computer science at Paly, said the District’s decision to integrate computer science into algebra is beneficial because it will introduce younger students to the subject of computer science, which can initially seem daunting.

“I think that many students are afraid of computer science, and personally, if my middle school didn’t require it, I might not have ever considered it. Adding a CS component to math gives kids the exposure to decide if the CS pathway appeals to them.”

According to Kessinger, computer science is beneficial in many ways, such as opening the door to potential career pathways and learning new ways to approach problem-solving.

“Computer science is prevalent in many careers, especially as the tech industry continues to gain momentum,” Kessinger said. “While not all jobs directly require coding, the foundation and understanding of code is critical for most. (I also) believe that CS teaches a problem-solving way of thinking that can be applied to countless jobs and life in general.”

Kessinger said her experience with computer science has taught her many skills beyond coding.

“My work ethic when things are challenging has gotten better, and I have a slightly different approach to (solving) problems in general,” Kessinger said.  “I also intend to major in CS or something related, so computer science has given me an academic purpose, so to speak.”

According to Kessinger, introducing computer science to more students through the District’s integration plan is a step in the right direction in increasing diversity in the field.

“I think it’s important to get a wider range of people in computer science, because it’s a very limited group of people currently,” Kessinger said. “There is not much racial diversity, and there are far less girls than guys, which ultimately translates to guys being in higher positions in the workforce.”

Kessinger said, “I ultimately believe CS should be mandatory and a separate class, but I think that this is progress and I’m glad that it’s being done.”