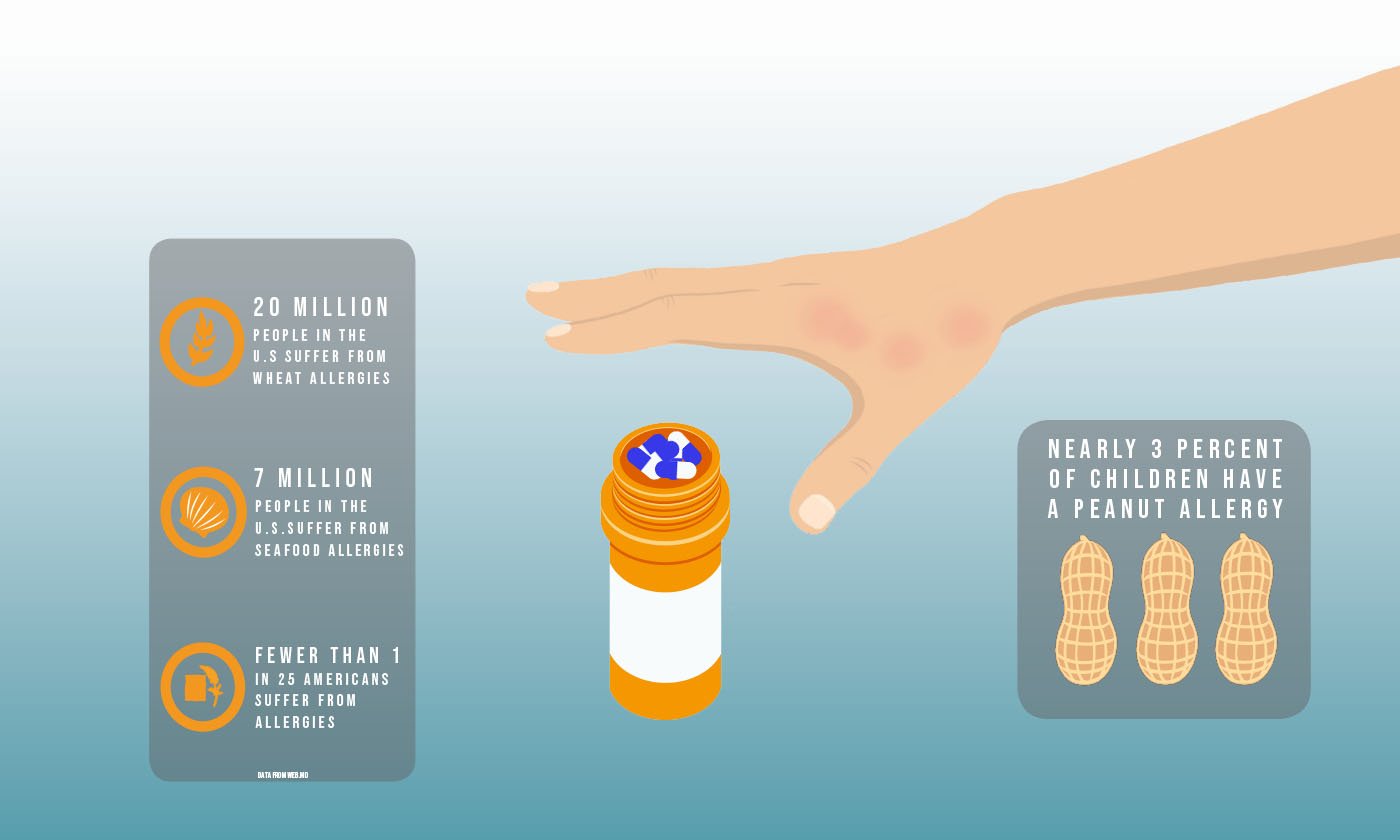 The Technicalities of Allergies

As the so-called “gluten-free” pasta arrives at the dinner table in a   downtown Palo Alto restaurant, sophomore Rachel Lysaght was eager to begin eating. Thinking the dish used a new brand of gluten free pasta since it tasted so good, she stuffed her mouth with the deliciousness. Soon after she finished the meal, Lysaght realized that the plate of pasta was purely composed of wheat. A couple of hours later, she was suffering from excruciating pains in her stomach due to a severe allergic reaction to the pasta.

An allergy is an overreaction of the immune system to a certain food, plant, or dust in a particular person’s body, which may cause life-threatening outcomes or potential external outbreaks.

According to Healthline, 54.6 percent of the U.S. population deal with allergies ranging from certain foods to severe outdoor sensitivity; Lysaght is not alone in her affliction.

While peanuts and treenuts are generally lifelong, some allergies including milk, eggs, wheat and soy are often outgrown over time. This may be because many children and adults become more exposed to the food continually.

This creates a small tolerance in the body that can increase over time the more interactions a person may have with whatever is causing their allergy.

In order to help relieve and combat symptoms of allergies, it is important to understand what is happening inside the body when an allergic reaction occurs.

Stanford Professor of Allergies and Immunology Sean Austin McGhee has been studying the effects of allergies as well as the immune system.

According to McGhee, an antibody in the immune system called Immunoglobulin E is created when the body becomes sensitive to something in the environment.

“The Immunoglobulin E coats the surface of specialized cells called mast cells in the skin and intestines. Once there, it sits and waits, sometimes for years, for that food or pollen to come along. When it binds to the food or pollen, that triggers the mast cell to make a bunch of chemical messengers that instruct your body to make the symptoms you associate with allergy.”

Not only do allergies affecting the human body cause physical reactions such as rashes and hives, but they also have a huge effect on the immune system.

“Allergies have their biggest effect on the immune system by biasing [it] to make more and different kinds of allergic responses in the future,” McGee said. “This is known as the allergic march, and describes how babies start with eczema, then develop food allergies, then asthma, then nasal allergies (hay fever). This is why it is important to control eczema in babies and children so that we can stop this process from starting in the first place.”

According to the Asthma and Allergy Foundation of America, some of the common outcomes of the allergic reactions include hives, fever, itchy skin, vomiting, difficulty breathing and possibly fainting.

Depending on the kind of allergies one may experience, the side effects will vary.

At Paly, there are a number of students who have allergies, whether it’s a serious allergy to eggs or peanut butter, or a mild one to pollen from neighboring trees in the springtime. Many allergies are very common around campus, and the reactions can be life-threatening to some.

Lysaght has been dealing with allergies for almost all her life due to the fact that she has Celiac disease, an immune disease where people cannot eat gluten because it may damage their small intestine.

“It started when I was about four years old,” Lysaght said. “I would always have these really intense stomach pains and my mom had no idea why. She took me to an allergist and I took this test to see if I was allergic to things like tree nuts, dairy and other stuff but they all came out as negative. That’s when the nurse who took the test recommended that I get a blood test and endoscopy to see if I had Celiac disease. Celiac disease is a test for your body treats gluten and wheat like it’s poison and so whenever I eat it, my body attacks itself pretty much which results in the really bad stomach pain.”

Whenever Lysaght consumes gluten by accident, she feels what she describes as knives stabbing into her stomach. In order to prevent her allergic reactions she avoids eating any gluten, as she even experiences stomach pains from certain oats such as barley. Paly sophomore Andie Tetzlaff suffers from nut and peanut allergies and experiences severe symptoms when she gets consumes them.

“I’m allergic to all tree nuts and peanuts and I found out that I was allergic to these foods when I was super young,” Tetzlaff said. “I ate something that had nuts and I started reacting to it and we ended up going to the hospital and that’s when they told my family that I had allergies to nuts.”

In addition to Tetzlaff, many other people experiences reactions when eating; nut allergies, in particular, are common.

“When I accidentally eat tree nuts or peanuts I have an allergic reaction,” Tetzlaff said. “My reactions are all similar and involve me having a stomach ache, an itchy throat that usually leads to me struggling to breathe, hives, nausea and sometimes vomiting. Reactions happen pretty often for me because I’m not very responsible with this stuff but I do carry an epipen with me most times and I have Benadryl for smaller reactions.”

Despite the difficulties that people with allergies have to navigate, the Paly nurse, Jennifer Kleckner, as well as the Paly health office is well equipped to help students with allergic reactions.

“Over the last 12 years I’ve worked for the school district, I have only had to give an Epipen injection four times. Most students who have an allergy try to watch what they are eating, but there can be surprises.”