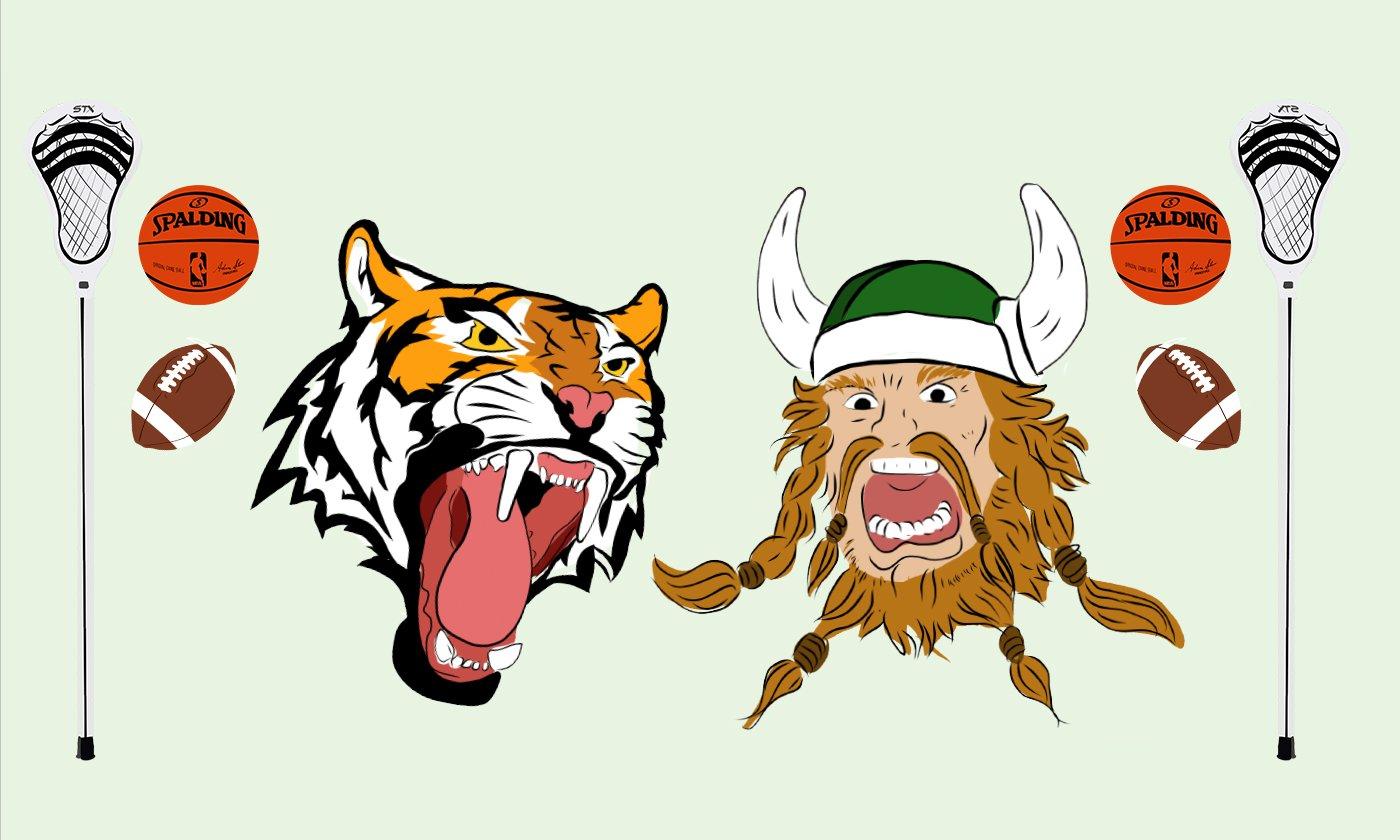 Clashing with the ‘Cats

Instead of the traditional roaring of both Paly and Los Gatos fans at sports games, the student section was desolate at the girls varsity lacrosse game on March 18. The bleachers will continue to be free of students for the rest of the athletic contests between the two schools in the 2019 school year.

The girls lacrosse game was the first athletic contest between the two schools that followed the newly established regulations of student admission. This game would serve as an initial test for attendance protocol for the rest of the school year.

The protocol comes as a result of a meeting between the administrations and athletic departments of both schools on March 6 to create a joint plan to encourage sportsmanship and safety.

The meeting was prompted by months of animosity between the two schools that culminated in over-the-top competitiveness and various jabs exchanged at a boys varsity basketball game between Palo Alto and Los Gatos on Feb. 1.

Conflicts that occurred during the varsity boys basketball game caused this decision. Unlike most sporting events, the boys basketball matchup was carefully planned to avoid conflicts amongst players and fans by both the Palo Alto and Los Gatos administration and athletic directors. However, the measures taken did not fully prevent quarrels from happening on the court and after the game.

According to Assistant Principal John Christiansen, the administrators and athletic directors also wanted to preface the game by reading the code of conduct. One varsity basketball player and one senior from each school stood before the student sections and shared the task of reading the code of conduct on behalf of their respective student bodies.

Yet despite their attempts, with nine minutes left in the fourth quarter, amid roaring crowds and twinkle fingers, junior Jamir Shepard set up to take a free throw when a student seated in the Los Gatos student section threw an Old Spice deodorant can at him. The can missed Shepard and landed on the court, but the gesture sparked conflict nonetheless.

“FLG” (F— Los Gatos)chants came from the Paly student section, middle fingers were thrown up by Paly students while exiting the gym and several fights took place around the parking lots after the game. According to Berkson and Christiansen, the Los Gatos administration found the student who threw the Old Spice can the night of the basketball game and have discplined the students for his actions.

“It didn’t feel good, but at the same time … it motivated me to work harder and win the game,” Shepard said.

Despite the brief interruption of play, the Vikings continued to put forth their best foot and ultimately defeated the Cats 62-50, scoring 27 points during the second half of the game.

“The game went well, we won,” Berkson said. “(The game) was fine until our kids were leaving and they did the ‘FLG’ thing, which is totally classless and embarrassing. The pre-game game plan (helped). I think we, (Los Gatos and Paly admin), did as good of a job as possible. We had 200 kids who we were suppose to get the out of a gym and home. With four or five administrators, that’s not an easy task. The fact that nothing big happened: I think that is a success.”

Students, parents and coaches alike have noticed the increasing administrative presence attending Paly vs. Los Gatos games as the rivalry has reached new levels of intensity and the consequences for students who take negative actions have risen.

“I just notice more administrators at the games (now),” Los Gatos girls varsity basketball coach Sarah Quilici said. “I think they’re just kind of ready for something to break out just in case; they’re more of a precautionary tale, not necessarily doing things differently just showing more of a presence.”

The feud between the two schools appears to have taken shape for the first time around three years ago during the lacrosse season, but has since become a school-wide rivalry involving almost every sport at Paly, according to varsity lacrosse and football player Kevin Cullen.

“Nobody started it,” Christiansen said. “The Gatos kids say something, then we say something and it’s all because of this thing that the other school said, so it’s self-perpetuating.”

According to Berkson, some Paly students point to a racist prom asking a Gatos student used two years ago as the source of the rivalry. According to 2018 Paly graduate Mattie Orloff, the rivalry first began to boil when Gatos players were heckling at her and other girls on the lacrosse team during a game.

“My junior year, I was new at goalie and was still getting the hang of it when we played Los Gatos the first time that season,” Orloff said. “After the first half, both the JV and varsity boys teams from Gatos showed up and were sitting right behind me and started screaming things like, ‘You suck,’ ‘You’ve already let so many in,’ and then it escalated to them yelling, ‘S—’ and ‘W—-’ at me throughout the entire rest of the game.”

According to Orloff, the JV and varsity boys teams continued to say things about her being ugly and fat, and the disrespectful name-calling continued until she was crying so hard it was difficult for her to see the field.

“When you’re in the game, you want to say anything you can to throw the other person off. I believe it’s all a part of competing, however, I think once it’s all said and done, things should be dropped and I regret not doing that.”

According to Berkson, these incidents may have started the rivalry, but it doesn’t make sense for Paly students to blame the whole Los Gatos school for the misbehavior of individual students.

Another form of conflict between the students of both schools is through social media. According to Cullen, the rivalry became more widespread and easily accessible once negative comments were posted about each other’s sports teams between lacrosse players from both schools.

The most prominent thread of comments between the two schools, according to Orloff, was in the comment section of senior varsity lacrosse player Teagan Felt’s Instagram post.

“On Teagan’s post, I was mostly responding to a #f—losgatos as a joke more than anything, but it got blown out of proportion,” Gore said.

Several students, current and graduated, from both high schools began to chime in and comment things to provoke the other school.

This social media incident ended up in the hands of the Paly administration the following week, according to Orloff and Cullen.

“What I see happening is this in-group, out-group stuff,” Christiansen said.

As opposed to the Gunn-Paly rivalry, the Gatos-Paly rivalry is also fueled by a sense of importance because of what is at stake. Gunn basketball games are non-league and Paly and Gunn have not played in football for years, according to Berkson. The Gatos-Paly rivalry is so contested because both teams are historically good at sports. It has escalated to the point that a larger police presence at games is now necessary and helpful, according to Christiansen.

“When you have two schools that are both exceptional at sports, there’s a high level of competition which is why a rivalry starts,” Gore said. “The reason it has continued is because of how students from both schools have chosen to conduct themselves off the field.”

According to Christiansen, the principals from both schools met with the heads of the athletic department from the county to discuss strategies moving forward. As a result, in a joint statement released by both schools, not only will students be banned from attending sports contests between the two schools, there will also be a Positive Sportsmanship Summit held on April 29 at Fremont High School.

At this summit, 10 student-athlete leaders from each school, athletic directors, the Santa Clara Valley Athletic League (SCVAL) league commissioner and the Central Coast Section (CCS) Commissioner are scheduled to meet to work towards an alliance between the schools to promote and ensure positive sportsmanship and respectful behavior at all future contests between the two schools.

“(The culture) is going to change when we don’t allow students to go to Gatos games, and they won’t allow their kids to go to our games,” Berkson said. “That’s what I would do. Then you got to do that for four years because then, that fifth year, people don’t know anything about (the rivalry).”

In the joint statement, it also stated that “both schools will implement disciplinary repercussions for egregious social media postings that incite or aggravate tensions between our schools prior to athletic contests.”

The new restrictions on student attendance may or may not carry over to future school years, according to Christiansen.

Christiansen said, “If you ask me, I probably would say that (student attendance) needs to be earned back, and that there will be a slow roll out.”