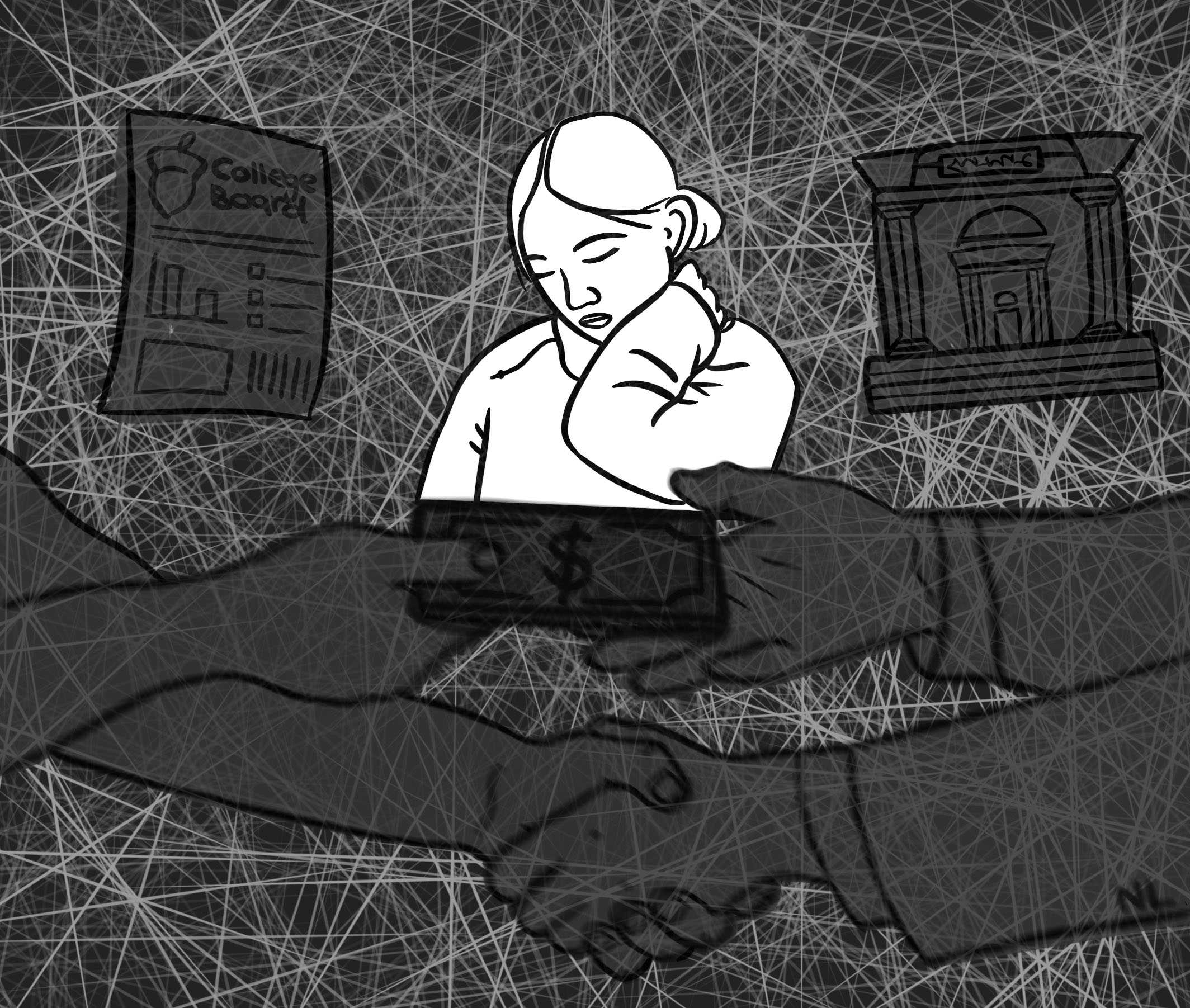 The recent bribery scandal surrounding Rick Singer and college admissions has made local and national headlines. But the notion of bribing your way into college is not new, especially for students living in the Bay Area, where a culture of extreme wealth and a desire for academic prestige have existed for some time. Curiously, while many across the country were shocked by the lengths some parents took to guarantee their child’s admission to elite universities, many Paly students were unsurprised by the news — perhaps because they have seen the same systemic imbalances taken advantage of by the parents of their own classmates.

Practices employed by some Palo Alto parents include using their socioeconomic status to bend the rules of meritocracy through a process referred to as “back door” admissions.

Singer, the man charged with masterminding the recent college admissions scam, has explained  the college acceptance process using three doors: the “front door,” through which students are accepted into universities on their own merit; the “back door,” where students’ parents donate large sums of money to the university to better their chances of acceptance; and his own creation, the “side door,” where unqualified students are guaranteed admissions to top-tier universities without having to make building-sized dents in their parents’ wallets or face public scrutiny for abusing their wealth to gain admission.

The current scandal has reignited the debate about the imbalances of the college admissions process, with some claiming there is only a fine line between the side and back door admission schemes, and that endowing a building to a school is no better than bribing a college coach.

However, the back door admissions scheme is not as despicable as many make it sound.

In an ideal world, the college process should serve as a meritocracy, and all students should gain admissions to colleges through the “front door.” However, we live in a society driven by capitalism, where parents and universities make decisions with the lowest opportunity cost. If a wealthy parent has the financial means to legally give their kid a leg up in the college admissions process by donating money, then it is their right to do so.

Similarly, when an educational institution is presented with the tradeoff between admitting one underachieving student and receiving funds or a new facility that would benefit thousands of other students, it is understandable why admitting the student whose parents have made large donations is in the school’s best interest.

Additionally, a large portion of donors’ money is allocated towards subsidizing tuition and scholarships for low-income and high-achieving students. The back door admissions scheme is a two-way street. Since colleges have every incentive to keep the “back door” open, it will be nearly impossible to eliminate.

When Ivy League universities saw their applicant pools become increasingly filled by Jewish students in the 1900s, they adopted legacy admissions processes to maintain their traditional student body of upperclass children. According to the chairman of the Princeton Board of Admissions at the time, the legacy policies aimed to address the “Jewish problem” that many universities experienced.

A recent lawsuit brought against Harvard by the Students for Fair Admissions over the university’s practice of affirmative action sparked a national conversation about the role of race in the college admissions process.

Unfortunately, there has been no widespread discussion about how the use of legacy preferences can create the same inequity, essentially serving as a form of affirmative action for the wealthy.

Legacy preferences extend the institutional disadvantages faced by students of minority backgrounds by disproportionately benefitting white, affluent students, who tend to be the alumni of prestigious universities. For instance, according to a 2008 study by Duke, the university’s legacy students were more likely to be white and private high school graduates than the rest of the student body.

Institutional priorities reserve so many spots for legacy students that those who have to depend on their own merits for admission are forced to compete with harsher admissions criteria for the remaining spots. In a study conducted by The Harvard Crimson, 29 percent of Harvard University’s incoming class of 2021 was made up of legacy students. Factoring legacy into the college admissions process robs hard-working students from low socioeconomic backgrounds of the opportunity to move up the social ladder through higher education.

If we want to make progress in closing the achievement and wealth gaps in our country, educators and politicians can help. They can stop preaching idealism and start changing policy to fix these systemic injustices, not hide behind scandals to mask the real problems.