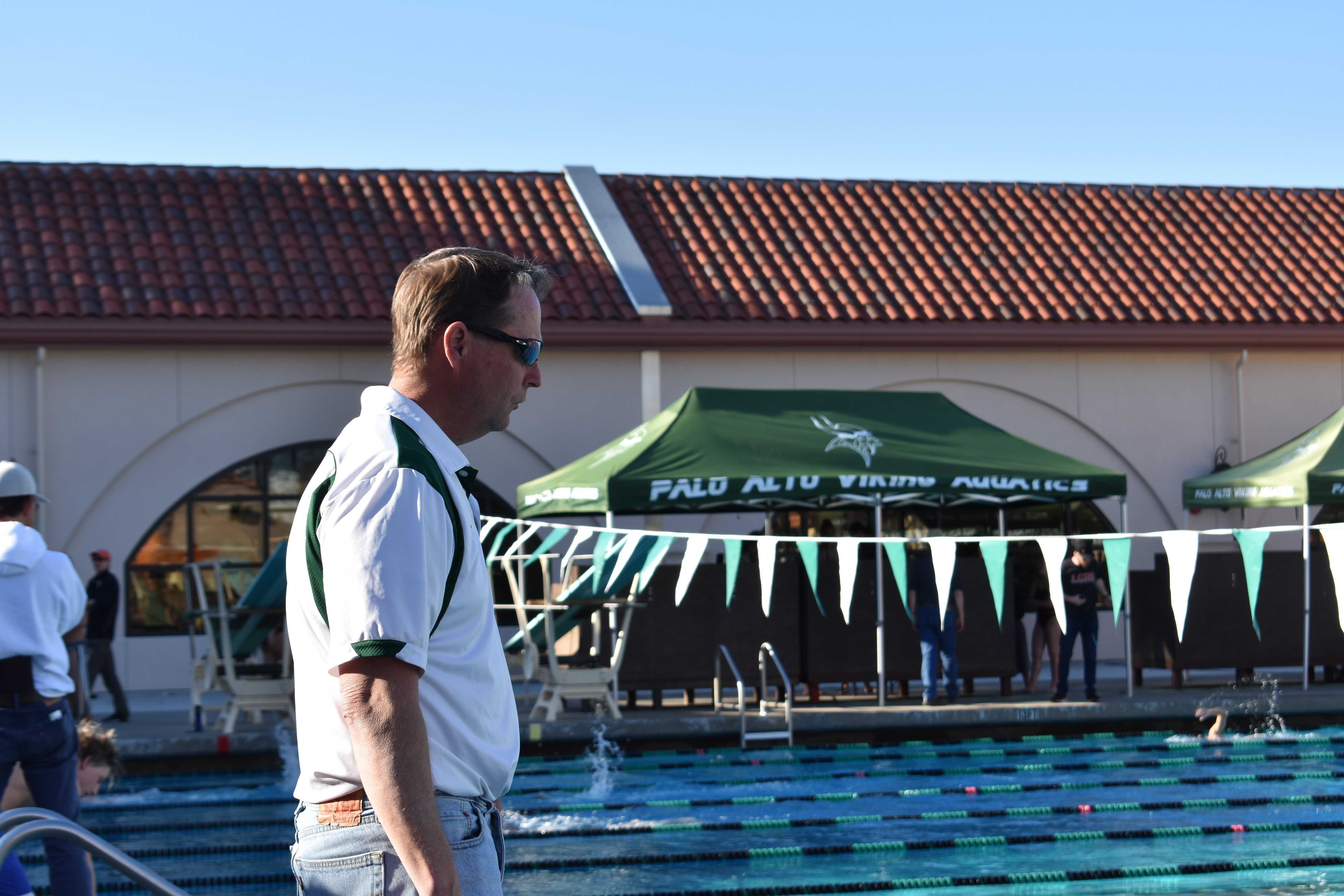 Dye’s inspiration for becoming a coach came from his passion for swimming, as he was a competitive swimmer until college. As a coach, he enjoys being able to watch young men and women grow, both in swimming and in maturity.

Dye began his coaching career as an assistant coach for Coe College in Cedar Rapids, Iowa, before moving on to coaching the Los Altos High School swim team for eight years. Then a job opened up at Paly, and the rich history of Paly swimming and his dedication to build a community and a team convinced him to switch schools.

“Paly has the richest tradition of swimming in the area of any public schools, from the days when they were in North Coast Section and won 19 section titles to their dominance of the Santa Clara Valley Athletes League.”

With 28 years of coaching experience, Dye believes that, in order to have a successful team, all individual swimmers need to recognize that they are part of a team.

“Your job is not just to think about yourself, but (instead) to motivate others and make others better,” Dye said. “And the more you work on that, stronger the bond builds and stronger the bonds build, the team will swim faster.”

Although swimming is primarily an individual sport where swimmers spend most of practices in the water,  senior Aaron Kuo mentions how Dye values team unity and focuses on building a strong team culture with good work ethic.

“He stresses the idea of pushing each other in practice, which really brings the team together making swimming very enjoyable,” Kuo said. “Danny being able to create such a close-knit team in such a short amount of time is amazing.”

According to junior Ashley Guo, he is reasonable when it comes to prioritizing school work, since he sees himself as a teacher first.

“He realizes that we are student athletes, and helps us make sure swimming isn’t an additional source of stress,” Guo said.

Since Dye coaches school season, he has the least amount of time to get the entire team to improve compared to other coaches who coach swimming year-long. So he pushes the team hard in a short amount of time. Even though he makes the swimmers swim over 7,000 yards everyday, not including the yardages during morning practices, he wants the best for his swimmers and believes that results should follow.

“I like how he emphasizes that our success is based on ourselves and how much work we put in, both as a team and individually.”

But in order to reach this level of success, he uses his “old fashioned,” “tried-and-true” method, which involves piling a lot yardages, offering honest encouragement and feedback to his swimmers and helping develop stroke techniques and race strategies.

“Personally, this has worked out great for me,” Guo said. “The past few seasons I’ve swam with Paly, I’ve seen great improvements.”

Besides swimming skills, Dye has encouraged his swimmers to become leaders by giving them responsibility over the team. Senior Marcus Hong was rewarded with the captain position for the boy’s team.

“He’s most definitely helped me grow into more of a leader,” Hong said. “He puts the focus on the team captains, (who) essentially take charge of the time.”

From his  many coaching experiences, Dye has come upon many challenges, whether differences of opinions with athletes and parents or trying to work towards what the team is trying to accomplish. In order to overcome these hurdles, Dye motivates and gives inspiration to his swimmers by expressing to them that they can do more than they think they can.

“The key is to not be dismayed, and keep yourself focused on your accomplishments.”

Throughout his 15 years coaching at Paly, Dye still remembers the moment when the girls varsity team won CCS during his first year coaching in 2005. Besides these individual moments, Dye also enjoys coaching because of the entire team.

“I am blessed,” Dye said. “I’ve had some of the best (swimmers) in Paly history, and regardless of their speed, it’s their personality and the different individuals that make up the team.”