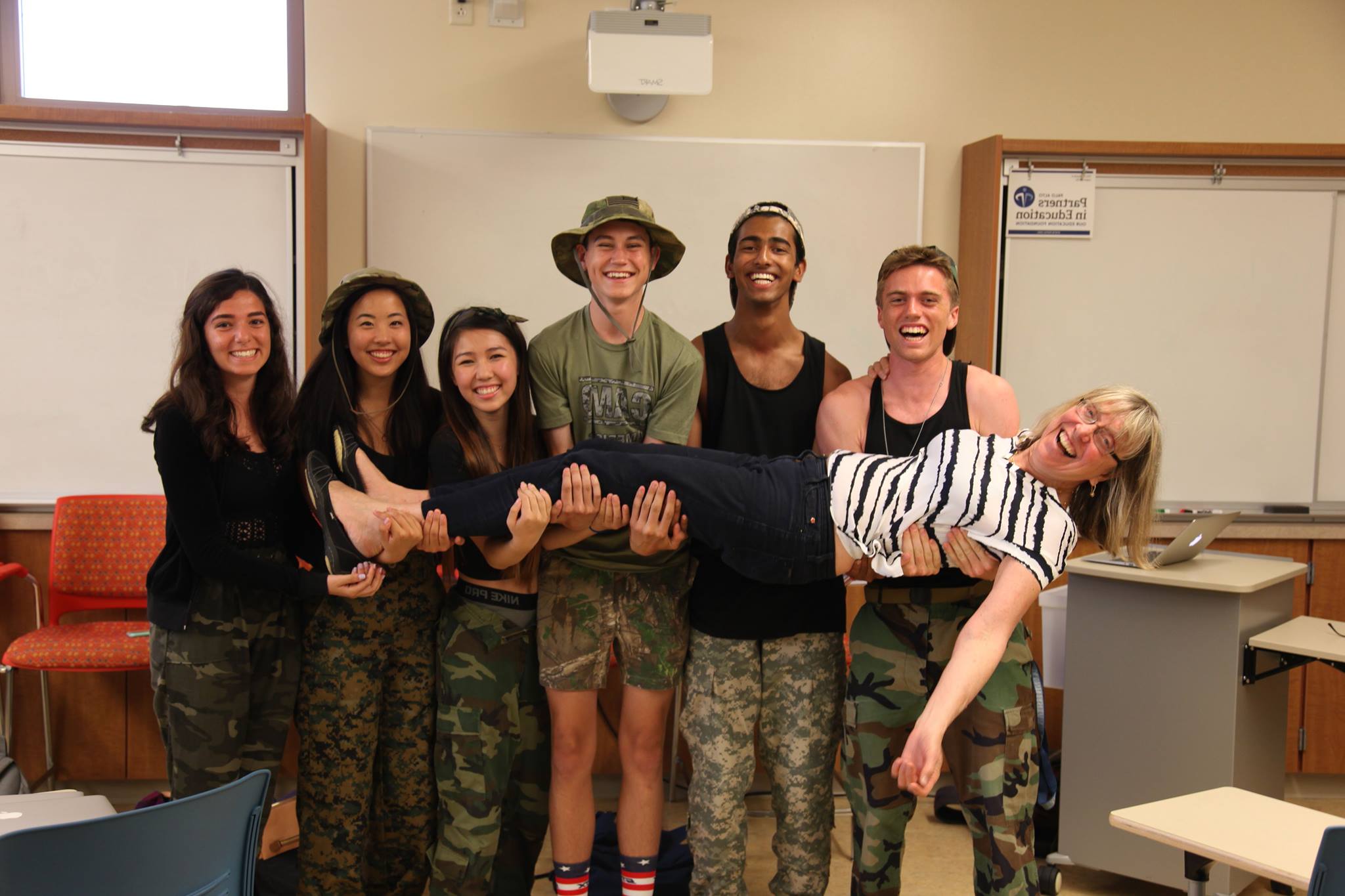 Mischa Nee, a Stanford junior, Paly graduate and former Editor-in-Chief of The Campanile who died recently in a hiking accident, was eulogized last week as a young man who “said yes to life over and over and over” during an emotional memorial service before hundreds of mourners at Stanford Memorial Church.

Nee died on the island of Mallorca, Spain, while traveling with a group of Stanford University undergraduates who had been studying in Europe during the winter quarter. They were hiking together in the afternoon of March 22, but other group members lost sight of Nee, who had climbed a small nearby hill alone, according to his father, Eric Nee.

At the April 11 memorial service, Rabbi Patrice Karlin-Neumann, Stanford University Senior Associate Dean for Religious Life, compared Mischa to “joy in motion.” Friends and family members described Mischa as a multifaceted artist, a computer programmer, an expert juggler, a deep thinker and an irrepressible explorer with an insatiable curiosity who embraced life.

To his father, Mischa will be remembered as a motivated and creative son who had a unique way of thinking and loved exploring.

“(Mischa) excelled academically but he really put that into perspective. He would always take time to hang out with friends, go out and do things and have fun. I think that aspect of him was really pretty special, especially in Palo Alto; there’s a lot of pressure to perform and excel in everything that you do … He also was just really naturally curious, he had a large range of interests and he would explore, as a kid, in high school and in college.”

Mischa, 20, graduated from Paly in 2016, where he participated in many school activities besides The Campanile, including the Speech and Debate Club, junior varsity lacrosse and varsity cross country. Mischa also worked in the Dominican Republic through Amigos de las Americas, a popular program for Paly students. According to Mischa’s former teacher advisor and Advanced Placement (AP) Psychology teacher Melinda Mattes, he stood out because of his engaging personality.

“Mischa once told me, ‘I am not afraid of failure,’” Mattes said in an email. “‘It is a phobia that impedes many in their attempts to solve problems, but I have learned that there is always a solution.’ He handled everything with aplomb, never shying away from challenges, while maintaining an enviable confidence. He was a student of everything he attempted, and he was intelligent enough to master the intricacies of any chosen endeavor. He was a natural and comfortable leader who was committed to his academic and extracurricular activities.”

Mischa’s former English teacher Lucy Filppu agreed, saying she shared a special bond with Mischa. Filppu said she witnessed Mischa grow and mature throughout his time at Paly into an extraordinary young man.

“I watched him transform in front of my eyes,” Filppu said. “He was a disheveled sophomore who didn’t wash his hair. He lit up the entire room. He was brilliant. He was gifted. He was imperfect. He used to come talk to me about stress. And he had talents beyond many people I’ve seen in my career of teaching.”

According to Filppu, though Mischa excelled as a student, one way he stood out was his ability to be vulnerable.

“I would say given that he was so well known on campus, my memories aren’t about his public personal. They were about the intimate relationship he and I had … it was his humor and his energy, but also that he was real and he trusted me enough to not be perfect all the time. Because he was perfect on paper. He was absolutely perfect. But my favorite memories of him were the moments when he was so vulnerable. He knew how to be vulnerable, and he knew how to create intimacy with teachers, at least me… I thought of him as a son.”

Mischa’s family spoke at his memorial service, with Eric’s speech followed by speeches by Alex (Paly, 2009) and Nadya Nee (Paly, 2013), Mischa’s brother and sister, who said the family believed Mischa would change the world.

A recording of Mischa’s fifth-grade graduation performance at Addison Elementary School of the song “Imagine” by John Lennon was then played, which Eric said in an interview was one of his favorite memories of his son.

“He was very excited to graduate out of Addison and move onto Jordan, and he wanted to do something,” Eric said. “He was a little nervous about performing in front of everyone and you know in fifth grade, you’re going to be a little self-conscious about how everyone sees you and he decided he was going to perform the song ‘Imagine’ by John Lennon a capella. And he was nervous about that, but I think he was a very brave person. He got up there and did it — and I was so proud of him.”

The Campanile’s teacher advisor Esther Wojcicki and some of Mischa’s friends from Paly — Aiva Petriceks, Nick Cook and Alisha Kumar — also spoke at the service.

“You feel so much pride because you not only knew him, he was your friend,” Petriceks said. “He’s the high school friend you want your college friends to meet.”

In an interview with The Campanile, Petriceks said Mischa truly changed her for the better.

“For some friends, it’s like you love your friends and you think they’re cool and you have really great memories with them,” Petriceks said. “But at the end of the day, they don’t change who you are as a person, they don’t change you to your core. Mischa wasn’t that. In all honesty, if I had to name one friend that has changed me for the better, it’s Mischa… He’s the one person that I really do think I wouldn’t be the person I am today if it wasn’t for him and if it wasn’t for everything we’ve been through together.”

Three friends from Stanford University — Patrick Kurzner, Matthew Blaisdell and William Kenney — also recounted memorable moments they spent with Mischa, who was majoring in computer science and planning to minor in art history or studio art. Kurzner said he and Mischa had once been on a turbulent flight and talked about what they would have wanted others to know if they had died.

Mischa said he wanted to “tell his friends and his family how much he loved them and that he lived a great life,” Kurzner said. “Mischa lived with a spirit for life.”

According to Petriceks, The Campanile Lifestyle Editor in 2015-16 when Mischa served as an Editor-in Chief, Mischa’s natural inquisitiveness drew him to journalism and prompted him to join the publication.

“I think journalism in general really added to Mischa’s curiosity, to put it simply,” Petriceks said. “It gave him the means and a way to kind of get to know situations and get to know people better and understand why things were the way they were … He loved the challenge of having this difficult article in front of him and writing this beautiful piece and making sure that things got the appreciation they should.”

Throughout his time on The Campanile, Mischa made many contributions, from facilitating creative class conversation to developing a new design style for the Opinion section and creating a great environment through his creativity and supportive presence, according to the other Editors-in-Chief he worked with.

“(Mischa) brought a lot of character to our Editor-in-Chief class and the paper itself. He was always such an in-depth writer; he wrote about a lot of topics that people had never covered before and was really great with design. As an Editor-in-Chief, I think he just brought a lot of entertainment and light for all of us during production. He always had a really positive attitude.”

Mischa’s charisma made him a strong leader and a role model for his peers and members on The Campanile staff, according to Miranda Chen, another Editor-in-Chief with Mischa.

“I was just always impressed by Misha, he just exuded this sense of liveliness,” Chen said. “He not only was incredibly smart academically, but he had so many unique interests (and) he was really witty and funny. He was always so adventurous … He was always very present and he just seemed to love life.”

Specifically, Mischa helped others build their confidence, according to Mattes, and he was a fierce and loyal supporter who believed in his friends. He sought to improve not only himself, but also help others, according to Cong. Mischa brought a lot of character and his personality with him everywhere he went, Cong said in an interview. She, like many of his peers, learned valuable skills from him and seeks to emulate his drive and self-confidence.

“Especially in high school, when you haven’t had the time to discover who you are outside of your home and school environment, it’s really hard to understand who you are and what you want,” Cong said. “And I think Mischa had such a defined sense of self in the best way already in high school. He knew who he was, he showed it to the world, and everyone loved him for it. There were certain things that you knew were just so Mischa.”

Though Mischa was bright academically, he will be remembered most for the brightness he brought into so many people’s lives.

“(Mischa) transcended (the idea of a perfect student), he proved the idea that you can become your true self in high school, and that would be the greatest gift for any kid,” Filppu said. “Where he went to college, that’s all exciting, but that’s not really the essence of this kid. There was something much bigger about him than that. That’s why he was so special — he took risks to be who he was. And he must have felt safe in who he was, his family, his peers and his school to do that. So in that way, to me, he’s not the role model of the genius student, even though he was a great student; he’s a role model that at Paly, you can be who you are and thrive if you’re willing to take the risk to do it. And that’s what he did, he thrived here.”

The family of Mischa Nee has created a website in his memory. Additionally, for people who want to honor Mischa’s memory, his family created a memorial fund benefitting Camp Winnarainbow, a nonprofit camp Mischa participated in from ages 5 to 18. People can donate to the fund at the memorial website.