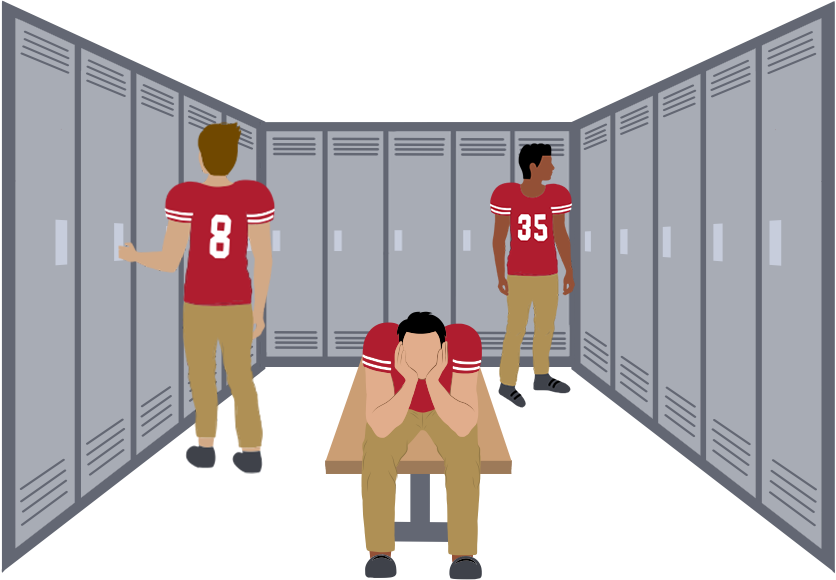 Solomon Thomas, San Francisco 49ers defensive end and Stanford alum, stands at the front of a Paly psychology classroom, his hulking figure towering over the crowd. His lunchtime audience, comprised of student-athletes and members of the Bring Change to Mind Club, hangs onto his every syllable as he recounts his struggles with mental health following his sister’s suicide in 2018.

Through collaboration with school clubs and organizations such as the American Foundation for Suicide Prevention, Thomas aims to normalize discussion about mental health for people who might otherwise feel uncomfortable discussing their experiences.

According to Thomas, many professional athletes whom the public perceives as successful regularly face debilitating mental health issues.

“I would feel guilty being depressed sometimes because I live this life — I’m in the NFL, I have all this money, I live in my dream life — but I’m sad,” Thomas said in his talk.

According to Thomas, his struggle to acknowledge and treat his mental health issues is part of a pervasive trend in athletics.

Thomas said this mentality and the resulting stigma affects not only professional athletics, but every level of sports culture.

This was certainly the case for senior Dwayne Trahan, a Paly varsity football and basketball player who recently began suffering from anxiety.

“Playing football is considered a very macho sport, (and) talking about mental health can actually be very difficult,” Trahan said. “(Football) is a very tough sport, and mental health issues are kind of seen as ‘soft’ in that type of environment.”

Trahan said his anxiety began as a result of post-concussion syndrome following a football-related injury in November.

“In the beginning, it was really difficult,” Trahan said. “I couldn’t sleep. I did not feel like myself. I couldn’t be in bright rooms or loud places, and I would have (an) anxiety attack almost every day. But, with time, I’m getting better at controlling it, and I’m slowly starting to feel (like) myself again.”

Bring Change to Mind Club President, senior Lia Salvatierra, who invited Thomas to speak at Paly, said the club aims to destigmatize conversations about mental health so Trahan and others athletes face fewer obstacles on their journey to recovery.

“I found a really important pathway to discussing mental health through athletics as one of the main reasons mental illness is stigmatized is through a mind-body separation,” Salvatierra said. “We do not treat mental health as (a matter of) physical health.”

According to Professor Lisa Post, director of Stanford Sports Medicine in Psychiatry and team psychologist for the 49ers, athletes’ experiences can vary significantly compared to the rest of the student body.

“(Athletes) experience special demands for balancing both academic and sport-related priorities and forming interpersonal relationships while managing the physical demands of training,” Post said. “A tendency toward perfectionism and the influence of a distinct athlete identity inlace self-esteem and mental health both positively and negatively.”

Post said a growing awareness of athletes’ issues has led many teams to increase player access to mental health professionals to reduce stigma around mental health.

Salvatierra, whose club has hosted several other events with professional and collegiate athletes, said the talks also help raise awareness about the nature of athletes’ mental health problems.

“When physically strong people relay their stories of emotional struggle, it can be really empowering for an audience that may view them as invincible.”

Senior Annie Niethammer, a member of the Bring Change to Mind Club, said her participation in the club as well as her experience on the Paly basketball team has improved her mental health.

“There were some points where I felt like I had so much on my plate, and I even told my coach that I was having a panic attack and I just couldn’t go to practice that day,” Niethammer said. “He was being super helpful and understanding and that is what really calmed my nerves.”

According to Niethammer, the unwavering support from her coaches and teammates has helped her manage her anxiety and get through difficult times.

“We are a very close group of girls, so it is easy to get along,” Niethammer said. “We always motivate each other when people are down.”

Scott Peters, the girls varsity basketball coach, said he deliberately creates an atmosphere among the team in which students can feel comfortable talking about their issues.

“On the basketball team, I hope they feel connected with each other,” Peters said. “The more people can be connected in high school, the more support networks they are going to have.”

According to Peters, the girls varsity players feel especially close because his team is led not by a captain, but by the teammates collectively. Peters said eliminating the captain position in 2008 to prevent unnecessary disputes among teammates, but soon realized the change allowed players to speak more freely.

“After I implemented (the system without captains), I realized that it allowed the freshman and the sophomores who wanted to speak out to do so,” Peters said.

Peters said the system significantly benefits the players by allowing them to more easily seek help for their mental health issues.

“(We try to) create an environment where players are not afraid to speak up,” Peters said. “The more communication you have and the more players are allowed to say what they want, the safer the players feel. They can voice their opinion, they feel valued and they feel that people care about them.”

According to Peters, he often refers students who approach him to the Paly Wellness Center or counseling services if he believes they lack effective support systems.

“(Players) might not be able to talk to me,” Peters said. “The number one question I ask is ‘do you have someone you can talk to?’”

“We do team dinners every week before games and so guys can sit and eat and talk,” Gifford said. “We have opportunities on Saturday after meeting to sit and talk with coaches, and then I, generally speaking, have an open door policy with all our guys.”

According to Gifford, he has made several changes designed to encourage athletes to talk about their problems.

“One of the points of emphasis that I made when I took (over) the program was telling the members of the team that it was really important… that (they) took care of their mental health first and foremost.”

According to Niethammer, Paly might better address athletes’ mental health problems by cultivating a similar  atmosphere of openness in all sports, where everyone feels comfortable discussing their experiences.

“It is important to know that there are lots of people who have mental health issues, whether (they) are (athletes) or not,” Niethammer said. “What is important is that people start talking about it, because  they are not  alone.”