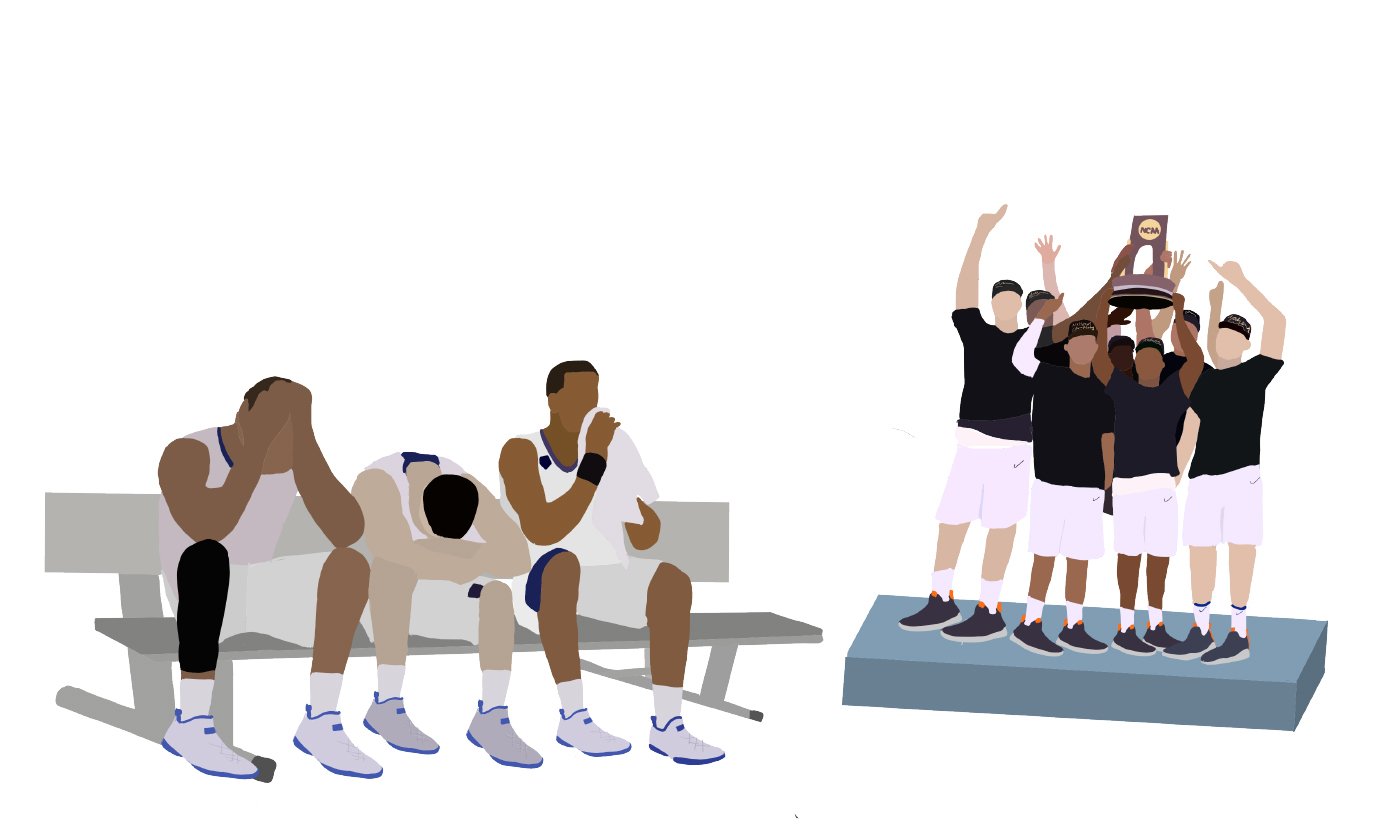 The agony of defeat

The University of Florida is a point away from winning. As the volleyball hits the floor and the final whistle blows, the crowd’s eyes are drawn to the Florida team as it celebrates its 2017 national semifinal victory over defending national champions Stanford University. As reporters and fans swarm the Florida players, Stanford’s Kathryn Plummer, the national women’s volleyball player of the year, and the Stanford team look to each other in dismay and disappear into the locker room.

During high-stakes games such as championships or playoffs, the winners will inevitably get the spotlight. Rarely do people know what happens to the team that puts in equal amounts of  work but comes up short.

Whether at the collegiate, professional or high school level, most athletes know the pain of losing a monumental game.

“We (Stanford) were playing really tight, and that didn’t translate well into good volleyball,” Plummer said. “After the match, I felt really disappointed because I knew that I didn’t play well and that our team didn’t play well, and we still only lost in the fifth set.”

Meanwhile, at Paly, junior wide receiver Jamir Shepard is not only a student athlete, but a national football recruit who has played in a multitude of impactful games. Shepard is also familiar with the dissatisfaction of losing a crucial game.

“The toughest loss was the football game against (Menlo-Atherton High School) in the (Central Coast Section) semifinals,” Shepard said. “I felt very prepared for this game. I was ready for them all week, but after that loss it hurt me a lot.”

According to Buckle, athletes having trouble coping with losing high-stakes games is a prevalent issue at Stanford.

“This is quite common, and many athletes struggle with not performing well during high stakes games,” Buckle said. “Sometimes athletes will catastrophize a poor performance or practice, as if all their work to date has been for nothing. Others may assume that their teammates, coaches or families are thinking poorly of them. All athletes struggle differently.”

Buckle said he understands the hardships student athletes endure day-to-day. So, when the games become increasingly important, Buckle knows dealing with losing can be a complex process.

“Usually, coping with these losses is not simple,” Buckle said. “High level athletes put in so much time and effort into their preparations that it can be heartbreaking to lose. Losing also has difficult implications for athlete’s self-concept and identities.”

Plummer said accepting the outcome of the national semifinal game was difficult, but she knew exactly what she had to do in order to manage the defeat.

“I cope by taking some time away from what I did not accomplish,” Plummer said. “I usually do this by spending time with my family and friends — people that I know will love me regardless of how I perform. When the frustration settles away, I analyze what I did, specifically looking at film. I think that once you step back from failure and are able to separate the emotions from the failure, you are able to accept that it didn’t work out.”

According to Buckle, the process of healing from tough losses is in no way streamlined, as Stanford sports psychologists work closely with student athletes and their individual struggles. Although the process may be lengthy, it is essential to provide support.

“I start by listening to each athlete’s struggle and trying to understand their experience,” Buckle said. “I offer support, empathy and validation of how they feel. I try to explore their thoughts, feelings (and) behaviors related to the loss and how these relate to their distress. I give the athletes time and space to grieve the loss and process their feelings around it.”

Along with debriefing and fully understanding athletes’ troubles, Stanford sports psychologists also try to encourage their athletes to think about the bigger picture, according to Buckle. By proposing new training goals to the athletes, psychologists constantly seek improvement by mentally training for the next competition.

Looking to the future is a common theme for athletes. In the exhilarating football game against Menlo-Atherton, the Paly football team was devastated after their defeat ended its promising season. However, the team later used the loss to further their goals. Determined to overcome this crushing defeat, Shepard said he now uses the game as a reason to improve for next year.

“That game motivates me to work harder and harder so next year it won’t happen again. I want to be the best team in the league next year.”

Plummer said she has learned to constantly embrace a growth mindset when it comes to athletics. With encouragement from herself and her peers, Plummer can look back at the Final Four defeat versus Florida and develop as a player.

“After the loss, I immediately was focused on what we could do next year to change the little things that kept us from our goal,” Plummer said. “I dialed in with the team to making our team a more cohesive unit to ensure that the same thing didn’t happen again. The whole year, whenever we felt disconnected, we referenced the Florida game, and this snapped us right out of it.”

Oftentimes losing games at the highest levels can entail more recovery than meets the eye. However, with personal or professional guidance, athletes can learn from their losses and continue to grind at the sport they love.

“They (athletes) learn something from each experience and incorporate that learning into their next effort,” Buckle said. “Their motivation is guided not simply by wins or losses, but by how well they can master their skills. They never stop building and learning for as long as they compete — they are quite resilient in that way.”