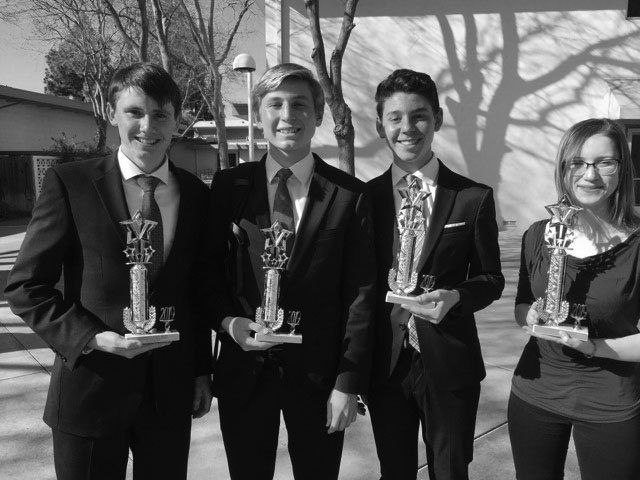 McNealis qualified in Lincoln-Douglas (LD) debate, which is a form of one-on-one debate. Typically, LD focuses on controversial social and philosophical topics.

McNealis has had extensive experience as a debater, having participated in the team for all four years of high school.

“Debate is the most terrifying, challenging, energizing, rewarding activity I’ve done in high school,” McNealis said. “And while I do love delving deep into research, coming up with creative arguments and exposing logical flaws, our community is really what makes it worth joining.”

In order to qualify for nationals, McNealis competed at National Qualifiers for LD. Her ticket to nationals did not come easy.

“You have to place in the top three at a tournament called National Qualifiers,” McNealis said. “It’s a tournament at Bellarmine (College Preparatory) with a maximum of four debaters from each school in the area. The whole tournament was a great experience. Every debater I hit was strong, and I think having challenging opponents really pushed me to elevate my argumentation and speaking style.”

This is the first time anyone from Paly Debate competing in LD has qualified to Nationals in over a decade, and McNealis said she feels exhilarated about her achievement.

“I’m incredibly excited — I think it’s been either 10 or 16 years since we’ve qualified someone to Nationals — so it feels pretty special,” McNealis said. “I can’t wait to meet amazing debaters from all around the country, and I can’t think of a better way to cap off my time in an activity that has meant so much to me over the past four years.”

Throughout her years of debate, McNealis said she had an encouraging and supporting team around her.

“I’m so grateful to the brilliant coaches who have helped me every step of the way,” McNealis said. “Our head coach Jennie (Savage) is one-of-a-kind. My teammates have given me unconditional support and assistance.”

Nevertheless, McNealis will take no time off in preparing for the upcoming event. She plans to undertake thorough and comprehensive preparation with the help of the Paly Debate staff.

“I’m really lucky to have one of our coaches, Sarah Youngquist, to help me prepare for Nationals, so I’ll definitely be casing and going over arguments with her,” McNealis said. “Nationals is a circuit tournament, meaning that people use more elaborate techniques such as theory and spreading that I’m not too familiar with, so I’m going to practice responding to circuit arguments. Hopefully I can do Paly proud.”

“One of the most impressive things was getting to meet fellow debaters from all across the country and hear their perspectives and stories,” Thibault said.

According to Thibault, one must prepare vigorously in order to succeed at a Congressional debate tournament. Thibault said preparation consists of plenty of background research, in addition to the writing and memorization of speeches that will be used during the tournament.

“Preparing for Nationals was a similar process (to other tournaments),” Thibault said. “The only difference was the magnitude of preparation required and the importance of research.”

This year,  Levine was able to qualify for the Congressional Debate National Tournament that takes place this summer. This is Levine’s third year on the team and first time qualifying for Nationals.

Levine credits her recent success to her newfound ability to improvise during her rebuttals this season. This skill is something Levine has not always had, as her experience over the past three years has allowed her to become more comfortable straying from her pre-written speeches.

“I’ve been working on being more flexible and it was really helpful, as I essentially improvised several speeches during National Qualifiers,” Levine said. “Being able to throw away your previous plan and give speeches that are essentially just rebuttal is a really important skill in (Congressional debate) and it’s what carried me through.”

Levine offered praise to her coaches and teammates, saying she would not have been able to make it to Nationals without their help and guidance.

Thibault acknowledges all the hard work Levine has demonstrated this season and believes it will lead her to finish the season strong.

“(Levine) is incredibly hard working, attentive and listens better than anyone I have ever seen,” Thibault said. “That enables her to provide context and perfectly encapsulate and summarize the debate for the judges.”

Paly Speech and Debate Head Coach Jennie Savage is proud of the team and hopeful of the successes that have yet to come.

“It was a thrill for the team to qualify double the number of Paly competitors that we’ve ever had to the State Championship,” Savage said. “The eight students who are preparing for States in May and Nationals in June are all working closely with their coaches and teammates to get ready.”