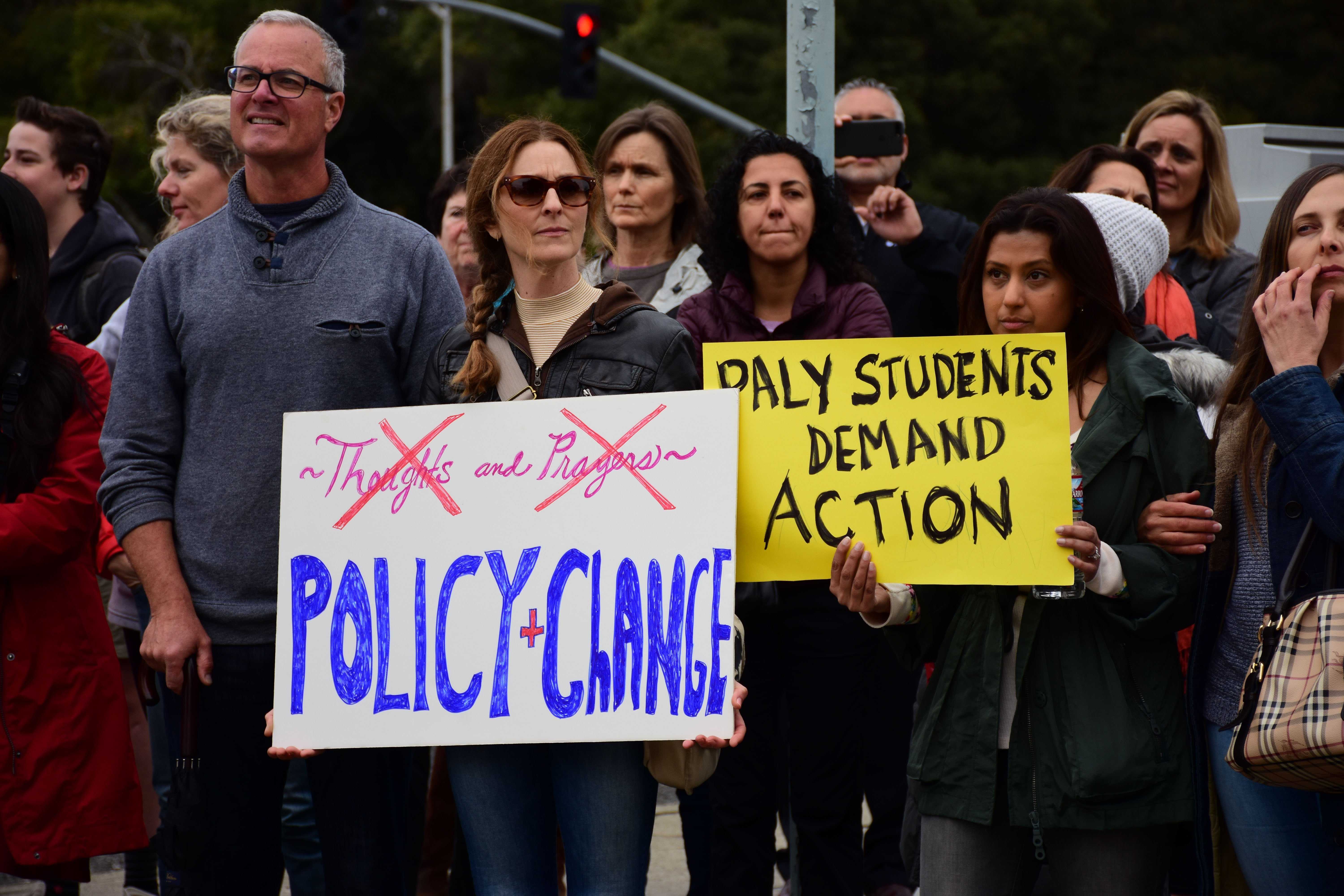 Senior Rebecca Cheng carefully applies paint to a canvas, writing “ch-nk” and “yellow face” in vibrant colors. These cruel words hang from the painted hands of a woman in a traditional qipao dress. Cheng’s work is a unique way of fighting social injustice — she said her piece is meant to bring awareness to the racism many Asian Americans face. Through local protests and social media, students have utilized their voices to promote positive change. Although these actions raise awareness, some student activists believe they are only the beginning of a long march for change.

Certain students have gone beyond protest, however, pushing for change by creating conversation through art, becoming involved in the political process or organizing clubs within the community.

Social media has become a common tool for speaking out about social issues. Although posting can spread information to others, it can sometimes be viewed as lazy activism. The term “slacktivism” has been defined by the Oxford Dictionary as “the practice of supporting a political or social cause by means such as social media or online petitions, characterized as involving very little effort or commitment.” According to some Paly student activists, these efforts are not to be condemned as worthless but further involvement is needed to successfully enact change. Cheng has gone beyond social media posts, approaching social activism through a unique lens — her artwork, which serves as an outlet for her to reflect on social issues.

“I try to make pieces that show my point of view and to make a statement about my stance. For example, I’ve made a drawing that protests gun violence and another one against racism.”

Regarding her art, Cheng said she views her work as a conversation starter, rather than a direct reason for change.

“I think the most direct reaction that I’ve gotten would be like, ‘I didn’t know about this before’ or something like that, and it usually starts conversation,” Cheng said.

Senior Warren Wagner said he has found success in fighting social injustices by becoming involved in politics. At a young age, Wagner said he became interested in lessening inequalities in his local community. Motivated to seek direct change, he volunteered for local politicians who shared similar goals.

“When I lived in Sacramento, I volunteered for mayoral candidate Darrell Steinberg, and he went on to win,” Wagner said. “Now, as mayor, he’s been a leader on fighting homelessness and his policies have really helped revitalize downtown, and I always know that I played a part in helping give back to my city.”

Although Wagner has attended multiple protests and values their effect, he feels it is necessary to take a step further in fighting injustices. According to Wagner, educating voters on issues and different candidates is an easy way to have a positive impact.

“The most effective way to fight injustice is the day-in, day-out work that goes into supporting the candidates or causes that you’re passionate about,” Wagner said. “The first step is always to start talking about the issue and attending protests and rallies to raise the profile of an issue — but that rarely changes anything on its own. Once you’re doing that, though, the most important thing is easily to pitch in by going door-to-door or making phone calls or doing whatever you can to help really convince voters and make change.”

Although Wagner said the best way to have a positive effect is to become directly involved with these issues, he said he has mixed feelings on the intersection between social justice and social media.

“Social media activism gets a pretty bad rep, and it’s not all warranted, because it’s important for people to express their beliefs through whatever platform they have,” Wagner said. “But it does get to a point where people just complain incessantly on social media without doing anything else to help create change, so then that stops being productive. But social media is also essential for promoting events, spreading word and just organizing in general.”

Junior Arianna Mao, president of the Intersectional Feminism Club, has participated in various protests. Although she values her participation, she said these marches are to raise awareness instead of initiate direct legislative effects.

“While I believe that perhaps protests that I have been a part of have raised awareness for relative social issues and maybe sparked some public interest, I don’t feel that these protests have achieved intended legislative, social change.”

According to Mao, these issues can be misunderstood when promoted through protests.

“Constant rallying and protesting with reactionary, emotional impulse has made the public more desensitized to the issues that such activist groups are trying to raise awareness for,” Mao said. “I definitely believe that if one is going to hold a protest, that they have to organize well and gather a lot of people and resources to really have meaningful impact for social change.”