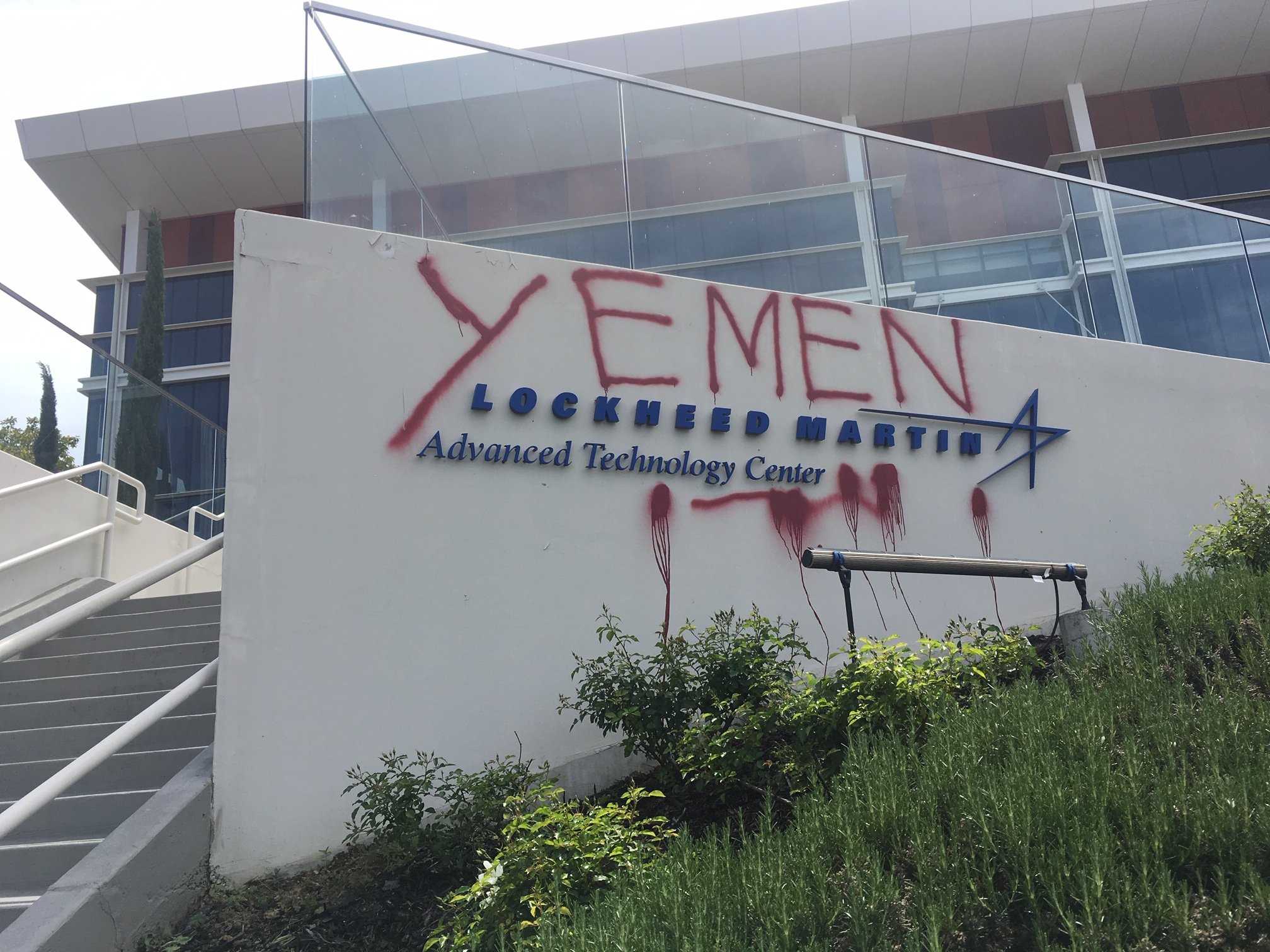 Lockheed Martin sign vandalized due to company’s involvement in Yemen

The date refers to an attack on a school bus in Yemen which killed 43 people and wounded 63. Of the victims, at least 29 of those killed were under 15 years old and at least 30 of those injured were children, according to the International Committee of the Red Cross. The bomb used in the attack was manufactured by Lockheed Martin, who declined The Campanile’s request for an interview.

Druzin said he was motivated to act by the fact that Lockheed Martin has several Bay Area offices, all of which contribute to the local economy and thus benefit residents.

“If Lockheed Martin didn’t have a office in Palo Alto, I don’t think I would have done anything. We have a responsibility because we benefit from what’s going on, and we shouldn’t.”

The decision for Druzin was not impulsive; it came after months of contemplation.

The timing of the act was also not a coincidence, as it occured one week after President Trump vetoed a bill to end U.S. support for the Saudi-led coalition in the war in Yemen.

“It was a cumulative thing,” Druzin said. “(My protest was a result of) a buildup of reasons, until I finally made the decision to say, ‘Okay, I’m going to do something and do this now.’”

Druzin said he does not expect Lockheed Martin to stop manufacturing weapons to the Saudi coalition as a result of his protest, but hopes that his act will inspire at least one employee to leave their job at Lockheed Martin for moral reasons.

Despite not impacting Lockheed Martin’s policies, Druzin’s protest was appreciated by the Yemeni community both locally and internationally, according to Jehan Hakim, Founder and Chair of the Yemeni Alliance Committee (YAC).

The YAC is a non-partisan social advocacy group which was formed to support Yemeni-American communities in the Bay Area during periods of social unrest. Recently, YAC has been focusing on advocating to end U.S. support for the Saudi-led coalition in the war in Yemen. Strategies to accomplish this include providing support to YAC communities and allies so that they can challenge national security and foreign policies that negatively impact Yemenis and Yemeni-Americans, according to Hakim.

“Painting over Lockheed Martin’s headquarters was such a bold and courageous move. I appreciated him for acting in a way that has helped raise more awareness about the war in Yemen. There is very little news about Yemen as is, and (Druzin’s) move — albeit risky — definitely sparked people’s interests. At the least it has made people talk about the war in Yemen and how it relates to the manufacturing of bombs in the U.S.”

Druzin hopes that his protest will also inspire other Palo Altans, specifically PAUSD students, to stage their own protests to call attention to Lockheed Martin’s provision of weapons to Yemen.

Druzin said, “I wanted to set an example of saying, ‘Hey, you know, anyone can do this.’”