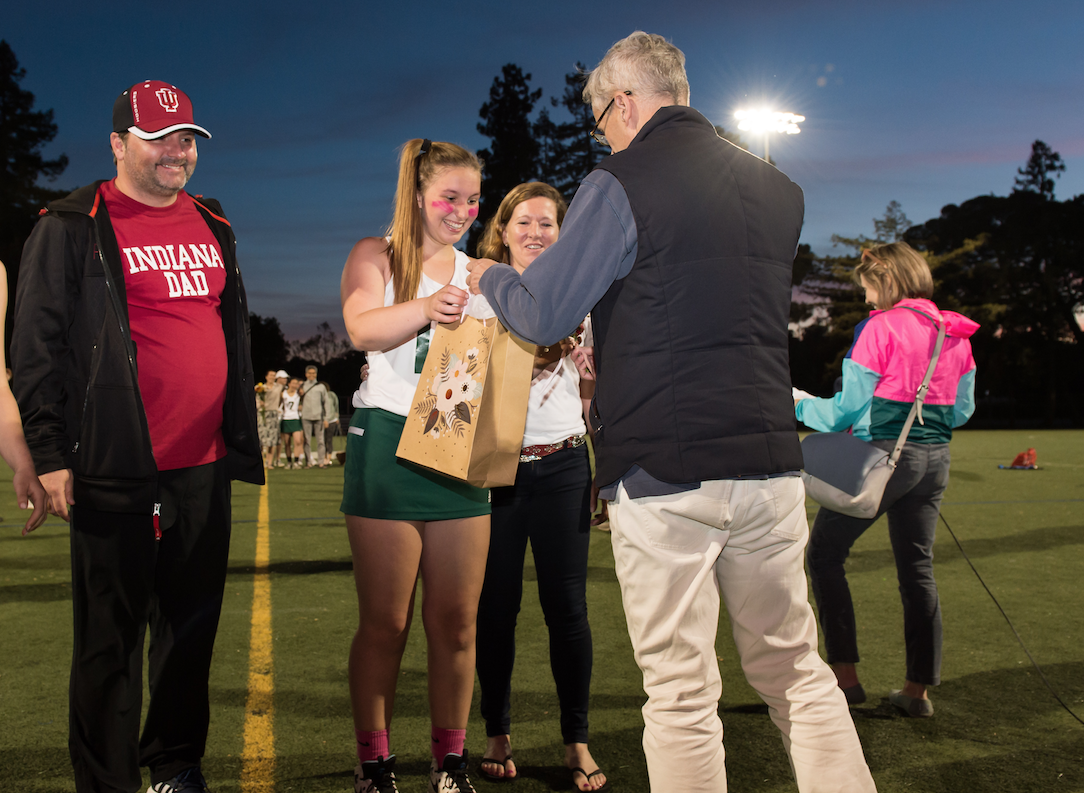 As senior Fabi Teofan walks up to the home plate, softball bat in hand, her friends and family cheer her on from the stands wrapped in green and white streamers.

While the team members’ siblings enjoy similarly colored cupcakes, Teofan’s parents excitedly wave posters and hide their congratulatory bouquets. This is not an average softball game — it is Senior Night.

Senior Night is a high school tradition shared by all sports. It is a time for teams to celebrate their graduating senior players with posters, flowers, gifts and speeches. Throughout her high school athletic career, Teofan said she eagerly anticipated her turn for Senior Night.

“I felt excited because I had seen this same day play out for three years now,” Teofan said. “Except those times I was the one giving the flowers, making the posters and writing the speeches; now, I was on the receiving end.”

Hours of preparation from both teammates and families went into planning softball Senior Night, according to coach Brooke Binkley.

“We started talking about it a few weeks ago,” Binkley said. “The parents, luckily, helped out and got all the extra stuff like snacks and flowers.”

Each of the non-senior softball players are assigned to a senior to honor with posters, a heartfelt speech and gifts.

“During fifth period, we hang up the posters and green and white streamers around the field and bleachers,” junior softball player Ella Jones said. “And then we have our pregame senior night ceremony where our coach gives speeches and flowers to the seniors, then we play and win the game, and the post-game meeting is filled with tears and pictures and love and snacks.”

The non-seniors enjoyed how they could creatively honor their seniors.

“Each of us could do anything we wanted with our posters so it was really fun to see each person’s creativity. I think all of the seniors really like their posters and how they were all different.”

Binkley had coached some of them since they first joined the team in 2015.

“It’s emotional,” Binkley said. “I’ve watched them grow up. It’s bittersweet for me to see them graduate.”

Among different sports, senior night traditions are not dissimilar.

The boys soccer team, for instance, also get posters made for them and a flower lei after the game.

Additionally, the senior players give flowers to their parents to thank them for supporting them.

“We didn’t really have a party or anything,” senior soccer player Juan Aguila said. “(But) our parents all came together to make our posters, and we each got flowers to take pictures of them.”

Senior night also allows athletes to look back on how far they’ve come.

“Playing as a senior is special because you know it’s your last chance to perform, so you want to do your best,” senior soccer player Nathan Seto said. “It’s also special to be able to represent your school with classmates that you don’t ever play with again.”

The swimming team also has similar Senior Night traditions, which take place on their last meet.

“We (the seniors) were recognized during the break when we were given white roses while we stood on top of blocks and announced our names and where we were going,” senior swimmer Megan Lee said. “We also recognized the other team and their seniors.”

Each senior was featured in a slideshow and the seniors announced their post-Paly plans to the crowd. Additionally, the coach gave speeches about each senior athlete.

Senior Night is a reminder to the team that the seniors are moving on, and it is often emotional for them, other team members and coaches.

“It is definitely the best event of our season,” Jones said. “Yet, it is so bittersweet to say goodbye to your most beloved teammates, and it gets harder every year.”

While it may be difficult to leave teammates and coaches, many graduating seniors see Senior Night as a touching experience.

“I think Senior Night made me step back from the go-go-go of the season and showed me that I really only have another week with these girls.”

“Then I am done with softball, a sport which I have been playing since I was 6,” Teofan said. “Senior Night, and all the appreciation that my teammates showed, meant the world to me.”