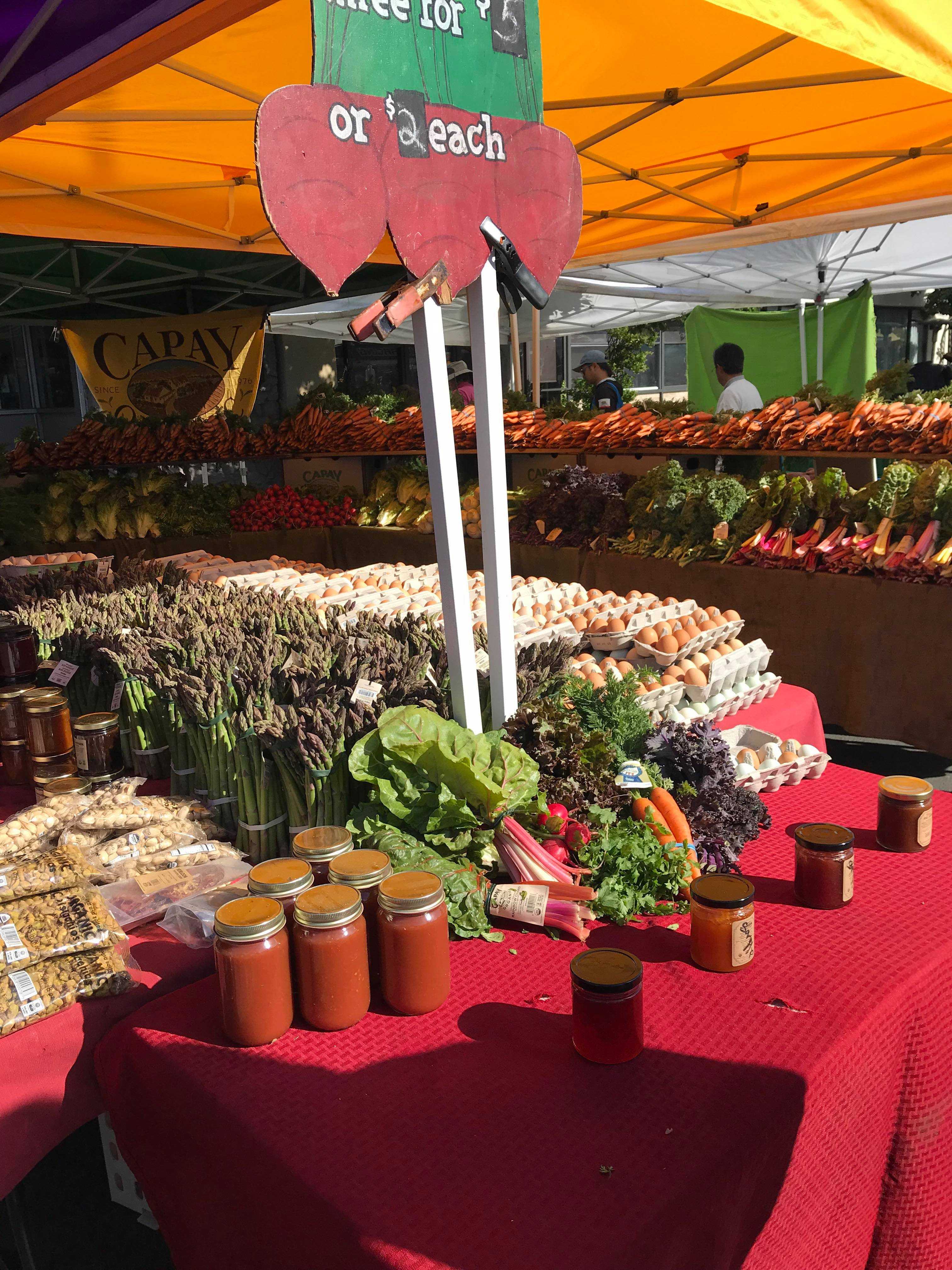 As the cold and rainy winter is left in the past, the warm and blooming spring season approaches.

Spring brings new energy to our community; with constant sunny weather as April showers are left behind, Palo Alto becomes vibrant and active. One location you will be sure to find a variety of lively people at is the farmers markets.

Palo Alto hosts two farmers markets every weekend: the Downtown Farmers Market on Saturdays, and the California Avenue Farmers Market on Sundays. Both markets boast a variety of vendors selling items ranging from fruits and vegetables to jewelry from across the Bay Area.

Kevin Lynch is a vendor who runs The Mulberry Guy, a berry stand at the Downtown Farmers Market. Lynch said he grows all his produce and products out of his family’s backyard in Palo Alto.

“The business began when we moved to Palo Alto in 2003,” Lynch said. “My wife Monica and I scraped our backyard clean and started over by picking berry bushes and trees from a rare fruit catalog. The mulberry tree was one of those.”

From that year on, Lynch said he continued purchasing more mulberry trees, eventually getting the idea to make a farmers market-type business for him and his sons.

However, this proved to be a more difficult task than he initially thought. According to Eva Heninwolf, the president of the Downtown Farmers Market for the past 18 years, in order to own and host a booth at the farmers market, one must go through an application process and pass certain health requirements.

“Agricultural producers, people who produce fruits and vegetables, need to be permitted by the Santa Clara Agricultural Department,” Heninwolf said. “This involves some inspections, which they have to do on their own. Then they present us their permit and we invite them into the market. For the other side of the market they have some environmental health requirements through the Santa Clara County Environmental Health Department.”

But since Lynch received his permit to host a booth at the Downtown Farmers Market, his business has expanded dramatically.

“Because the farmers market is usually filled with families and friendly faces, this was the perfect location to uphold Magical Bridge’s mission of spreading kindness, and we did so through free face painting,” Daniel said. “We also got to benefit from this because interested families were more likely to approach our booth so we were able to inform more people about upcoming magical bridge projects and fundraise as well.”

Junior Max Valasek works at Prevedelli Farms, a family-run farm in Watsonville every Sunday at the California Avenue Farmers Market.

“One of my team members from diving was an employee at the booth and said they were looking got new people to hire,” Valasek said. “She suggested I try it out and I have been working there for over three years now.”

According to Lynch, working at the farmers market provides students with beneficial  work experience.

Farmers markets in Palo Alto have been around for 30 years, and have brought in many regulars. Many visit the same stands and get to know the employees and products, according to Valasek.

“I love getting to know the customers and vendors at the market. We have many regulars that come by every week and it wouldn’t be the same without them.”

The farmers market has attracted vendors and customers alike throughout its time in Palo Alto.

If you go to our (farmers) market on Saturdays, you can see some vendors who have been here since it began over 30 years ago. You can see some vendors have gone on to become even bigger retailers. But most importantly, you will see people who have been at this market for decades. The way that they see each other on a weekly basis is heartwarming.”