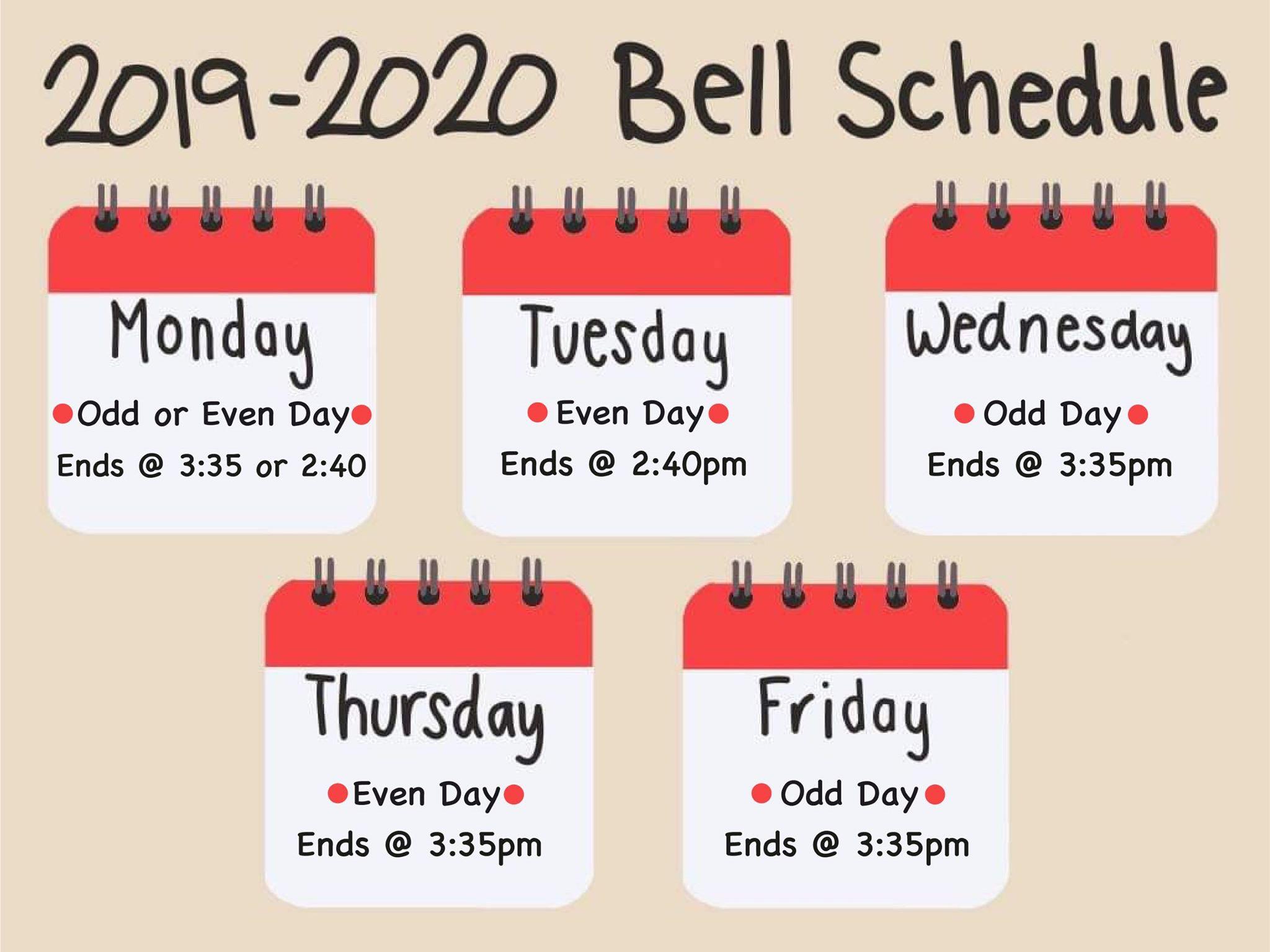 As the bell schedule reaches its third iteration in three consecutive years, students and faculty alike have mixed feelings regarding the benefits and drawbacks of the new schedule.

This year’s schedule features a rotation between even and odd days on Monday and a fixed schedule for the rest of the week. This results in two even days in a row on alternating weeks and consistent end times Tuesdays through Fridays.

According to economics teacher Debbie Whitson, this consistency makes it easier to plan the rest of the week.

Whitson also said consistent end times are beneficial to students who work after school, making it easier for them to commit to work or extracurriculars.

Junior Joyce Lin agrees “for four days of the week I know when school ends, so it is easy to make plans for the future,” Lin said.

However, this increased consistency comes at a cost. Both students and faculty have voiced concerns over the two consecutive even days that occur Monday and Tuesday on alternating weeks.

“Sometimes for even classes, I will have (homework) due the next day, whereas last year we had at least a day … between the two classes where we could work on the assignment,” senior Prahalad Mitra said.

Other students worry about the additional stress that back-to-back even days could cause by reducing the time that students have to complete homework.

“It creates a lot of stress because you need to cram all of your homework and extracurricular activities into one night,” said sophomore Austin Xiang.

Because of this, Whitson said it may become necessary for teachers to alter lesson plans to accommodate the back-to-back class periods.

“I haven’t adjusted anything yet, but I could foresee thinking through Monday and Tuesday differently,” Whitson said.

This new schedule is the result of several years of calendar-related turmoil. The schedule created  by the Innovative Schedule Committee (ISC) during the 2017-2018 school year, spearheaded by former Principal Kim Diorio, contained consistent end times, the elimination of C days (days with all seven classes), the introduction of late-start days, and did not have any classes that occurred on consecutive days.

Although these changes were met with widespread approval among the Paly community, the schedule was rejected by a state auditor on the grounds that it did not contain a sufficient number of instructional minutes. This led to an alternate schedule being implemented, at the last minute and after Diorio’s resignation, for the 2018-2019 school year.

While the ISC incorporated student input in their deliberations by sending out surveys and including student representatives on the committee, the subsequent schedules have only utilized surveys.

“We sent out a survey to students, to parents, and to staff members about what we should tweak this year, if anything,” principal Adam Paulson said.

Regardless, Mitra felt that students should have a more significant say in the creation of the new schedule, similar to the ISC model of student representatives in addition to surveys.

“I would like students to have a bit more of a say because we are the ones that are actually experiencing the days,” Mitra said. “We know what we like and what we don’t like.”

Overall, however, Lin was appreciative of the balance of benefits achieved by the new schedule.

“I think C days suck, and last year’s schedule was kind of inconvenient, but two even days in a row isn’t that good either, so I’m not complaining that much because I don’t see a better way to improve it,” Lin said.

Andrea Struve, a history teacher and former teacher representative to the ISC, agrees.

Struve said, “Any schedule created is not perfect, but this one does address a lot of needs found (i.e. keeping consistent start times, increasing consistency, increasing student support time for all students with tutorial, increasing staff collaboration time) while adhering to both California Education Code laws and auditor feedback.”

Paulson also emphasized that the schedule is likely to remain the same for at least the next few years.

“We plan on sending out more surveys this year to see if there is anything we can change,” Paulson said. “I don’t envision changing the schedule soon, but I would like to get feedback, synthesize it, and put it into action.”