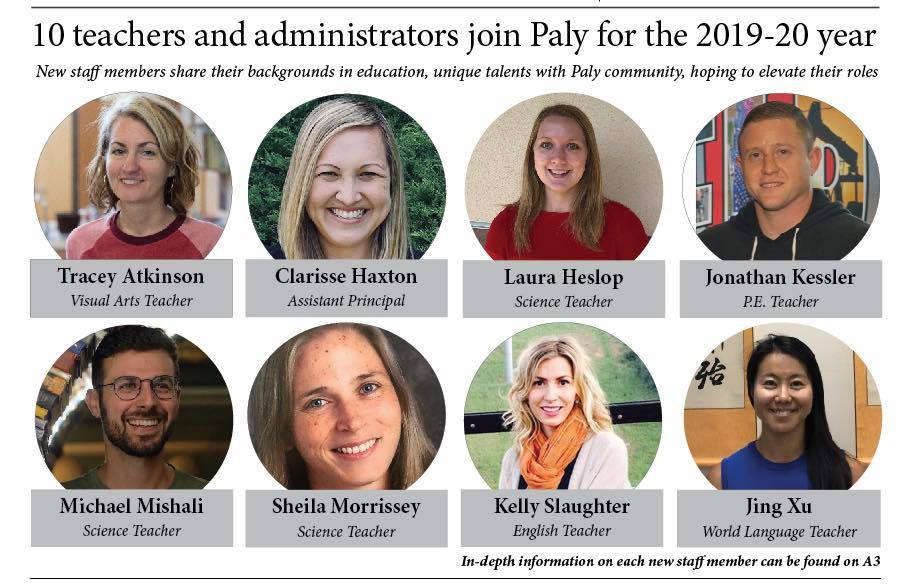 isual Arts teacher Tracey Atkinson has loved art as long as she could remember.

“Helping students to find ways to express themselves and gain confidence in their abilities to think creatively is very rewarding,” Atkinson said.

Atkinson taught art in Pennsylvania and then at Santa Clara High School. A reason she wanted to teach at Paly was because she believes in the school’s values.

“Both encouraging creativity and independent thinking, and fostering growth and learning as an essential part of life are both important to me,” Atkinson said. In addition to loving drawing, painting and creating digital art, the artistic Atkinson loves traveling.

ssistant Principal Clarisse Haxton grew up on Guam. Her dad was Chamorro, Japanese and Filipino, and her mom was white.

“Growing up multiracial taught me to appreciate multiple perspectives and to care about getting to know people as individuals,” Haxton said.

Before coming to Paly, she worked in District Office as a program evaluation coordinator .

efore coming to California, teacher Laura Heslop lived on Oahu for two years and majored in Dance Performance in college. “I teach biology, and I enjoy teaching this subject because it is exciting to guide students through understanding life and phenomena that surround us,” Heslop said. “I was thrilled to return to PAUSD after completing my master’s degree, as I greatly enjoyed the students, colleagues, and families I previously worked with in the district.” Heslop also previously taught at Greene Middle and Gunn High School.

onathan Kessler splits his time working at Paly as a wrestling coach and teaching zero period PE class with being a PE teacher at Addison Elementary. Kessler began as a Paly wrestling coach in 2015.

“Luckily the next year kindergarten opened up to a full day and there was a need for an elementary PE teacher,” Kessler said. “I received the position and it’s been an amazing experience.” Before working at Paly and Addison, he worked for 1 year as an elementary PE specialist in the San Francisco Unified School District.

ichael Mishali taught at Greene Middle School from 2013-2017 before coming to Paly.

“I know chemistry can be really heady and nuanced, but I think it’s fascinating. I hope that I can help kids feel successful and interested in Chemistry,” said Mishali. “Of course I find the content itself to be interesting, but I like that I can (hopefully) be a part of a kid’s positive educational story, a story in which that student feels good about themselves as a person and a student in science class.”

“Like middle schoolers, high schoolers are complex and interesting, but because they’re older, we get to have different, bigger, deeper conversations about life and science; I think that’s really special.”

long with many other teachers, physics teacher Sheila Morrissey taught at Greene last year. “It’s been fun to see some of my former students at Paly,” said Morrissey. Growing up in going to the  Palo Alto schools, she has always enjoyed learning about the natural sciences. “I came to Paly because I enjoy working with our community. “The students, teachers, aides, custodial staff, counselors, administration, tech team-everyone- has been so welcoming.”

he first time Caterina Porcella ever learned Spanish was in 7th grade when she attended Greene middle school, where she would end up teaching there for 14 years.

Porcella attended both Paly and Greene when she was a student. Porcella also loves traveling and learning about other cultures with different culinary traditions.

She started teaching at Paly due a shift in the number of students at Greene and Paly.

“I wanted to work only 60% because I was also taking care of my elderly mother and Paly had a 60% Spanish position so I was transferred over to Paly,” said Porcella.

efore teaching at Paly, Kelly Slaughter taught 7th grade at Fletcher Middle School. She loves teaching English because of the creativity that comes with Project Based Learning.

“I wanted to grow professionally and Paly’s English department is well received in our community,” Slaughter said when asked about her reasons for coming to teach in Palo Alto. “Also ,” she said, “the students are simply amazing.”

She has two daughters at home, Sophia and Bella. When she’s not teaching, Slaughter likes to volunteer in schools. “I also am a Barry’s Bootcamp Ambassador at the Stanford Mall,” said Slaughter, enjoying pilates.

efore coming to work here, Xu taught in the Sequoia Unified High School District after graduating from the teacher education program at Stanford. Mandarin teacher Jin Xu is not only passionate about the language, but also the culture surrounding it.

“It’s the language I speak and the culture I’m passionate about,” said Xu. Besides teaching a language at Paly, Xu teaches vinyasa and restorative Yoga at Yoga Wave Cupertino. She also owns an electric unicycle and skateboard. Xu loves Paly because of the community. “I like the students, my lovely colleagues in the World Language Department, the friendly staff at school, and the convenient access of various yummy food and Boba across the street.”

Editor’s note: Two new staff members did not respond to our request for photos and/or interviews.