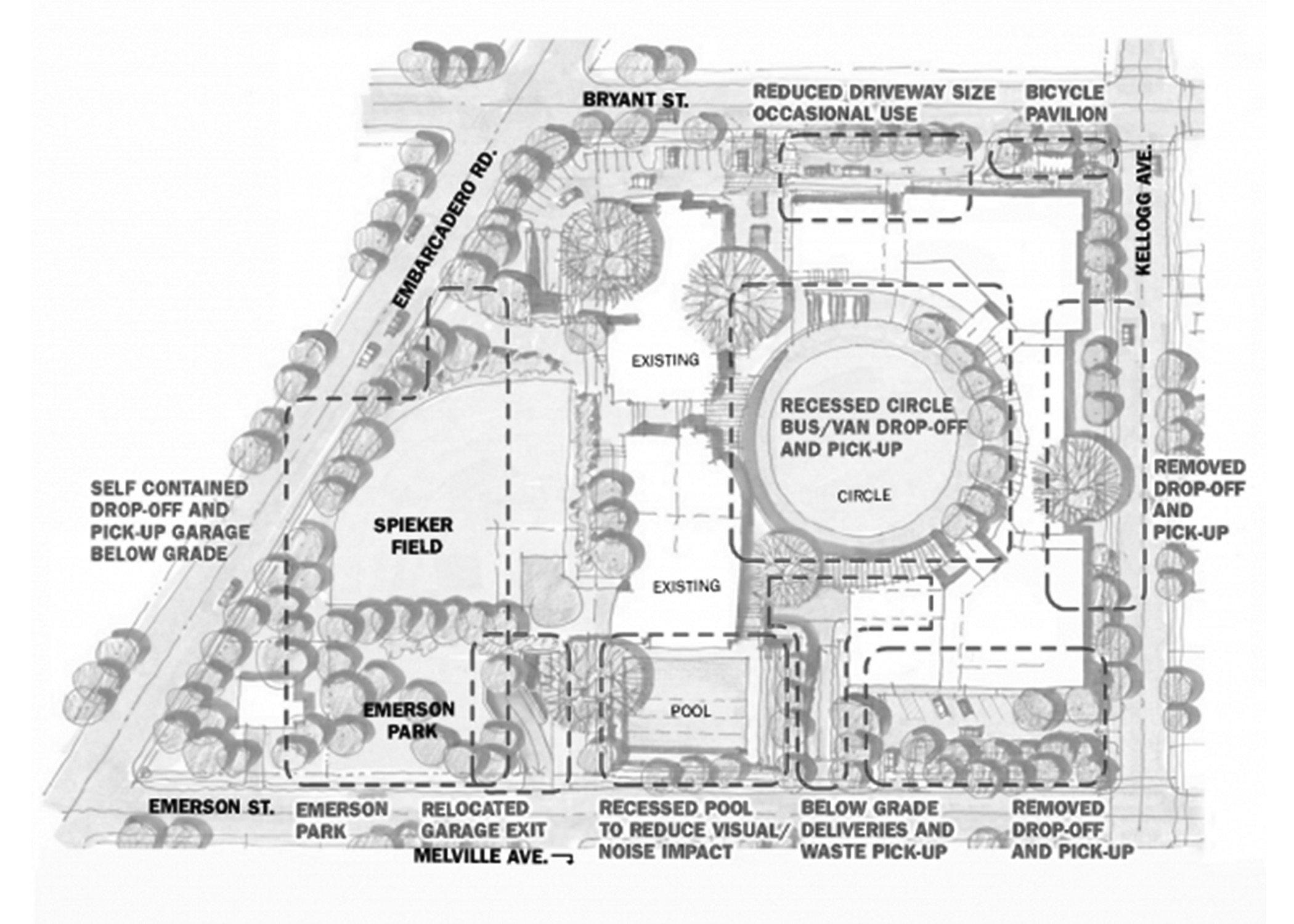 For the past six years, Castilleja has been waging a high-profile fight against neighbors who want to stop its plans for new construction. But behind the scenes, the private girls’ school is undergoing an equally important rebuilding project — Castilleja is moving to eliminate most, if not all, Advanced Placement classes from its curriculum and replace them with alternative courses it developed  itself.

These ambitious reconstruction projects­ ­­­— one externally facing and one focused inward — ­ could potentially reshape the school in ways that cannot yet be foreseen.

Yet while the building plans have been aired and debated publicly, it won’t be until this fall that the Castilleja administration will release an official statement regarding its new academic plan.

Nevertheless, the tentative plan to create so-called “Advanced Topic” courses as a replacement for most AP classes has made its way throughout the campus community through Castilleja’s student body.

According to Castilleja junior Liah Nudell, the shift in academia is meant in part to help reduce stress and toxic competition among students.

“Although I understand the mission behind removing the title of AP, I don’t believe much will come from this,” Nudell said. “They plan on renaming those formerly AP courses to AT;  they are more or less the same thing. The newly implemented course will just regress back to their competitive AP nature.”

In addition to impacting the student body, this shift would also give more freedom to the school’s teachers who wouldn’t have to follow a set AP curriculum geared to a test.

“The administration doesn’t want the teachers to have to teach solely for one test because it’s super binding for them,” Nudell said. “The only part about this shift that I’m slightly worried about is the fact that colleges might not find ‘AT’ courses as credible as ‘AP’ courses when deciding who to admit.”

In addition to the removal of AP courses from Castilleja’s curriculum, the school continues to advocate for its expansion plan to increase student enrollment.

Proposals to modernize the Castilleja  campus and expand enrollment have polarized the neighboring community. The Old Palo Alto neighborhood surrounding the private school is dotted with expressive and divisive yard-signs.

Castilleja Reimagined, Castilleja’s proposed project, aims to increase the capacity of the campus as well as student enrollment by creating an underground parking space and reconstructing multiple buildings on the campus while keeping the middle school and high school at the same location.

With Castilleja’s aim to gradually expand its student population from 415 to 540, many believe that traffic will become unavoidable even though Castilleja would have to commit to a capacity on vehicle trips during drop-off and pick-ups hours.

Yet amid the criticism, many surrounding neighbors and students have lauded the school’s efforts to reduce traffic.

According to Joe Rolfe, who lives near the school, the expansion would not only be disruptive to neighboring residents but to students at Castilleja as well.

Rolfe has been an advocate for prohibiting the expansion of Castilleja in its current location. He, like many other residents in the area, are concerned that Castilleja’s expansion plan coupled with Stanford’s plan to build more housing would overwhelm local streets with traffic.

“With [Castilleja’s] wish to expand, one of the densest campuses in Palo Alto will become even more concentrated with students,” Rolfe said. “Even with their current population of over 400 students, they already have a large impact on the community with traffic and noise. Expanding the school would only increase this. They have reached out to residents like me, but their responses have not been cooperative or transparent.”

According to Castilleja junior Violet Glickman, the expansion plan would leave students to study in portables and prevent them from using their complete campus for the duration of the multi-year project.

“We are going to  be seniors next year, and we want to have all the same privileges and traditions that come with our school, and if we are under construction, you can’t do them,” Glickman said. “As far as I know, a lot of Castilleja girls are not in favor of the expansion. It seems like a hassle that would affect not only us but the community as a whole.”

According to Glickman, one of the most prevalent misconceptions about the expansion plan is that students are working together with the administration to make it a possibility.

Residents in favor of the expansion program say in order to further advance Palo Alto’s education, supporting local schools, public or private, is a necessity.

According to one resident who lives near  Castilleja, who agreed to be interviewed only if she remained anonymous, living in a community where education is highly valued is one of the most desirable aspects of Palo Alto. She asked to remain anonymous as many of her neighbors who also live near Castilleja are against the expansion plan, while she believes it is necessary to better the educational system.

“The potential traffic and parking issues are just a part of our lives,”  the neighbor said. “We live in a semi-urban metropolitan community with some density, and we have students all around us. Just deal with it. I like being surrounded by students. I think it is what makes our daily life in Palo Alto feel very vibrant.”

Potential solutions to the controversy suggested by local residents, like Rolfe, involve a possible land-swap with the Stanford campus. Essentially, the idea would give Stanford the grounds of the current Castilleja School, and in return, Castilleja would receive about 10 acres of unused Stanford area. This would mitigate the amount of disruption the expansion would inflict onto the neighboring community, and offer better utilization of Stanford’s land, the advocates believe.

According to Rolfe, the swap proposal would allow Castilleja to expand its campus without further crowding the already overpopulated streets of Palo Alto.

“The obvious solution is to move the campus,” Rolfe said. “(Castilleja’s) response is that a suitable site is not available, but I have been advocating for years for Stanford to trade their land for Castilleja. Stanford has over 1,200 acres, and I know that they can spare 10. I’m sure Stanford would also love to get six-and-a-half acres in a residential neighborhood, especially considering our housing crunch.”