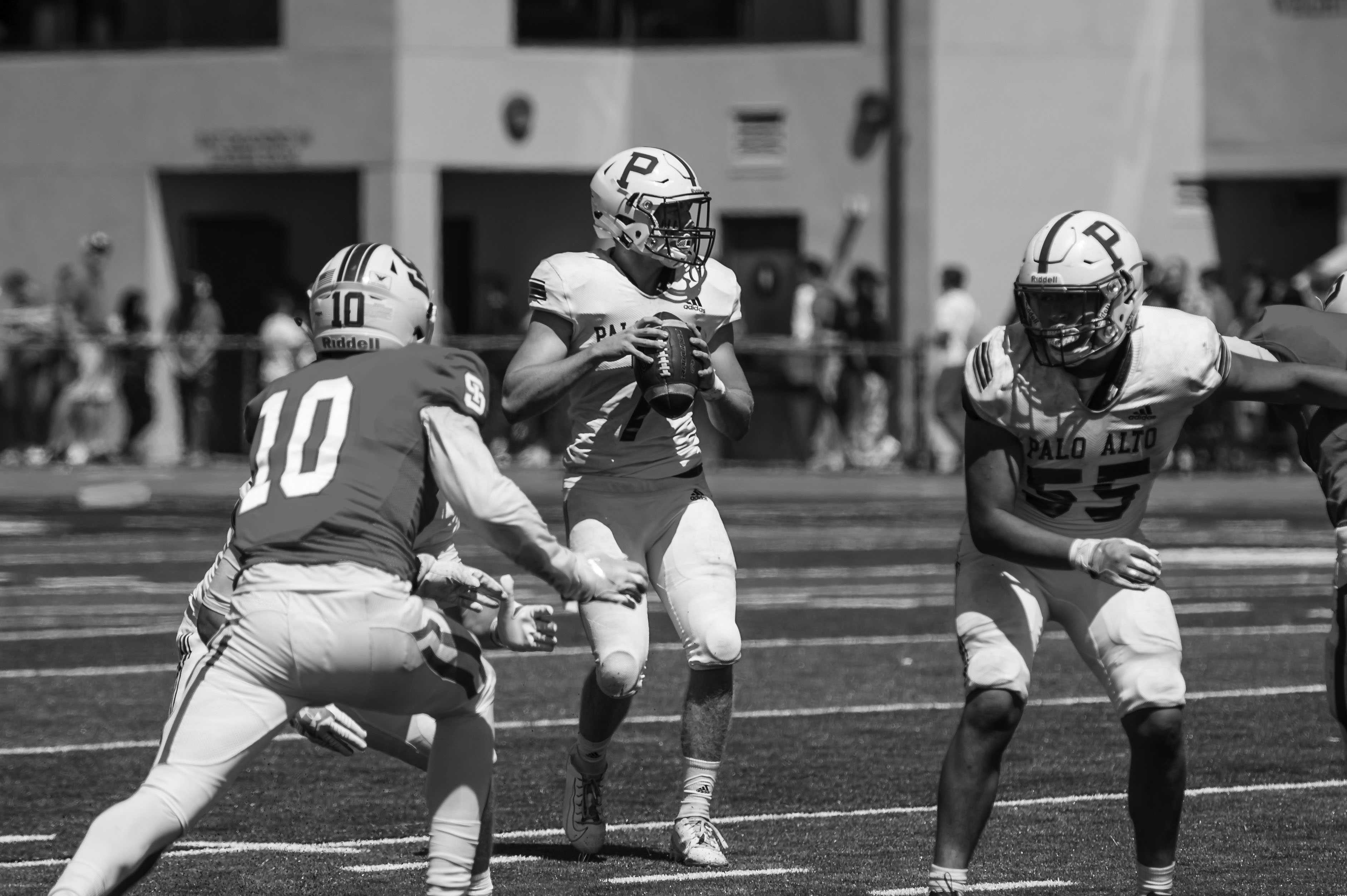 Under Coach Nelson Gifford, scanning for an open player, senior Kevin Cullen prepares to throw the ball in a game against St. Ignatius.

After a successful 2018 season, the Paly football team is looking to continue improving and advancing in the Central Coast Section competition.

Coach Nelson Gifford joined the team last year, causing significant improvement. Under his guidance, the team had a great season and made it to the CCS semi-finals. According to senior captain Louis Passarello, Gifford brings good energy to the team and works hard for their success.

“I don’t think there’s anything negative about Coach Gifford,” Passarello said. “He’s an awesome guy (and) shows up everyday. He goes above and beyond. In the offseason, he’s in the weight room at 6 a.m. He’s dedicated, this is what he wants to do.”

According to sophomore running back Josh Butler, Gifford is extremely effective not only because he has great leadership, but also because he keeps football fun for players and does not get caught up in all the pressure.

“The main thing with our coaches is that they make it a sport, not a job,” Butler said. “They make a great atmosphere to work extremely hard and make us compete at our best, but at the same time they keep it as it should be: fun.”

For Paly football, a main component of their success is the amount of effort put in during both practices and games. Both Gifford and the team recognize that effort sets Paly apart and is what led to last year’s success.

“What makes us special is the fact that no matter the talent we have, with the guidance of our coaches, we all know that we are going to have the most effort out of anyone on the field,” Butler said.

Gifford shares this view with Butler.
“There’s no such thing as extra work,” Gifford said. “We do the work that is necessary, no more, no less”

This year, Paly football has the smallest team they’ve had in many years, with their roster down to 28 players. This means many players will have to play both offense and defense, posing a great challenge to the team. However, this will also serve as an opportunity to give players experience in different positions.

“Our team is smaller this year, which means a lot of the guys will have to step up in ways they didn’t have to last year,” Passarello said. “Last year, we only had one player going both ways. Now we have more but that’s not a bad thing —we’re still working hard.”

Another challenge the team will face is the tough competition coming from other schools.
“The challenges this year are the same as any year,” Gifford said, “We have strong opponents, we have to learn how to play together, we have to stay healthy, and we have to be able to adjust.”

All in all, prospects are looking successful for Paly football this year and the team is excited to show off their hard work and play their hearts out.